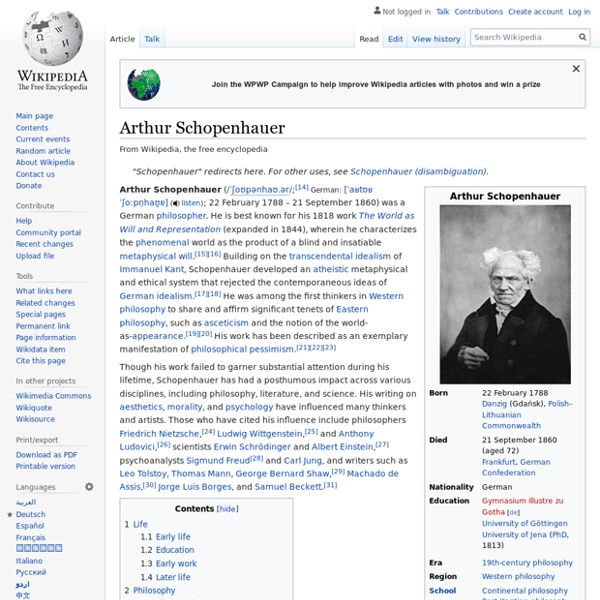 German philosopher Arthur Schopenhauer (;[14] German: [ˈaʁtʊʁ ˈʃoːpn̩haʊ̯ɐ] ( Though his work failed to garner substantial attention during his lifetime, Schopenhauer has had a posthumous impact across various disciplines, including philosophy, literature, and science. His writing on aesthetics, morality, and psychology have influenced many thinkers and artists. Those who have cited his influence include philosophers Friedrich Nietzsche,[24] Ludwig Wittgenstein,[25] and Anthony Ludovici,[26] scientists Erwin Schrödinger and Albert Einstein,[27] psychoanalysts Sigmund Freud[28] and Carl Jung, and writers such as Leo Tolstoy, Thomas Mann, George Bernard Shaw,[29] Machado de Assis,[30] Jorge Luis Borges, and Samuel Beckett.[31] Life[edit] Early life[edit] Schopenhauer's birthplace house, ul. In 1797 Arthur was sent to Le Havre to live for two years with the family of his father's business associate, Grégoire de Blésimaire. Education[edit] Early work[edit] Schopenhauer in 1815. Later life[edit]

Pierre-Jules Hetzel A typical Jules Verne book cover as published by Hetzel. The edition is Les Aventures du Capitaine Hatteras au Pôle Nord, type "Aux deux éléphants". Pierre-Jules Hetzel (January 15, 1814 – March 17, 1886) was a French editor and publisher. He is best known for his extraordinarily lavishly illustrated editions of Jules Verne's novels highly prized by collectors today. Biography[edit] Hans Fallada Hans Fallada (German: [hans ˈfa.la.da] ( Early life[edit] Fallada was born in Greifswald, Germany, the child of a magistrate on his way to becoming a supreme court judge and a mother from a middle-class background, both of whom shared an enthusiasm for music, and to a lesser extent, literature.

Jean-Baptiste Lamarck 18th and 19th-century French naturalist Lamarck fought in the Pomeranian War (1757–62) against Prussia, and was awarded a commission for bravery on the battlefield.[3] Posted to Monaco, Lamarck became interested in natural history and resolved to study medicine.[4] He retired from the army after being injured in 1766, and returned to his medical studies.[4] Lamarck developed a particular interest in botany, and later, after he published the three-volume work Flore françoise (1778), he gained membership of the French Academy of Sciences in 1779. Lamarck became involved in the Jardin des Plantes and was appointed to the Chair of Botany in 1788. When the French National Assembly founded the Muséum national d'Histoire naturelle in 1793, Lamarck became a professor of zoology.

Lawless From Wikipedia, the free encyclopedia Jump to navigationJump to search Lawless may refer to: Arts, entertainment, and media[edit] Other uses[edit] See also[edit] Small Moral Works Small Moral Works (Italian: Operette morali [opeˌrette moˈraːli]) is a collection of 24 writings (dialogues and fictional essays) by Italian poet and philosopher Giacomo Leopardi, written between 1824 and 1832. The book was first published in 1827, then in 1834, with changes, and in its last form in Naples (1835), in a censored edition; Antonio Ranieri, a longtime friend of Leopardi's, had it published in the original text in 1845. The works reflect the conviction that reason, far from being the cause of man's unhappiness, is the only means by which man can avoid despair. Leopardi reached this final point of his reflection about human condition in the years 1822-1824, and in 1824 he conceived the "Operette morali", which collect and elaborate in a dramatic and ironic expression the philosophical research developed in the Zibaldone. In this period, Leopardi, believing that his lyrical voice has vanished, devotes himself to philosophical prose. Analysis[edit]

The Man in the High Castle 1962 novel by Philip K. Dick The Man in the High Castle is an alternate history novel by American writer Philip K. Stendhal Marie-Henri Beyle (French: [bɛl]; 23 January 1783 – 23 March 1842), better known by his pen name Stendhal (, ;[1][2][3] French: [stɛ̃dal, stɑ̃dal]),[a] was a 19th-century French writer. Best known for the novels Le Rouge et le Noir (The Red and the Black, 1830) and La Chartreuse de Parme (The Charterhouse of Parma, 1839), he is highly regarded for the acute analysis of his characters' psychology and considered one of the early and foremost practitioners of realism. Life[edit] Born in Grenoble, Isère, he was an unhappy child, disliking his "unimaginative" father and mourning his mother, whom he passionately loved, and who died when he was seven. He spent "the happiest years of his life" at the Beyle country house in Claix near Grenoble.[citation needed] His closest friend was his younger sister, Pauline, with whom he maintained a steady correspondence throughout the first decade of the 19th century.