Summary of A Midsummer Night's Dream. TL;DR: People get lost in the woods. 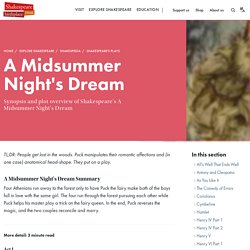 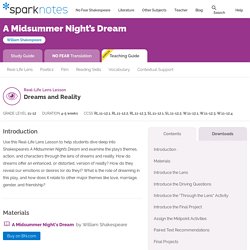 How do dreams offer an enhanced, or distorted, version of reality? How do they reveal our emotions or desires (or do they)? What is the role of dreaming in this play, and how does it relate to other major themes like love, marriage, gender, and friendship? To activate students’ thinking, choose one or two of the following Real-Life Links to use in an engagement activity. Have students read or watch and discuss the content. Pose the Following Big Idea Questions to the Class: A Midsummer Night’s Dream: Act I, scene i. Summary: Act I, scene i The course of true love never did run smooth. . . .See Important Quotations Explained. Module 1 - E340 Critical Literacy Modules. Module 1 Below you will find directions for Part 1, Part 2, and Part 3 of Module 1. 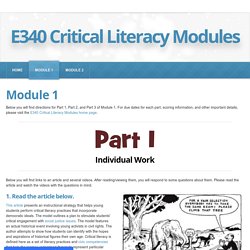 For due dates for each part, scoring information, and other important details, please visit the E340 Critical Literacy Modules home page. Individual Work Below you will find links to an article and several videos. After reading/viewing them, you will respond to some questions about them. Critical Literacy Activities - Critical Literacy in S.S. Matilda lessons. Free Summary of The Westing Game by Ellen Raskin. The Westing Game Setting and Character Analysis. The outskirts of Westingtown, which is situated on Lake Michigan in Milwaukee, Wisconsin. 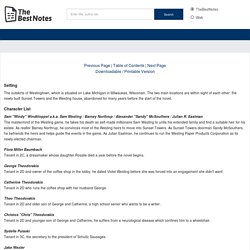 The two main locations are within sight of each other: the newly built Sunset Towers and the Westing house, abandoned for many years before the start of the novel. Character List Sam "Windy" Windkloppel a.k.a. Sam Westing / Barney Northrup / Alexander "Sandy" McSouthers / Julian R. Introduction - Murder Mystery: The Westing Game. It was Professor Plum with the candlestick in the library. 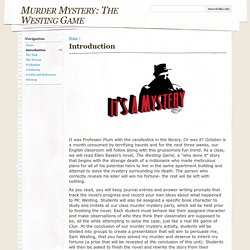 Or was it? October is a month consumed by terrifying haunts and for the next three weeks, our English classroom will follow along with this gruesomely fun trend. (278) The Westing Game. THE WESTING GAME - ENGLISH : ELLEN RASKIN : Free Download, Borrow, and Streaming. That I did always love by Emily Dickinson. Learn grade 9 English language arts. Life of Pi by Yann Martel. Before your students read the novel Life of Pi, ask them to think about television shows and movies about survival, such as "Castaway," "Lost," or "Titanic. 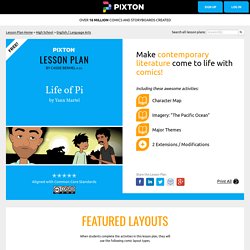 " What was it that they liked about the characters in those movies? Ask students where they got their own name from, or to share a story behind their naming. An important quote from the story is: “I know zoos are no longer in people’s good graces. Religion faces the same problem. How to Teach Life of Pi. The Outsiders Lesson Plans: Cooperative Learning Lesson Plan - BrightHub Education. 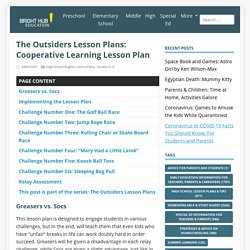 Socs This lesson plan is designed to engage students in various challenges, but in the end, will teach them that even kids who have “unfair” breaks in life can work doubly hard in order succeed. Greasers will be given a disadvantage in each relay challenge, while Socs are given a slight advantage. Just like in S.E. Seneca - Learn 2x Faster. Monster by Walter Dean Myers Essay. Characters' & Style Analysis. Alongside with his poems, in 1999, Walter Dean Myers presented an excellent drama novel, Monster, about one 16-year-old black kid, Steve Harmon, who was charged with felony murder. 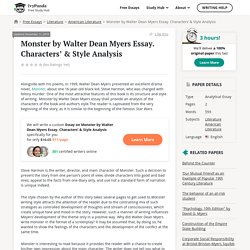 One of the most attractive features of this book is its structure and style of writing. Monster by Walter Dean Myers essay shall provide an analysis of the characters of the book and author’s style.The reader is captivated from the very beginning of the story, as it is similar to the beginning of the famous Star Wars. Steve Harmon is the writer, director, and main character of Monster. Such a decision to present the story from one person’s point of view, divide characters into good and bad ones, appeal to the facts from one diary only, and use not a standard form of narration is unique indeed. Monster by Walter Dean Myers Myers – Livaudais-Baker English Classroom. In this novel, a 16-year-old African American teenager is on trial for murder. 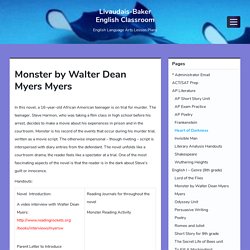 The teenager, Steve Harmon, who was taking a film class in high school before his arrest, decides to make a movie about his experiences in prison and in the courtroom. Monster is his record of the events that occur during his murder trial, written as a movie script. A Literary Analysis of Monster by Walter Dean Myers. Monster By Walter Dean Myers The main character in the novel Monster by Walter Dean Myers is 16-year-old Steve Harmon who has been arrested and put on trial for his part in a robbery in which a convenience store owner was killed. 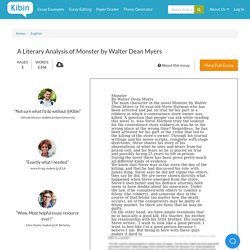 A question that people can ask while reading this novel is, was Steve Harmon truly the lookout for the convenience story robbery or was he in the wrong place at the wrong time? Regardless, he has been arrested for his part in the crime that led to the killing of the store's owner. Through his journal writings and his movie scripts, complete with stage directions, Steve shares his story of his observations of what he sees and hears from his prison cell, and his fears as he is placed on trial and possibly facing 25 years to life in prison. Monster Study Guide. Monster Analysis. Exposition (Initial Situation) Jailhouse Rock. Monster Analysis. Monster Literary Elements. Monster Questions and Answers The Question and Answer section for Monster is a great resource to ask questions, find answers, and discuss the novel. summarize steve's feelings about jail? View All Answers Help This flashback is when they were twelve years old.

View All Answers Did the verdict surprise you? This question calls for your opinion. View All Answers Ask Your Own Question. Owning Their Stories: Teaching Memoir at an Alternative High School by Amy Vizenor – Minnesota English Journal. Prom-Posal.