Yennayer, un moment de réconciliation avec soi: Toute l'actualité sur liberte-algerie.com. “Ras el-aâm” d’hier et d’aujourd’hui: Toute l'actualité sur liberte-algerie.com. Indigenous Canada. Joan C. Williams: Why corporate diversity programs fail. The fall of Afghanistan in 2021 is the result of years of American delusion. The Terror Facing Human-Rights Activists in Kabul. On Monday, as Kabul was overrun with Taliban fighters, and desperate Afghans rushed to the airport, President Joe Biden defended his decision to pull American forces out of Afghanistan, saying that U.S. interests were not served by continued involvement in what he referred to as a civil war. 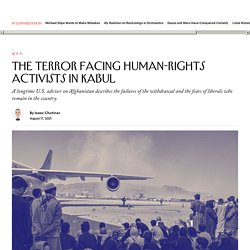 He also sought to shift blame for the chaos to the Afghan government, saying, “It is wrong to order American troops to step up when Afghanistan’s own armed forces would not.” How America Failed in Afghanistan. On Sunday, as the Taliban entered Kabul—the last remaining major Afghan city not under the group’s control—the President of the country, Ashraf Ghani, fled to Tajikistan, making clear that the U.S. 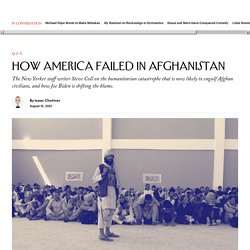 -backed Afghan government had collapsed. Five months ago, in April, President Joe Biden announced that all U.S. and NATO troops would be withdrawn from Afghanistan by the twentieth anniversary of the 9/11 attacks. Critics have accused the Administration of conducting a rushed, poorly planned, and chaotic withdrawal since then. On Thursday, the U.S. government announced that it would be sending in marines and soldiers to help evacuate embassy personnel. 1_5547999. OTTAWA -- It's on. 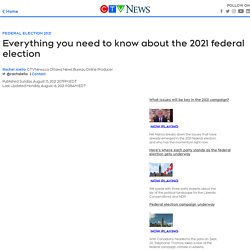 On Sunday, Justin Trudeau called a federal election, kicking off just over five weeks of campaigning before Canadians vote on Sept. 20. Who will you be voting for, and when, and where? When will the leaders vying to be prime minister debate each other? How will the pandemic change the race? Pathway linked to slower aging also fuels brain cancer - Siteman Cancer Center. While a particular metabolic pathway shows potential to slow down the aging process, new research indicates a downside: That same pathway may drive brain cancer. 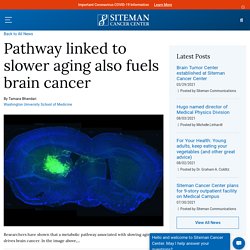 The pathway, known as the nicotinamide adenine dinucleotide (NAD+) pathway, is overactive in a deadly form of brain cancer known as glioblastoma, according to a study by researchers at Washington University School of Medicine in St. Louis. Glioblastoma is the most common and aggressive brain cancer in adults. Over 70 percent of patients with glioblastoma die within two years of diagnosis. 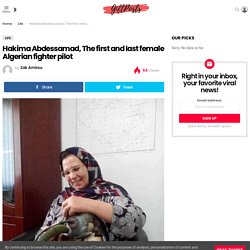 Without success, the guard refused him access that day. She turns back. Algeria Study 4. Young-algerian-tennis-player-wins-support-emotional-video-195958293. Algiers (AFP) - Ines Ibbou, a young Algerian tennis player who hit back at Dominic Thiem for saying he did not want to give money to lowly-ranked players, has drawn support from Venus Williams as well as her country's government. 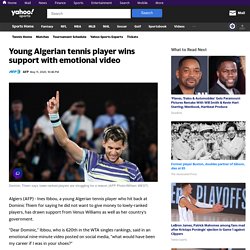 "Dear Dominic," Ibbou, who is 620th in the WTA singles rankings, said in an emotional nine-minute video posted on social media, "what would have been my career if I was in your shoes? " In April, Thiem, an Austrian ranked third in the men's game, said he was not happy with a plan supported by Roger Federer, Novak Djokovic and Rafael Nadal for top players to help those lower down the rankings who had lost their tournament income because of the coronavirus shutdown of tennis.

"None of them are going to starve," Thiem told an Austrian newspaper, explaining that "many, many" of those players had not made it to the top because they "don't put the sport above everything else". Global Animal Law GAL Association. Google Translate. Study at home with Kahoot! Winning coaches' locker room secret. The Nivea prank that had airplane passengers sweating.

Internal Server Error. A few years ago, scientists discovered that when they gave young blood to old mice, something pretty astounding happens in their brains. 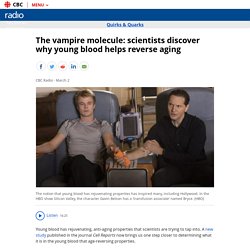 The older mice get more stem cells, produce more neurons, the connections between their neurons become stronger, and their spatial memory improves. The effects of aging in the brain are, in large part, reversed. Dr. 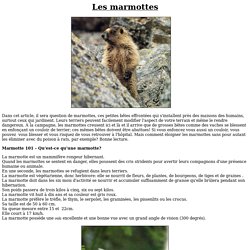 René Beauchamp, résident de Laval. Lyme disease on the rise in Canada, but doctors still confused about diagnosis - Toronto. Dan Buettner: Blue Zones: The Secrets of a Long Life. The Island Where People Forget to Die  The 50 coolest Kiwis ever (+photos) America has Elvis and Marilyn. 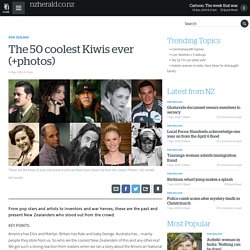 Britain has Kate and baby George. Medically assisted death allows couple married almost 73 years to die together. When George and Shirley Brickenden tell the story of how they met, it’s like watching a charming little play unfold – one the couple might have workshopped for seven decades. 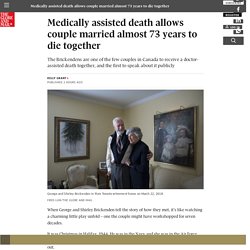 It was Christmas in Halifax, 1944. He was in the Navy and she was in the Air Force. Mr. Kivanc tatlitug. Beta 1.0. The privacy implications of DNA testing kits that can 'alter your life' - Nova Scotia. Help: I’m well-qualified but can’t get even an interview for jobs I want. Why is loneliness so toxic? Scientists are exploring what it does to the human body. Dr. Chris Fagundes wanted to study how loneliness affected the way people felt when they were ill. So the assistant professor of psychology at Rice University and his team recruited 213 healthy participants and asked them about how lonely and socially isolated they were. ‘Never apologize, never explain’ and other bad ideas for working with millennials. Associate professor at McGill University and an associate fellow at Green Templeton College, Oxford University. A famous quote is "never apologize, never explain. " I have heard this used by a number of executives.

I am not sure it's ever worked, but with millennials, I believe that you need to apologize easily and almost always explain. Story continues below advertisement One of the key elements of postmodern thought, which I argue is the worldview that universities have been teaching millennials, is that there is more truth with a small "t" than there used to be and that there are many more and diverse sources of it. News & Reviews Archives. High Fat, Low Carb Diet Might Epigenetically Open Up DNA and Improve Mental Ability. Could eating less carbohydrates and more fat relax DNA and boost mental function?

Researchers found that a ketogenic diet – consuming high amounts of fat, adequate protein, and low carbohydrates – increases an epigenetic agent naturally produced by the body. Uses for Extra Kombucha SCOBYs - Cultures for Health. Winter weather driving: How to avoid an accident. How to make a great presentation. Shawn Achor: The happy secret to better work. Daniel Levitin: How to stay calm when you know you'll be stressed. Bell to launch low-cost wireless carrier called Lucky Mobile — offering $20 plans. BCE Inc. is launching a new low-cost wireless carrier called Lucky Mobile. Sugar industry suppressed health effects study 50 years ago – where do we go from here? Scientists make breakthrough in linking sugar to cancer growth. Scientists in Belgium have made a recent discovery that goes a long way to understanding how sugar affects cancer.

In a paper published in the journal Nature Communications, researchers from VIB, a life sciences research institute, and Vrije University in Brussels found that a compound in sugar stimulates aggressive cancer cells and helps them to grow faster. Led by Johan Thevelein, a microbiologist with VIB, this research builds on what scientists already knew about the Warburg effect, where cancer cells rapidly break down sugar for energy and to fuel for further growth. “Cancer cells multiply faster than normal cells and require more energy, that’s why they need the rapid sugar breakdown,” Thevelein tells Global News.