Stress: What is Stress? How to Cope and Ensure Your Well-Being.

(A resource for working adults.)

"Stress is not a state of mind... it's measurable and dangerous, and humans can't seem to find their off-switch."
— Professor. Robert Sapolsky, Neurobiologist and author.

BACKGROUND:
Stress is an evolutionary response mechanism shaped by natural selection, to increase the organism's ability to cope with danger and situations that threaten their survival to elicit action or defense.

However in modern day, stress has established its presence in many aspects of our daily lives, even when we are not facing real physiological situations that require us to be in stress response mode.


WHAT IS STRESS?
Stress is defined as the impact we experience biologically, psychologically, and / or emotionally in response to external events (stressors).

Stress comes in many varying forms and is unique to each individual. A person's perception and interpretation or cognitive appraisal determines the level of stress one undergoes when faced with similar situations.

Sharon Horesh Bergquist: How stress affects your body. Madhumita Murgia: How stress affects your brain. Kelly McGonigal: How to make stress your friend. Daniel Levitin: How to stay calm when you know you'll be stressed. Positive Psychology Center. VIA Character Strengths Survey & Character Profile Reports. The Science of Well-Being by Yale University. Stress. Stress is bumper-to-bumper traffic when you're in a hurry. It's a worrisome illness, an argument with your partner, a job turning sour. It's the need to care for an ailing parent and a pile of unpaid bills. Stress has many faces, and creeps into our lives from many directions. 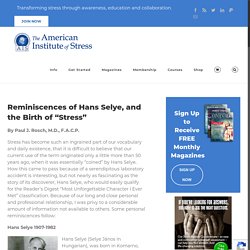 Rosch, M.D., F.A.C.P. Stress has become such an ingrained part of our vocabulary and daily existence, that it is difficult to believe that our current use of the term originated only a little more than 50 years ago, when it was essentially “coined” by Hans Selye. How this came to pass because of a serendipitous laboratory accident is interesting, but not nearly as fascinating as the story of its discoverer, Hans Selye, who would easily qualify for the Reader’s Digest “Most Unforgettable Character I Ever Met” classification. Because of our long and close personal and professional relationship, I was privy to a considerable amount of information not available to others.

Some personal reminiscences follow: Hans Selye 1907-1982 Hans Selye (Selye János in Hungarian), was born in Komarno, Slovakia (at that time Komárom, Hungary) in 1907. Selye spent a significant time of his life in Hungary, in Czechoslovakia, in the USA and in Canada. The upper character represents: DANGER. 7 Life Secrets Of Centenarians. By Lynn Peters Adler, J.D., Next Avenue Contributor There is no one pathway to reaching age 100. 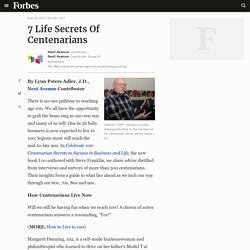 We all have the opportunity to grab the brass ring in our own way and many of us will. One in 26 baby boomers is now expected to live to 100; legions more will reach the mid-to-late 90s. In Celebrate 100: Centenarian Secrets to Success in Business and Life, the new book I co-authored with Steve Franklin, we share advice distilled from interviews and surveys of more than 500 centenarians.

Their insights form a guide to what lies ahead as we inch our way through our 60s, 70s, 80s and 90s. How Centenarians Live Now Will we still be having fun when we reach 100? Chill out, be friendly, live longer. The first thing Koji Saito does when I walk through the front door of his home in Sakaemura is laugh - a raucous guffaw that leaves his eyes glistening with moisture. 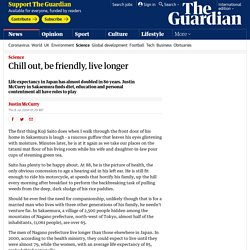 Minutes later, he is at it again as we take our places on the tatami mat floor of his living room while his wife and daughter-in-law pour cups of steaming green tea. Saito has plenty to be happy about. At 88, he is the picture of health, the only obvious concession to age a hearing aid in his left ear. He is still fit enough to ride his motorcycle, at speeds that horrify his family, up the hill every morning after breakfast to perform the backbreaking task of pulling weeds from the deep, dark sludge of his rice paddies.

Should he ever feel the need for companionship, unlikely though that is for a married man who lives with three other generations of his family, he needn't venture far. The men of Nagano prefecture live longer than those elsewhere in Japan. Japanese confirmed as world's oldest living man aged 112, East Asia News. TOKYO (AFP) - Masazo Nonaka from Japan was recognised Tuesday (April 10) as the world's oldest man at the ripe old age of 112, as his family revealed his secret: sweets and hot baths. 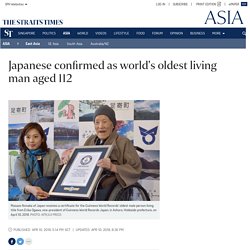 Mr Nonaka, who was born on July 25, 1905 - just months before Albert Einstein published his theory of special relativity - received a certificate from Guinness World Records at home on Japan's northern island of Hokkaido. The supercentenarian, who said he enjoys watching sumo wresting on TV and listening to music, lives with his family, which manages a hot springs inn. “He needs a wheelchair to move but he is in good condition,” said Ms Yuko Nonaka, his granddaughter. “He loves eating any kinds of sweets – Japanese or western style,” she told AFP.

“He reads newspapers everyday and often soaks in the hot springs.” He has seven brothers and one sister who live nearby in the town of Ashoro on Hokkaido. He married Hatsuno in 1931 and the couple had five children, according to Guinness World Records.

Related:  Self Development   -  OE   -  Understanding Teenage Stress   -  Mental Health   -  Tabs   -  Stress Management for Men: A Resource Centre   -  STRESS: How do we manage them?   -  Managing That Stress: For Young Adults   -  What is stress and how to cope effectively with stress? (Guide for teenagers)   -  Stress management for working adults   -  Stress Working Adults face and how to cope with it   -  Bookmarking   -  Kelly McGonigal: How to make stress your friend   -  Thrive Global: Reducing Stress and Burnout, Promoting Health and Well-Being   -  Education   -  Enterprise