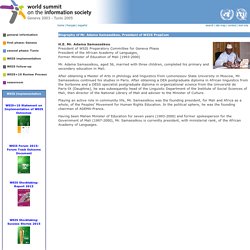 Uganda: Data Strategy and Capacity Building As part of Uganda’s commitment to the Sustainable Development Agenda, the country has made substantial progress toward improved national development data—including the launch of a Development Data Hub supported by Development Initiatives and a review of open data readiness jointly undertaken by the government and the World Bank. 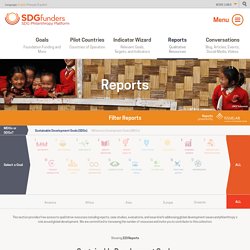 Uganda however, lacks an organized framework for collecting and sharing reliable and comparable data on philanthropy. As such, the newly established Uganda National Philanthropy Forum (UPF) represents a key mechanism for the sector to consolidate its e orts and hone its contributions to national development. The forum was established in October 2015, facilitated by the East Africa Association of Grantmakers (EAAG), in partnership with Independent Development Fund (IDF), Development Network of Indigenous Voluntary Associations (DENIVA) and GoBig Hub. 12th World Education Summit 2018, New Delhi. Leveraging ICTs and Building Information and Knowledge Societies for Achieving the Sustainable Development Goals (SDGs) WSIS Stocktaking In support of the WSIS Implementation and Follow-up, all WSIS Stakeholders are invited to update and submit new entries online. 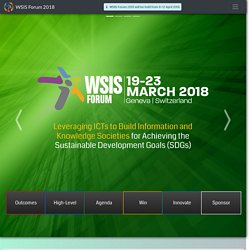 Submitted activities are reflected in the WSIS Stocktaking Report 2018, which were released at the WSIS Forum 2018. Learn more » WSIS Prizes 2018 The WSIS Prizes contest, an integral part of the WSIS stocktaking process, serves as a mechanism to evaluate and recognize individuals, governments, civil society, local, regional and international agencies, research institutions and private sector companies for outstanding success in implementing development-oriented strategies that leverage the power of ICTs. Learn more » WSIS Photo Contest Following the successful first edition, we invite the community to picture how ICTs are playing an enabling role in achieving the Sustainable Development Goals. TopLink. Centre for Educational Research and Innovation - CERI. 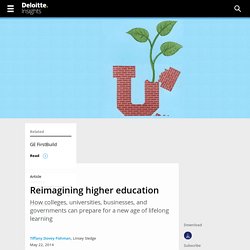 Introduction As Laura arrived at her parents’ house, she found them lighting the grill and setting out chairs for the afternoon’s festivities. Soon, guests would arrive for a party in honor of Laura’s new job, an entry-level position with a large architectural firm. Once, she might have had a graduation party. But it’s 2025, and unlike her parents, Laura hadn’t walked across a stage to mark the end of her formal education. ACTF IFTF FutureSkills report. SR 1382A UPRI future work skills sm. Solved making case collaborative problem solving. 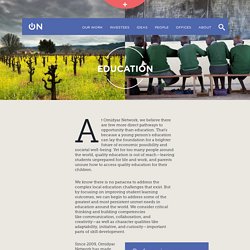 IFTF WFI Voices of Workable Futures 2016. OCW Consortium - OCW Consortium. Conditions required to implement OER practices in the Higher Education of Latin America - OCW Consortium. Abstract The creation of the OCW by the MIT in 2001 can be considered a milestone in the recent history of the OER. 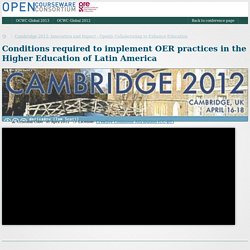 Since then an increasing number of technologies, repositories and tools that support the creation, reutilization and distribution of open resources have been created on the Internet. However the expansion of major institutionalization initiatives such as the OpenCourseWare Consortium (OCWC) in Europe or OCW Universia in Latin America do not seem to evolve with the same level of enthusiasm and visibility.

The adoption of OER principles (philosophy) operates according to a multiplicity of contextual factors that varies depending on each Higher Education institution. For the purpose of this study, the adoption of strategies and channels that embraced the principles of openness and reusability within the context of educational institutions is considered as a key innovation. iNACOL Blended Learning The Evolution of Online And Face to Face Education from 2008 2015. A roadmap for implementation. 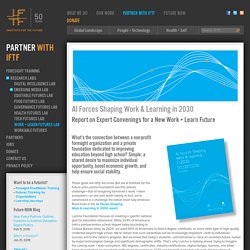 Simple: a shared desire to maximize individual opportunity, boost economic growth, and help ensure social stability. Those goals are lofty, we know. But we at Institute for the Future and Lumina Foundation see this shared challenge—that of imagining tomorrow’s work + learn ecosystem—as one well worth taking. In fact, we’re convinced it is a challenge the nation must fully embrace. Read more in the AI Forces ShapingWork & Learning in 2030 report. Various thoughts and papers in french and english. Human Internet Map. SR1940 IFTFforDellTechnologies Human Machine 070717 readerhigh res. SR 1236 Future Knowledge Ecosystems. World Internet Project. Acepto las Condiciones: Identidad y Huella Digital. Extreme Learners. Fundación Ceibal - Personalized precision education and intimate data analytics. Ben Williamson The word ‘precision’ has become a synonym for the application of data to the analysis and treatment of a wide range of phenomena. 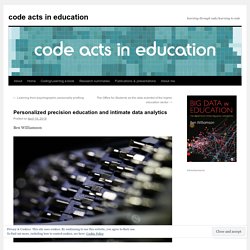 ‘Precision medicine’ describes the use of detailed patient information to individualize treatment and prevention based on genes, environment and lifestyle, while ‘precision agriculture’ has become an entire field of R&D focused on ‘engineering technology, sensor systems, computational techniques, positioning systems and control systems for site-specific application’ in the farming sector. Generation AI: What happens when your child's friend is an AI toy that talks back? ‘My Friend Cayla’ is an internet-connected doll that uses voice recognition technology to chat and interact with children in real time. 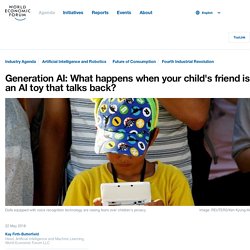 Cayla’s conversations are recorded and transmitted online to a voice analysis company. This raised concerns that hackers might spy on children or communicate directly with them as they play with the doll. There are also concerns about how kids’ voice data is used. In 2017 German regulators urged parents to destroy the doll, classifying it as an “illegal espionage apparatus”. How AI could transform the way we measure kids' intelligence. There is a saying in education that you treasure what you measure. Going by the standardized tests that dominate schools in many countries around the world, we’re teaching children that we value only a very narrow definition of intelligence—the ability to solve word problems about train times, or identify the purpose of a World War I treaty on a multiple-choice test. The truth is human intelligence is vast and complex.

4 New Human Rights for When Our Brains Are Hooked Up to Computers. The human-machine mind meld is just around the corner if you believe the buzz coming out of Silicon Valley these days. 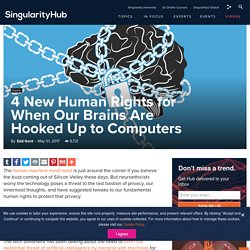 But neuroethicists worry the technology poses a threat to the last bastion of privacy, our innermost thoughts, and have suggested tweaks to our fundamental human rights to protect that privacy. Elon Musk made waves last month when it was revealed that he had launched a new company called Neuralink, aimed at building brain-computer interfaces (BCI) that would allow us to “telepathically” communicate with machines.

The tech billionaire has been talking about the need to avert the existential threat of artificial intelligence by merging with machines for some time, but he’s now put his money where his mouth is and set an ambitious target of having healthy people installing these devices as a consumer product within the decade. Habilidades Educación Siglo XXI.