A Better Note-Taking System for Your Scattered Brain. ‘Four Mind Banks’ can help you process information in a simple, engaging way I recently started a new job, and I’m in that phase where I’m constantly bombarded with new and unfamiliar concepts, from company vocabulary to industry know-how. 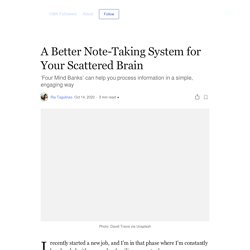 The learning curve is steep. At every meeting, I take furious notes, trying to soak in as much information as possible. For a while, I tried the bullet journal system of note-taking, in which you use icons to label the nature of every single bullet point you write down. While it’s a creative way to mark your thoughts, I found that it becomes difficult to quickly label all the different patterns when you’re faced with heaps of new information. During meetings, I realized that four things were happening in my mind: I was gaining new information.I was coming across things I wanted to gain further clarity or dig deeper on.I was coming up with ideas and insights.I was having strong feelings about certain issues. 🤓 The minutes bank ❓The question bank. Relaxation techniques: Breath control helps quell errant stress response. The term "fight or flight" is also known as the stress response. 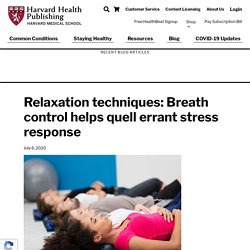 It's what the body does as it prepares to confront or avoid danger. When appropriately invoked, the stress response helps us rise to many challenges. But trouble starts when this response is constantly provoked by less momentous, day-to-day events, such as money woes, traffic jams, job worries, or relationship problems. Health problems are one result. A prime example is high blood pressure, a major risk factor for heart disease. Breath focus is a common feature of several techniques that evoke the relaxation response. Deep breathing benefits Deep breathing also goes by the names of diaphragmatic breathing, abdominal breathing, belly breathing, and paced respiration. For many of us, deep breathing seems unnatural. Shallow breathing limits the diaphragm's range of motion. Deep abdominal breathing encourages full oxygen exchange — that is, the beneficial trade of incoming oxygen for outgoing carbon dioxide.

First steps. How 'linguistic mirroring' can make you more convincing - BBC Worklife. How to Study for Exams [Even If You're Freaking Out at the Last Minute] Matt Walker: Sleep is your superpower. 35 Psychology-Based Learning Strategies For Deeper Learning. 35 Psychology-Based Critical Thinking Strategies by Sara Briggs, opencolleges.edu.au Have you ever considered letting your students listen to hardcore punk while they take their mid-term exam? 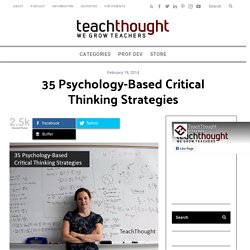 Decided to do away with Power Point presentations during your lectures? Urged your students to memorize more in order to remember more? If the answer is no, you may want to rethink your notions of psychology and its place in the learning environment. Here are 35 critical thinking strategies, straight from the mind of Sigmund Freud. 35 Psychology-Based Critical Thinking Strategies 1. Definition: It is easiest to recall information when you are in a state similar to the one in which you initially learned the material. Application: Urge your students to sit in the same room they studied in when they complete their take-home quiz. 2.

Definition: The tendency to overemphasize internal explanations for the behavior of others, while failing to take into account the power of the situation. 3. - Homepage. Let's talk about Self-Management. Are smartphones the new 'opium of the people'? Image copyright Getty Creative For most of recent human history, by which I mean the last few millennia, social organisation has been rooted in practical faith. 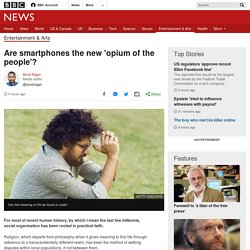 Religion, which departs from philosophy when it gives meaning to this life through reference to a transcendentally different realm, has been the method of settling disputes within local populations, if not between them. Great cities of antiquity were built around sites of communal prayer, such as the church or mosque; market-places, such as the town square or bazaar; and schools, which were often the venue for religious teaching. These venues generated social capital, creating bonds of mutual trust and affection between people who, despite their differences, needed to rub along. Today, to paraphrase Mark Twain, reports of the death of God have been greatly exaggerated. Image copyright EPA Put yourself into the great intellectual flourishing of 8th Century Baghdad, or of Medici Florence.