Respect first - how focusing on respect makes change so much easier. Creating a Company Culture Where Agile Will Thrive. Business Development Culture: Taking Sales Culture Beyond the Sales Team (2018) by Alex Moyle. Organizational Agility: Values, Principles and Traits (The Agility Series) (2016) by Larry Cooper. Building Trust: The Essential Ingredient for High-Performing Teams — Wharton@Work June 2018. Most of the work done in organizations is done by teams, so it makes sense that there are decades of research on what makes them successful. 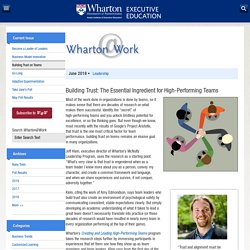 Identify the “secret” of high-performing teams and you unlock limitless potential for excellence, or so the thinking goes. But even though we know, most recently with the results of Google’s Project Aristotle, that trust is the one most critical factor for team performance, building trust on teams remains an elusive goal in many organizations. Jeff Klein, executive director of Wharton’s McNulty Leadership Program, uses the research as a starting point. “What’s very clear is that trust is engendered when as a team leader I know more about you as a person, convey my character, and create a common framework and language, and when we share experiences and survive, if not conquer, adversity together.” One challenge involves teams creating an original piece of theater. Culture: 4 keys to why it matters.

March 27, 2018 – by Carolyn Dewar and Reed Doucette What separates the highest performing organizations from the rest? 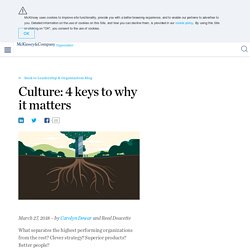 Clever strategy? Superior products? Cover Story: Change Is Hard. Here's How To Build A Culture That Delivers Your Digital Transformation. The Humanization of the Corporation. How should companies change their mindset and rewrite their strategy agenda to focus on a broader purpose? 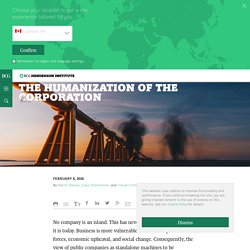 We suggest eight steps: Define your purpose, the higher social goal of your company. This should be at the intersection of a need in the world and a distinctive aspiration and ability to deliver it. Crucially, companies then need to take actions consistent with their stated purpose, even when they might appear to impair short-term results. Consider CVS Health, the first US retail pharmacy chain to stop selling tobacco products. Adopt metrics that assess the well-being of the broader system. Put more emphasis on the future. Maintaining a Culture of Builders and Innovators at Amazon. A Conversation With Beth Galetti Amazon's Senior Vice President of Worldwide Human Resources Gallup Managing Director Larry Emond: In a recent conversation we had, you mentioned that at the top of your list of priorities was maintaining a consistent culture across all of Amazon, while still maintaining a startup mentality in each of the businesses. 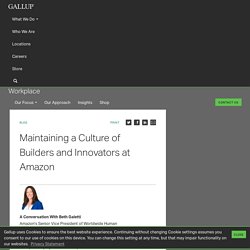 Please tell me more about how you go about doing that. Galetti: Culture is very important to us at Amazon. Dismal Employee Engagement Is a Sign of Global Mismanagement. According to our recent State of the Global Workplace report, 85% of employees are not engaged or actively disengaged at work. 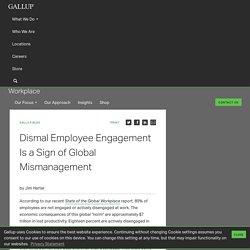 The economic consequences of this global "norm" are approximately $7 trillion in lost productivity. Eighteen percent are actively disengaged in their work and workplace, while 67% are "not engaged. " This latter group makes up the majority of the workforce -- they are not your worst performers, but they are indifferent to your organization. They give you their time, but not their best effort nor their best ideas.

They likely come to work wanting to make a difference --- but nobody has ever asked them to use their strengths to make the organization better. In a nutshell, this global engagement pattern provides evidence that how performance is managed, and specifically how people are being developed, is misfiring. While this may sound like a tall order, the roadmap to better management is clear. Audit your current performance management system. The Co-Creation Imperative: How To Make Organizational Change Collaborative. The Way We Work – Capgemini Worldwide. Over the past year I have received some surprising feedback upon telling my predecessors that I am the Lead of the Millennial Innovation Council Newsletter. 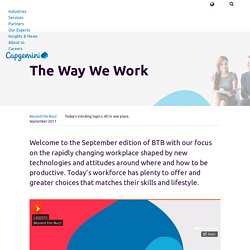 Just the other day I was working on our newsletter and a few of my colleagues said “Ha, that’s hilarious, I bet you don’t even know who Prince was,” and “You probably still use your parent’s credit card.” I proceeded to ask what year they were born in, which they said was 1982. According to Wikipedia, “There are no precise dates for when the generation starts and ends, but most researchers and commentators use birth years ranging from the early 1980s to around 2000.” 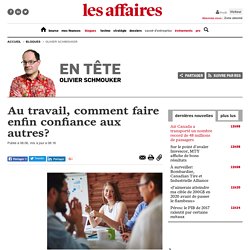