What If the Iraq War Had Never Happened and America's Military Stayed Home?: Page 2 of 2. Parting Thoughts: Great powers have the luxury of making costly mistakes. 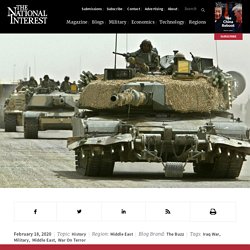 The many lives and endless treasure that the United States expended in Vietnam did little to affect the course of the Cold War, as the Soviet economy and Soviet society collapsed under their own weight. During the imperial era, Britain, France, and Russia regularly made terrible strategic errors that seemed catastrophic at the time, but had little impact on the overall strategic picture. The enduring cost of the Iraq invasion comes in the form of the thousands of dead Americans, and hundreds of thousands of dead Iraqis. Technology shortfalls driven by the war will smooth out over time; the war didn’t cause the U.S. to “miss out” on any critical technological opportunities, instead simply delaying them.

Why most narrative history is wrong. It’s almost universally accepted that learning the history of something — the true story of how it came about — is one way to understand it. 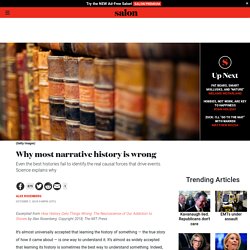 It’s almost as widely accepted that learning its history is sometimes the best way to understand something. Indeed, in many cases, it’s supposed that the only way to understand some things is by learning their history. Historians fight back as TV raids their research treasures for its shows. The ever-expanding number of history programmes on television ought to mean boom time for historians. 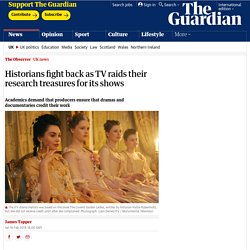 Yet a growing number of authors and academics believe they are being unfairly cut out of the process. The Society of Authors says it has seen a rise in complaints from members about their work being used in TV shows without credit or payment. The complaints range from being left out of a programme’s credits after handing over weeks of research to cases where entire books have been used as the basis for shows, according to Nicola Solomon, chief executive of the society. “It is a perennial problem, but there is a rise in complaints,” she told the Observer. “Our members really feel they should be asked and remunerated for their time.” Why the past is disputed and academic historians (don’t) matter.

Recent years have witnessed a proliferation of disputes over how the past should be used, with alt-right demonstrations over the planned removal of Confederate monuments in Charlottesville/VA, the Hindu nationalist rewriting of Indian history, or the refashioning of the rural past in post-coup Thailand among those most widely reported. 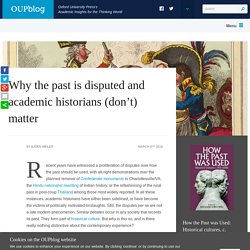 In all these instances, academic historians have either been sidelined, or have become the victims of politically motivated onslaughts. Still, the disputes per se are not a late modern phenomenon. Similar debates occur in any society that records its past. They form part of historical culture. Scaling the tower. This article is a preview from the Winter 2018 edition of New Humanist The Square and the Tower: Hierarchies and the Struggle for Global Power (Penguin) by Niall Ferguson History seems simple to people outside the discipline: it is about the past. 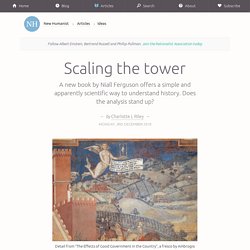 Historians go to archives to find out information; they reach back into the times before ours and pull out facts, like a fisherman sitting beside a lake baits their hook and waits. These facts add up to the story of what happened. But for many historians, this isn’t how it feels. Free Speech and the Study of History - Professor Timothy Garton Ash. History classes are our best hope for teaching Americans to question fake news and Donald Trump — Quartz. Socks—yes, socks—are an incredibly popular holiday gift. 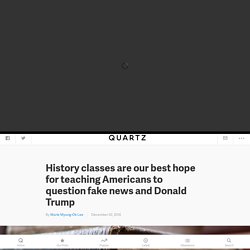 According to research firm NPD Group, they are the item of clothing given the most to men or women in the US for Hanukah or Christmas. Admittedly, socks might not stir our passions the way expensive jewelry or electronics do. But maybe that’s because when we give them, we prioritize the wrong qualities. We think of them as a necessity rather than a luxury. 'Trump will be president' Meet the prof with 30 year record of predicting winners - Home. Monday September 26, 2016. 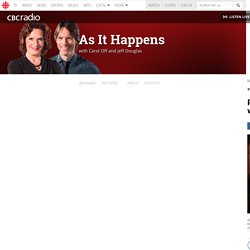 History Tells Us What Will Happen Next With Brexit And Trump. Note: this essay contains a lot of links out, which are underlined. 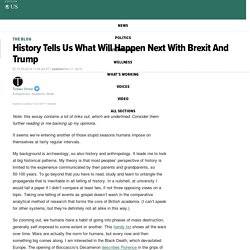 Consider them further reading or me backing up my opinions. It seems we’re entering another of those stupid seasons humans impose on themselves at fairly regular intervals. My background is archaeology, so also history and anthropology. It leads me to look at big historical patterns. My theory is that most peoples’ perspective of history is limited to the experience communicated by their parents and grandparents, so 50-100 years. So zooming out, we humans have a habit of going into phases of mass destruction, generally self-imposed to some extent or another.

[Trump is] a charismatic narcissist who feeds on the crowd to become ever stronger, creating a cult around himself. But a defining feature of humans is their resilience. Letter from Africa: Why Nigerians need to learn their history. Image copyright AFP In our series of letters from African journalists, Sola Odunfa looks at why it is a good idea for Nigeria to reintroduce history as a school subject - a move recently backed by the country's senate. 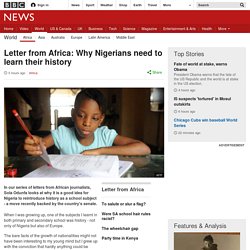 The Inevitable, Intergalactic Awkwardness of Time Capsules. The Golden Record is affixed to the Voyager 1 spacecraft, 29 July 1979. 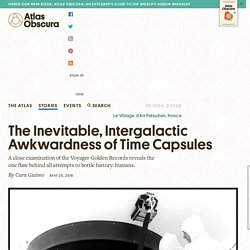 (Photo: NASA/Public Domain) The year is… let's say it's 42026. You're cruising along your regular orbit, minding your own business, when suddenly, your craft's detection system registers a mysterious interloper. Are There TWO Nikola Teslas? World History Lessons. Lesson: Nat. of Sci. mini-lesson: Checks Lab.

Before Doing this lab, consider doing the NEW High-Tech Version: The E-Mail Lab. (Details below under EXTENSIONS AND VARIATIONS. TEACHER PREPARATIONS: 1. Because this lesson provides an excellent opportunity to understand important elements of the Nature of Science , be sure to read our General Background Information, with our Rationale and our Approach, and tips for Presenting the lessons for maximum effect and Dispelling some of the popular myths about science. 2. In any of the discussions expected with the class, select a few key items (important concepts) that lend themselves to interpretation, and introduce class to the Think-Pair-Share (TPS) routine dealing with those items. 3. 4. 5. 6. 7.

What the Spanish civil war can reveal about Syria. As the battle for Aleppo continues unabated, this intense episode in the Syrian civil war harkens back to a vicious battle for another Mediterranean city, Barcelona, during the Spanish civil war. July 2016 marked the 80-year anniversary of the outbreak of the conflict in Spain, lasting from 1936 to 1939. In July 1936, General Francisco Franco led a rebellion among the Spanish military and his allies, collectively referred to as the Nationalists, against the recently elected left leaning Republican Government. The Republican government rallied its military forces to its defence, in addition to anarchist and communist militia, and a civil war ensued.

I refrain from invoking the cliched phrase, "history repeats itself". Rather, this piece, part of a series of articles comparing the Spanish past and Syrian present, will elucidate similar dynamics in civil wars, and illustrate how they end or why they continue to endure. World War One: 10 interpretations of who started WW1. Image copyright Alamy As nations gear up to mark 100 years since the start of World War One, academic argument still rages over which country was to blame for the conflict. Education Secretary for England Michael Gove's recent criticism of how the causes and consequences of the war are taught in schools has only stoked the debate further. Here 10 leading historians give their opinion. Sir Max Hastings - military historian Germany No one nation deserves all responsibility for the outbreak of war, but Germany seems to me to deserve most.

It alone had power to halt the descent to disaster at any time in July 1914 by withdrawing its "blank cheque" which offered support to Austria for its invasion of Serbia. Which Rock Star Will Historians of the Future Remember? Classifying anyone as the “most successful” at anything tends to reflect more on the source than the subject. So keep that in mind when I make the following statement: John Philip Sousa is the most successful American musician of all time. Marching music is a maddeningly durable genre, recognizable to pretty much everyone who has lived in the United States for any period. It works as a sonic shorthand for any filmmaker hoping to evoke the late 19th century and serves as the auditory backdrop for national holidays, the circus and college football.

It’s not “popular” music, but it’s entrenched within the popular experience. It will be no less fashionable tomorrow than it is today. And this entire musical idiom is now encapsulated in one person: John Philip Sousa. In new Egyptian textbooks, ‘it’s like the revolution didn’t happen’ CAIRO — The omission on Page 5 is glaring. In a fifth-grade government textbook, a name has been purged from a list of Egyptian Nobel laureates: Mohamed ElBaradei, who was awarded the 2005 Nobel Peace Prize along with the International Atomic Energy Agency, which he led. Three years ago, the former diplomat stepped down as the country’s vice president to protest a violent crackdown by security forces on Islamists. The Problem With History Classes.

What if historians started taking the ‘what if’ seri... What if Adolf Hitler’s paintings had been acclaimed, rather than met with faint praise, and he had gone into art instead of politics? Have you ever wondered whether John F Kennedy would have such a shining reputation if he had survived his assassination and been elected to a second term? The Ethics of Killing Baby Hitler.

The New York Times Magazine conducted a poll that asked whether its readers could kill an infant Adolf Hitler. On Friday afternoon, the publication tweeted its results to the world. The Power of Memory in the Civil-Rights Movement. ASPEN, Colo. —What makes John Lewis such an important link to the crucial period of the civil-rights period isn’t just that he was there. It’s that he can conjure dates, faces, and details from those experiences with such impressive command. What Japanese history lessons leave out. Japanese people often fail to understand why neighbouring countries harbour a grudge over events that happened in the 1930s and 40s. The reason, in many cases, is that they barely learned any 20th Century history. I myself only got a full picture when I left Japan and went to school in Australia. The Historical Imagination: Collingwood in the Classroom. CANADIAN SOCIAL STUDIES VOLUME 38 NUMBER 2, WINTER 2004 www.quasar.ualberta.ca/css Lynn Speer Lemisko.

Is Erdogan rewriting history? Turkish President Recep Tayyip Erdogan has recently come under fire for statements he made on the role of Muslims in history that have been widely construed as blatant - even clumsy - revisionism. On November 15, at a conference with Latin American politicians and scholars, Erdogan claimed that "Muslim seafarers" had discovered the Americas three centuries before Italian explorer Christopher Columbus had done. The New History Wars. The Counterfactual History Review. Timothy Ryback’s recent opinion piece in The New York Times, “History Without Hitler?” Raises a question that has been posed many times before, but he approaches it from a new angle by asking what it might tell us about the future. Bello: Memory is not history. Declinism: is the world actually getting worse?