Nikolay Bakharev's Amateurs and Lovers. Photographer Nikolay Bakharev was an orphan (his parents died when he was four) who worked as a mechanic until he developed his profession as a self-trained photographer. 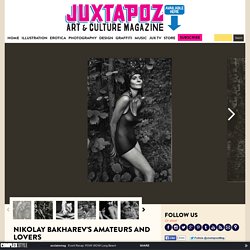 He grew up in East Russia near Mongolia, and still lives in Siberia. His work was featured in the "Ostalgia" exhibition in the summer of 2011 at the New Museum in New York which gathered art from Eastern European countries with a curious nostalgia for a painful past. As a critic in the Economist said: "All of this art is political, by the simple act of its creation. " Bakharev's models are the people among whom he lives and his depictions can be divided into two distinct bodies of work: private and public. The private images are generally women or couples photographed in their homes, and the public are couples and larger groups in swimsuits photographed in the woods. Bakharev's exhibition The People of Town N is on display at Julie Saul Gallery in NYC through August 21st, 2015. 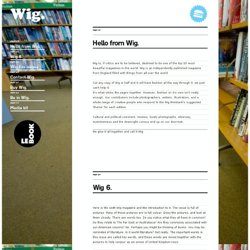 Wig is an independently published magazine from England filled with things from all over the world. Cut any copy of Wig in half and it will have fashion all the way through it: we just can't help it. It's what sticks the pages together. However, fashion on it's own isn't really enough. Our contributors include photographers, writers, illustrators, and a whole range of creative people who respond to the Wig thinktank's suggested 'theme' for each edition. Cultural and political comment, reviews, lovely photographs, whimsey, inventiveness and the downright curious end up on our doormat. We glue it all together and call it Wig. Here is the sixth Wig magazine and the introduction to it. Key words to look out for are London, pimp, Orkney, skinhead, trench and Boeing.

THE EDITORS, England The Fifth Issue: my fellow Americans or How I Stopped Worrying and Learned to Love the Bomb. Now rare. Photographic Review: Home. Show Time Spanish. Show Time Spanish was introduced in October 2008 as a follow-on from lesson 80 of Coffee Break Spanish. 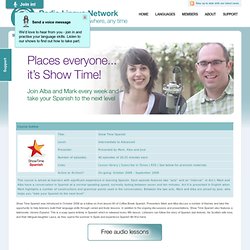 Presenters Mark and Alba discuss a number of themes and take the opportunity to help listeners build their language skills through varied and lively lessons. In addition to the ongoing discussions and presentations, Show Time Spanish also features a telenovela, Verano Español. This is a soap opera entirely in Spanish which is released every fifth lesson. Listeners can follow the story of Spanish dad Antonio, his Scottish wife Iona, and their bilingual daughter Laura, as they spend the summer in Spain and experience Spanish life first-hand.