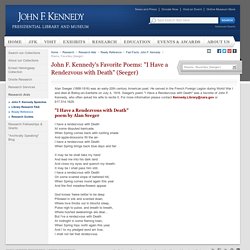 It may be he shall take my hand And lead me into his dark land And close my eyes and quench my breath- It may be I shall pass him still. RWE.org - Complete Works of RWE. Horace - Otium. In this lyrical ode echoing many traditional Epicurean themes, Horace tells us that “otium” or peace is to be valued above wealth or power: Otium divos rogat in patenti prensus Aegaeo, simul atra nubes condidit lunam neque certa fulgent sidera nautis; Peace the sailor prays, caught in a storm on the open Aegean, when dark-clad clouds have hid the moon and the stars shine no longer certain; otium bello furiosa Thrace, otium Medi pharetra decori, Grosphe, non gemmis neque purpura ve- nale neque auro. 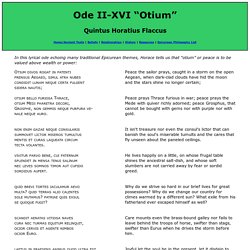 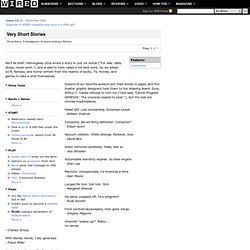 Page 1 of 1 We'll be brief: Hemingway once wrote a story in just six words ("For sale: baby shoes, never worn. ") and is said to have called it his best work. So we asked sci-fi, fantasy, and horror writers from the realms of books, TV, movies, and games to take a shot themselves. Dozens of our favorite auteurs put their words to paper, and five master graphic designers took them to the drawing board. Sure, Arthur C. Failed SAT. Computer, did we bring batteries? Vacuum collision. Gown removed carelessly. Automobile warranty expires. Machine. Longed for him. Daily Quote Archive Categories. JKOnline in: The official repository of the authentic teachings of J. 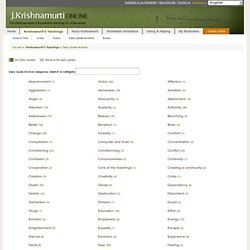 Krishnamurti You are in: Krishnamurti's Teachings » Daily Quote Archive. Academy of American Poets. Poet Seers. The Elephant is Slow to Mate. I Am Much Too Alone in This World, Yet Not Alone. The Works of John Donne. John Donne (1572-1631) John Donne: Poems. American Teilhard Association / teilhards-quotes. “Seeing. 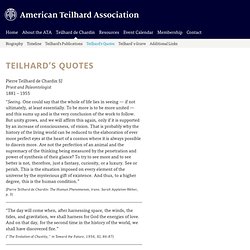 One could say that the whole of life lies in seeing — if not ultimately, at least essentially. To be more is to be more united — and this sums up and is the very conclusion of the work to follow. But unity grows, and we will affirm this again, only if it is supported by an increase of consciousness, of vision. That is probably why the history of the living world can be reduced to the elaboration of ever more perfect eyes at the heart of a cosmos where it is always possible to discern more. Are not the perfection of an animal and the supremacy of the thinking being measured by the penetration and power of synthesis of their glance? "There are really only two ways, it seems to me, in which we can think about our existence here on Earth. Manuscrits flaubert. Édition intégrale du manuscrit de Madame Bovary. 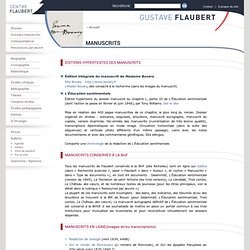 Kathleen Joan "Kathy" Reichs is a native of Chicago and works as a forensic anthropologist, an academic, and bestselling writer of mystery novels. 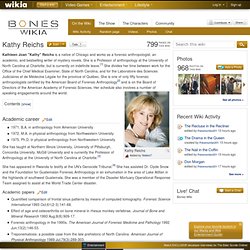 She is a Professor of anthropology at the University of North Carolina at Charlotte, but is currently on indefinite leave.[1] She divides her time between work for the Office of the Chief Medical Examiner, State of North Carolina, and for the Laboratoire des Sciences Judiciaires et de Médecine Légale for the province of Québec. She is one of only fifty forensic anthropologists certified by the American Board of Forensic Anthropology[2] and is on the Board of Directors of the American Academy of Forensic Sciences. 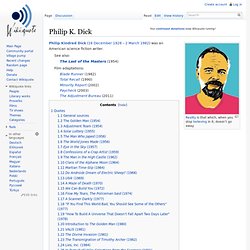 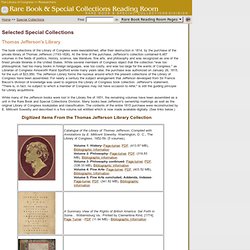 At the time of the purchase, Jefferson's collection contained 6,487 volumes in the fields of politics, history, science, law literature, fine arts, and philosophy and was recognized as one of the finest private libraries in the United States. While several members of Congress object that the collection "was too philosophical, had too many books in foreign languages, was too costly, and was too large for the wants of Congress," as Librarian of Congress Ainsworth Rand Spofford wrote many years later, the purchase was authorized on January 26, 1815, for the sum of $23,950.

The Jefferson Library forms the nucleus around which the present collections of the Library of Congress have been assembled. Digitized items From the Thomas Jefferson Library Collection. Beatrice Santorini, Linguistic humor. Samuel Beckett Resources and Links. Works of Humanist Erasmus  Ongoing exhibition, opened April 11, 2008. 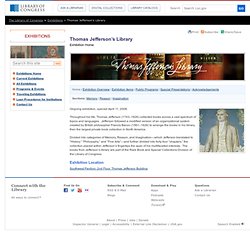 Throughout his life, Thomas Jefferson (1743–1826) collected books across a vast spectrum of topics and languages. Jefferson followed a modified version of an organizational system created by British philosopher Francis Bacon (1561–1626) to arrange the books in his library, then the largest private book collection in North America. Divided into categories of Memory, Reason, and Imagination—which Jefferson translated to “History,” “Philosophy,” and “Fine Arts”—and further divided into forty-four “chapters,” the collection placed within Jefferson’s fingertips the span of his multifaceted interests. Thomas Gray Archive : Home. Encyclopedia of Philosophy. Greek and Latin Texts. Luminarium: Anthology of English Literature. Open Source Shakespeare: search Shakespeare's works, read the texts.

Oxford Companion to Shakespeare. Shakespeare Navigators. No Fear Shakespeare: Shakespeare's plays plus a modern translation you can understand. Absalom and Achitophel by John Dryden. Thomas Moore.