5 Fun Ways to Learn a New Language. For many of us, the start of the new year is the time we often dust off our language dictionaries and workbooks and resolve to learn a new language. 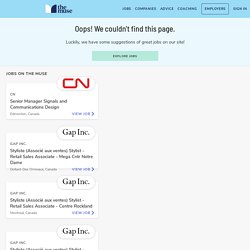 We conjure up dreams of communicating seamlessly with locals during our next trip and impressing our friends with newfound skills. But most of the time, as we get caught up in work and life, our plans get shelved along with our books. But the truth is, learning a language shouldn’t be a chore. After all, reading, listening, and chatting with others are all great, enjoyable activities, and learning should be, too. And it also can be easy—if you approach it in a fresh way. So put down the books, and try one of these other ways of learning a new language.

» How to Learn A Language in 90 Days. ‘If you talk to a man in a language he understands, that goes to his head. 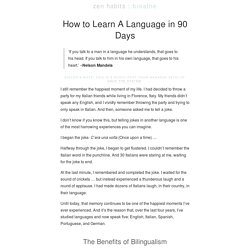 If you talk to him in his own language, that goes to his heart.’ ~Nelson Mandela. NorwegianLanguage.info. Guide linguistique norvégien. Le norvégien est la langue parlée en Norvège. 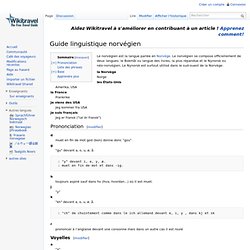 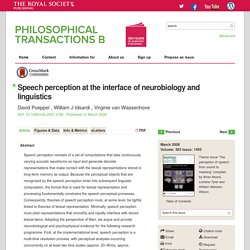 Because the perceptual objects that are recognized by the speech perception enter into subsequent linguistic computation, the format that is used for lexical representation and processing fundamentally constrains the speech perceptual processes. Schwa, syllables and words in different guises – Part 1. I still remember learning, in my early days at school, that there are five vowels in English: a, e, i, o and u. 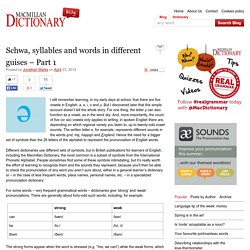 But I discovered later that this simple account doesn’t tell the whole story. For one thing, the letter y can also function as a vowel, as in the word sky. Elder Care. Ple. Slanguage. Idiomatica. संस्कृतम् Phonetics. Sounds. 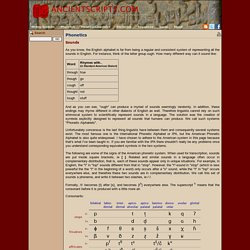 Memory. Typography - Free font information, TrueType, OpenType, ClearType. Iranian.com: Fatima Farideh Nejat. The Taarof Project. The Taarof Project The concept of Persian taarof can be described in three important components relating to speech act theory: Its social meaning, the intention of the speaker, and the effect of the act Updated July 13, 2005 iranian.com A Research Proposal [download full text document]: "The Concept of Persian Taarof: A Sociolinguistic Knowledge of the Speech Act Measured by The Persian Taarof Comprehension Test", Fall 2004. 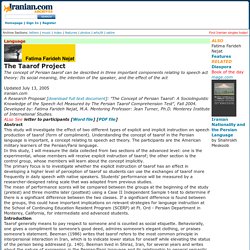 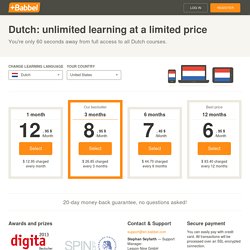 Mnemonic Dictionary - Fun and easy way to build your vocabulary! History, Travel, Arts, Science, People, Places. The rules of sarcasm. Sarcasm is so ubiquitous these days, it almost goes unnoticed. 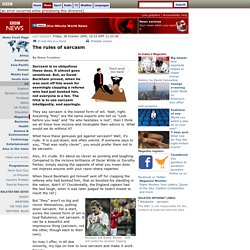 But, as David Beckham proved, when he was sent off this week for seemingly clapping a referee who had just booked him, not everyone is a fan. The trick is to use sarcasm intelligently, and sparingly. They say sarcasm is the lowest form of wit. Yeah, right. Assuming "they" are the same experts who tell us "Look before you leap" and "He who hesitates is lost", then I think we all know how incisive and invaluable their advice is. What have these geniuses got against sarcasm? International Business: Sarcasm is never lost in translation: yeah, right!

Some cultures understand satire and sarcasm better than others. 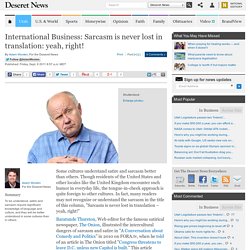 Though residents of the United States and other locales like the United Kingdom encounter such humor in everyday life, the tongue-in-cheek approach is quite foreign to other cultures. In fact, many readers may not recognize or understand the sarcasm in the title of this column, "Sarcasm is never lost in translation – yeah, right! " Baratunde Thurston, Web editor for the famous satirical newspaper, The Onion, illustrated the intercultural dangers of sarcasm and satire in "A Conversation about Comedy and Politics" in 2010 on FORA.tv, when he told of an article in The Onion titled "Congress threatens to leave D.C. unless new Capitol is built. " Understanding sarcasm is a complex business - life - 23 May 2005. Different parts of the brain must work together to understand sarcasm, new research suggests.

The prefrontal cortex - a small area in the front of the brain - seems to play the biggest role and may integrate the literal meaning of a phrase with the speaker's emotional intent. The findings on the anatomy of sarcasm could have implications for understanding personality changes in people with brain injury or disease. Phonological awareness vs. Phonemic awareness.pdf. Lingua Franca.

New Learning. Language Expresses. Mother Tongues. Why is Sanskrit so controversial? India's new government focus on Sanskrit has sparked a fresh debate over the role language plays in the lives of the country's religious and linguistic minorities. LEARNING. Language Etymology. How I Learned a Language in 90 Days. Learn a language fast and efficiently – Fluent Forever.

According to their form theories can be classified along a continuum with ‘deductive’ on one end and ‘inductive’ on the other. Theories following the deductive approach contain concepts and constructs that are assumed to be true without proof. Learn 40 Languages for Free with Free Audio Lessons. Get FREE Audio Books from Audible.com and Audiobooks.com How to learn languages for free? This collection features lessons in 48 languages, including Spanish, French, English, Mandarin, Italian, Russian and more. Download audio lessons to your computer or mp3 player and you're good to go. Amharic. Start Speaking a Language in 10 days. About - The Rosetta Project. The Rosetta Project is The Long Now Foundation's first exploration into very long-term archiving.

Is there a way to define what is "fluency" in a foreign language ? Where can we stop in the first stage of learning ? This page discusses these problems. For the purpose of the learner, we can break foreign language fluency in 4 components : 5 examples of how the languages we speak can affect the way we think. Keith Chen (TED Talk: Could your language affect your ability to save money?) Learn Spanish, French, German, Portuguese, Italian and English for free. Word Generation. Foreign Language Expertise - The Website of Alexander Arguelles. What Mimicking One's Language Style May Mean About the Relationship.

Japanese Grammar Guide. This guide was created as a resource for those who want to learn Japanese grammar in a rational, intuitive way that makes sense in Japanese. The explanations are focused on how to make sense of the grammar not from English but from a Japanese point of view. You don't know a language, you live it. You don't learn a language, you get used to it. The Japanese Slang Jiko.

Related:  Language   -  A Radical View of Chinese Characters   -  Languages   -  Wordsworth   -  SANSKRIT   -  Linguist   -  Grammar   -  Mnemonic Dictionary - Fun and easy way to build your vocabulary!   -  How I Learned a Language in 90 Days   -  I Learned to Speak Four Languages in a Few Years: Here's How   -  Learn 40 Languages for Free with Free Audio Lessons   -  Language Learning with Rosetta Stone   -  5 examples of how the languages we speak can affect the way we think   -  Learn Spanish, French, German, Portuguese, Italian and English for free   -  What Mimicking One's Language Style May Mean About the Relationship   -  Collecting example sentences   -  Free Japanese study materials, worksheet, PDF, audio file, list. Japanese Language School in Tokyo   -  Japanese Grammar Guide   -  You don't know a language, you live it. You don't learn a language, you get used to it.   -  Education   -  Enterprise