I Learned to Speak Four Languages in a Few Years: Here's How 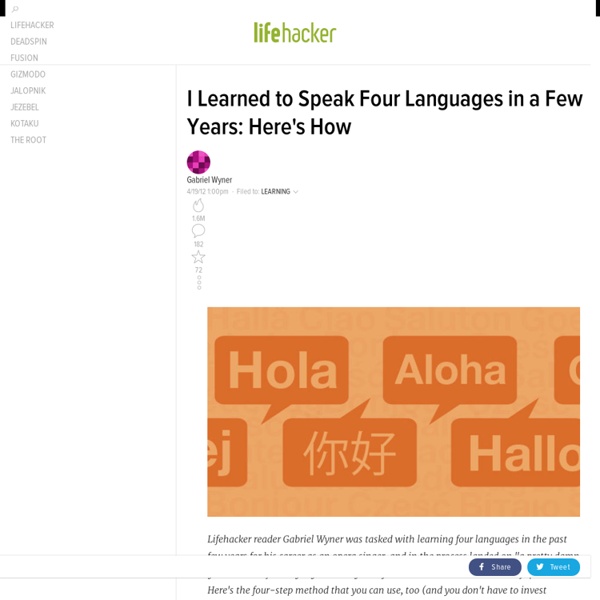 Once you master one foreign language (in my case my native language is English, but I'm fluent in German as well), try to learn another foreign language through that first one. For example, I'm currently studying at a German university, and I'm taking a beginner Russian course. Because I'm at a German university, the course is obviously taught in German, and it's a really interesting and helpful experience. You've already gotten pretty good at the foreign language in itself by this point, but learning another language from that first foreign language really helps to polish off your language skills. I'm sure it's also a good workout for your brain trying to deal with 2 (or more) foreign languages simultaneously. Also I can't help but reiterate some of the other advice given here in the comments: nothing can replace extended immersion in a country in which the target language is spoken.

Speak from day 1 You don’t have to be “gifted” to learn a new language, but you do have to be smart about how you learn it. Hi! When you’ve watched the video above and are ready to join the thousands of other language hackers who are using the Fluent in 3 Months PREMIUM package as an unconventional approach to learn languages quickly, click the button below. If you’ve got any questions after watching the video, check out the “Frequently Asked Questions” page. I’ve tried to answer every possible question you might have on that page, including ones I get a lot such as: “What if I’m not good at learning languages?” Basic French – Learn French Online Course Description French is spoken by millions of people in many countries around the world and is a very popular second language to learn. ALISON's free online course is a series of engaging video lessons for beginners that introduces the learner to various aspects of the French language including basic French vocabulary and grammar. By studying this French course you will quickly pick up conversational French that will help you deal with everyday situations you may find yourself in when you visit a French speaking country. ALISON's online course will help you learn French online and will be of great interest to all learners who want to pick up basic French language skills. To qualify for your official ALISON Diploma, Certificate or PDF you must study and complete all modules and score 80% or more in each of the course assessments.

Graduate Programs Where cultural understanding meets true fluency. Middlebury has led the world in full-immersion language studies since the launch of its first summer program in 1915. Today, graduates of the degree programs at the Middlebury Language Schools and Schools Abroad, the Bread Loaf School of English, and the Monterey Institute of International Studies can be found working in education, government, journalism, international business, and the non-profit sector. 20 Common Grammar Mistakes I’ve edited a monthly magazine for more than six years, and it’s a job that’s come with more frustration than reward. If there’s one thing I am grateful for — and it sure isn’t the pay — it’s that my work has allowed endless time to hone my craft to Louis Skolnick levels of grammar geekery. As someone who slings red ink for a living, let me tell you: grammar is an ultra-micro component in the larger picture; it lies somewhere in the final steps of the editing trail; and as such it’s an overrated quasi-irrelevancy in the creative process, perpetuated into importance primarily by bitter nerds who accumulate tweed jackets and crippling inferiority complexes. But experience has also taught me that readers, for better or worse, will approach your work with a jaundiced eye and an itch to judge. While your grammar shouldn’t be a reflection of your creative powers or writing abilities, let’s face it — it usually is.

Learn Second Language with Pen Pal MyHappyPlanet and like websites for learning a second language have broadened the possibilities for effective acquisition. Learning a second language can be a frustrating experience, but one of the most difficult aspects is not having anybody with whom you can practice. One of the most common reasons given that someone has forgotten a language, in fact, is that they didn't use it enough. Conversing with others and even perhaps having a language learning partner is crucial to achieving fluency. For many, the concept of use it or lose it applies without a doubt. The internet has revolutionized second language acquisition more than some people are yet aware.

Free Mastering French Grammar and Vocabulary Online Course Course Description For learners who have studied our first two French courses, this third course will further increase your understanding of the French language. You will build on your existing knowledge of French vocabulary and master important areas of grammar that will greatly improve your comprehension of the French language and your ability to communicate effectively with native French speakers. Esperanto video and how useful the language can be: Interview with a Buddhist monk and tour of monastery Fun video to share with you today… in Esperanto! Click “CC” to activate subtitles in English (as well as original Esperanto), or if you’re in China (and not using VPN software to circumnavigate the “Great Firewall of China” as I’m clearly doing to be able to use Youtube) then check it out on Youku. I made it to Xi’an, and after checking out some typical sites, thanks to a contact in the Esperanto community I got to meet Miaohui at his monastery, which is a bit outside of Xi’an along the Silk Road (China’s “Route 66″). He’s a Buddhist monk who also happens to be an active Esperanto speaker. Since I like to use my languages to share cultural insights, it only seemed right to make a video with him about the monastery and Buddhism in general. First he gives me a tour of the most important halls and statues, with appropriate historic context, and then I sit down with him to ask him some questions.

40+ Tips for Grammar and Punctuation After all these years you finally have the courage and opportunity to write the email announcing that you and you alone have single handedly saved the company from utter disaster. You’re excited, you type it, you spell check it, and you hit send.Everything is great except that your gold star memo has dangling modifiers, double negatives and run-on sentences colliding with each other. Now I am no grammar whiz but I know a good resource when I see it. Purdue University maintains an purdue.edu/" target="_blank">online writing lab and I spent some time digging through it. Links to websites about language exchange Links to websites where you can find penpals and language exchange partners who can help you to learn their languages, and who you can help to learn your language. SharedTalk - language exchange community Polyglot Club - find a language exchange partner Tandem Server Bochum - language learning exchange partnerships italki - online language exchange and resources for language learning Meetup.com - a way to meet people interested in learning languages, etc.

GOTHAM GAZETTE: The Citizen Language Map “You can walk an entire block in Times Square and not hear anybody speaking English,” said xenophobic Atlanta Braves pitcher John Rocker in an infamous article in Sports Illustrated. “Asians and Koreans and Vietnamese and Indians and Russians and Spanish people and everything up there.” Though he meant it as an insult, New Yorkers do speak a huge variety of languages. Among these languages, the five most spoken in New York City besides English are Spanish, Chinese, Russian, Italian and French. Learn Languages Like an Opera Singer, With Anki (And More) For years, I’ve been tinkering with using Anki to learn languages. I haven’t gotten very far, but I’ve still felt in my gut that there has to be some way to learn languages much faster than we do now. And it has to involve spaced repetition for all that vocabulary. Enter Gabriel Wyner.

How to do a pen pal exchange in foreign language class February 4, 2013 by bilinguish Happy Thank a Mailman Day! (Photo credit: cascade hiker) Say what you type in French : Say what you type in Spanish the best way to start with French and Spanish! Choose the language you want to listen your text, type your text in your selected language then click on "say it". You can change the character or the voice if you want.