UK supermarkets unite after Sainsbury's advert prompts racist backlash. A group of leading UK supermarkets have joined together to take a stand against a racist online backlash that followed Sainsbury’s Christmas advertisement featuring a black family. 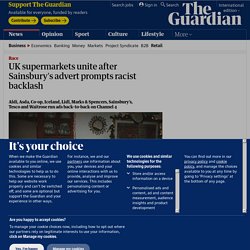 Aldi, Asda, Co-op, Iceland, Lidl, Marks & Spencers, Sainsbury’s, Tesco and Waitrose ran their adverts back-to-back during two primetime slots on Channel 4 on Friday evening, with the hashtag #StandAgainstRacism. Normally, competitors actively avoid airing their ads close together. A Channel 4 announcement introduced the ad break, saying: “Channel 4 stands up against racism. After the reaction to this year’s Sainsbury’s Christmas commercial, retailers have put their usual festive rivalries aside across two ad-breaks tonight to stand side-by-side with us too.” The Home Office, mired in racism claims, now plans another mass deportation of black people.

'Racism's still around': Notting Hill 50 years on from Mangrove. In the last scene of Mangrove, the first instalment of Steve McQueens critically acclaimed series Small Axe, the focal character Frank Crichlow is smoking outside his restaurant. 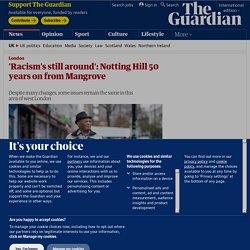 It’s a cold night and Crichlow, played by Shaun Parkes, looks weighed down by the landmark trial he and eight others had just won. As social workers, we must do more than stand in solidarity with black people. How should social workers respond to 500 years of white supremacy and racism against black people in society? 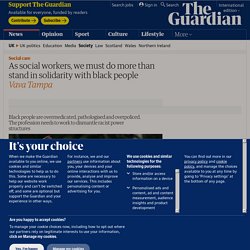 After Christchurch, Muslims need more than just your thoughts and prayers. There is a certain profundity about waking up one morning, when your only plans for the day are to go to Friday prayers with your family, to discover that on the other side of the world people just like you, doing exactly the same thing with their Friday as you intend to do with yours, have been slaughtered. 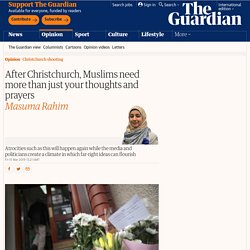 Revealed: the stark evidence of everyday racial bias in Britain. The extent of racial bias faced by black, Asian and minority ethnic citizens in 21st-century Britain has been laid bare in an unprecedented study showing a gulf in how people of different ethnicities are treated in their daily lives. A survey for the Guardian of 1,000 people from minority ethnic backgrounds found they were consistently more likely to have faced negative everyday experiences – all frequently associated with racism – than white people in a comparison poll. 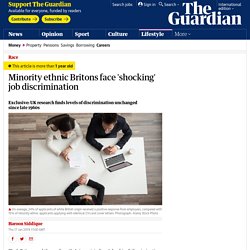 A study by experts based at the Centre for Social Investigation at Nuffield College, University of Oxford, found applicants from minority ethnic backgrounds had to send 80% more applications to get a positive response from an employer than a white person of British origin. A linked study by the same researchers, comparing their results with similar field experiments dating back to 1969, found discrimination against black Britons and those of south Asian origin – particularly Pakistanis – unchanged over almost 50 years. The research, part of a larger cross-national project funded by the European Union and shared exclusively with the Guardian before its official launch, prompted concerns that race relations legislation had failed.

“It’s clear that race relations legislation is not sufficient to hold employers to account. £3.2bn UK pay gap for black, Asian and ethnic minority workers. Black, Asian and ethnic minority employees are losing out on £3.2bn a year in wages compared to white colleagues doing the same work, according to a study that adds to pressure on the government to introduce mandatory reporting of race pay gaps. 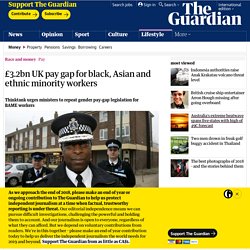 Ministers have been urged to press ahead with proposals to force large firms to report their ethnicity pay gap, after the research showed the extent of the salary disparity for Britain’s 1.9 million black, Indian, Pakistani, Bangladeshi and other minority workers. After taking account of differences in average qualifications and job types, the analysis by the Resolution Foundation found the gap rose to as much as 17%, or £3.90 an hour, for black male graduates’ pay. The thinktank called on the government to repeat the legislation requiring companies to publish gender pay gaps – but this time for ethnic minorities. Ethnic minority academics earn less than white colleagues.

Now we know there’s racial bias. The challenge is how to address it. Imagine a life inside an open-topped glass box. 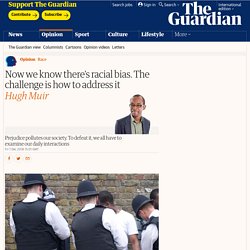 You could see what was around you, what your friends and neighbours and colleagues were doing. You could probably hear what was happening. In many and varied ways, you would be connected to your surroundings and have expectations to match. But just reach out to touch something, to connect, to truly become part of the life you see, and the fact of the box asserts itself. One of the UK's only black Michelin-starred chefs: 'Racism is their problem, not mine' The chef Michael Caines doesn’t like talking about race. 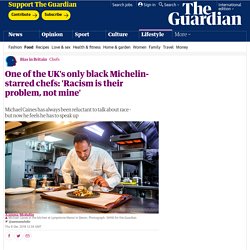 Though he’s known for a while that he’s one of two black chefs in the UK with a Michelin star, he’s always wanted the focus to be on his food and not the colour of his skin. But the rise of the far right across the world, and the notable lack of diversity in the catering and hospitality business, has led him to feel he has to speak up. 'They think I'm a gangster': the young black men caught in joblessness. In youth centres in cities across the UK young people are going into studios and remixing music. 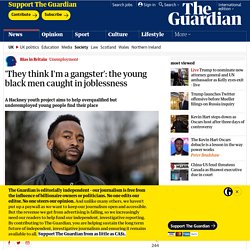 But at the Moving on Up project at Hackney Council for Voluntary Service (HCVS), young men searching for a job are remixing their names. Oluwatosin Adegoke, 23, who graduated this year from Bristol University, was an early adopter of this strategy. He’s been called Peter, the last of his four middle names, since he was a child. Sorry to Bother You review – white privilege gets a wacky wake-up call. Black medics in NHS paid thousands less than white medics. Black doctors in the NHS are paid on average almost £10,000 a year less and black nurses £2,700 less than their white counterparts, the biggest study of earnings by ethnicity has found. 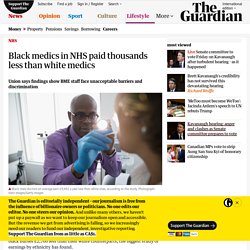 The revelations, based on analysis of 750,000 staff salaries in the NHS in England, prompted claims of racial discrimination. Black female doctors earn £9,612 a year less and black male doctors £9,492 a year less than white ones, the research exercise by NHS Digital, the service’s statistical arm, found. Black female nurses and midwives earn £2,700 a year less and black male nurses and midwives £1,872 a year less. Black personnel – those who defined themselves as black/African/Caribbean/black British – are also paid much less than white colleagues across the entire range of roles performed in the health service, NHS Digital found. Black men working in the NHS across all job types earn £5,796 less than white peers and £7,272 less than the average male pay.

. … we have a small favour to ask. The wind in my hair: one woman’s struggle against the hijab. Second woman arrested in Tehran for hijab protest. A second woman has been arrested in Iran for protesting against the country’s compulsory hijab rules after standing on a telecoms box on a Tehran street, taking off her headscarf and holding it aloft on a stick. The protest follows a similar action last month against the country’s requirement that women cover themselves from head to toe in public. Pictures posted on social media on Monday showed at least three other women standing on top of telecoms boxes in Tehran in apparent solidarity with the women, including one near Ferdowsi Square.

Golnaz Esfandiari (@GEsfandiari)These two women are being hailed as heroes by many Iranians for protesting the compulsory hijab rule that has violated women's rights in Iran for nearly four decades. pic.twitter.com/qSFOZpOkrgJanuary 29, 2018 A widely shared smartphone image of the first protest showed a young woman standing on a telecoms box on Enghelab Street in the centre of the Iranian capital. Alexandra Burke and the trouble with reality TV and race. It is absurd and prejudiced to suggest that hijab ‘sexualises’ girls. Amanda Spielman, head of Ofsted, says “creating an environment where primary school children are expected to wear the hijab could be interpreted as sexualisation of young girls” (Inspectors to question girls in primary school who wear hijab, 20 November).

Oxbridge bashing is an empty ritual if we ignore wider social inequities. Oxford accused of 'social apartheid' as colleges admit no black students. Nearly one in three Oxford colleges failed to admit a single black British A-level student in 2015, with the university accused of “social apartheid” over its admissions policies by the former education minister David Lammy. The data shows that 10 out of 32 Oxford colleges did not award a place to a black British pupil with A-levels in 2015, the first time the university has released such figures since 2010.

Oriel College only offered one place to a black British A-level student in six years. Similar data released by Cambridge revealed that six colleges there failed to admit any black British A-level students in the same year. Lammy first requested the ethnicity data from Oxford and Cambridge in 2016. Calls for FA officials to resign as Aluko says treatment ‘bordered on blackmail’ Audit lays bare racial disparities in UK schools, courts and workplaces.

White teenagers are far more likely to smoke than their minority ethnic counterparts, Roma children are falling well behind their peers at school and black men face the highest likelihood of being found guilty in court. Those are just some of the issues that will be highlighted in a government audit on race equality that will reveal deeply ingrained disparities across the country when it is published on Tuesday. Much of the data shows disadvantage for black and ethnic minority communities, and there is a postcode lottery in school performance. But it also makes clear that among the poorest children in the country, white British pupils do worst at school. Isn’t it time we called out newspapers who trade on Muslim-baiting? In August, the Times’s front-page story was “Christian girl forced into Muslim foster care”.

Kwame Kwei-Armah: ‘As a black male you’re told you can’t do this. I’ve tried to go: yes we can’ The colour of power: why is the British establishment so white? – video. 'You’re talked to as if you are a junior' – employees on workplace racism. The Guardian - Take the 1,000 most powerful people in...