How caloric restriction prevents negative effects of aging in cells. If you want to reduce levels of inflammation throughout your body, delay the onset of age-related diseases, and live longer, eat less food. 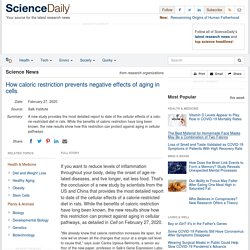 That's the conclusion of a new study by scientists from the US and China that provides the most detailed report to date of the cellular effects of a calorie-restricted diet in rats. While the benefits of caloric restriction have long been known, the new results show how this restriction can protect against aging in cellular pathways, as detailed in Cell on February 27, 2020.

"We already knew that calorie restriction increases life span, but now we've shown all the changes that occur at a single-cell level to cause that," says Juan Carlos Izpisua Belmonte, a senior author of the new paper, professor in Salk's Gene Expression Laboratory and holder of the Roger Guillemin Chair. 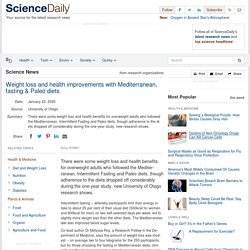 Intermittent fasting -- whereby participants limit their energy intake to about 25 per cent of their usual diet (500kcal for women and 600kcal for men) on two self-selected days per week, led to slightly more weight loss than the other diets. The Mediterranean diet also improved blood sugar levels. Co-lead author Dr Melyssa Roy, a Research Fellow in the Department of Medicine, says the amount of weight loss was modest -- on average two to four kilograms for the 250 participants, but for those choosing the fasting or Mediterranean diets, clinically significant improvements in blood pressure were also seen. High-protein diets boost artery-clogging plaque, mouse study shows: Such diets lead to weight loss but could increase heart attack risk.

High-protein diets may help people lose weight and build muscle, but a new study in mice suggests they have a down side: They lead to more plaque in the arteries. 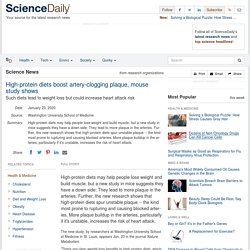 Further, the new research shows that high-protein diets spur unstable plaque -- the kind most prone to rupturing and causing blocked arteries. More plaque buildup in the arteries, particularly if it's unstable, increases the risk of heart attack. The new study, by researchers at Washington University School of Medicine in St. Louis, appears Jan. 23 in the journal Nature Metabolism. Poor mental health 'both cause and effect' of school exclusion.

Children with mental health needs require urgent support from primary school onwards to avoid exclusion, which can be both cause and effect of poor mental health, new research concludes. 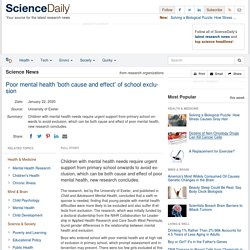 The research, led by the University of Exeter, and published in Child and Adolescent Mental Health, concluded that a swift response is needed, finding that young people with mental health difficulties were more likely to be excluded and also suffer ill-effects from exclusion. The research, which was initially funded by a doctoral studentship from the NIHR Collaboration for Leadership in Applied Health Research and Care South West Peninsula, found gender differences in the relationship between mental health and exclusion. New study debunks notion that salt consumption contributes to weight loss. High blood pressure (BP) affects more than 150 million adults in the United States, putting them at increased risk for a range of health problems, including heart attack and stroke. 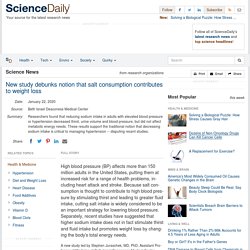 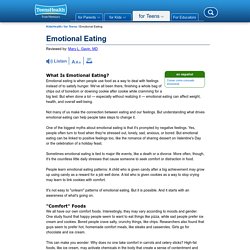 Emotional eating is when people use food as a way to deal with feelings instead of to satisfy hunger. We've all been there, finishing a whole bag of chips out of boredom or downing cookie after cookie while cramming for a big test. But when done a lot — especially without realizing it — emotional eating can affect weight, health, and overall well-being. Not many of us make the connection between eating and our feelings. But understanding what drives emotional eating can help people take steps to change it. One of the biggest myths about emotional eating is that it's prompted by negative feelings. Sometimes emotional eating is tied to major life events, like a death or a divorce. People learn emotional eating patterns: A child who is given candy after a big achievement may grow up using candy as a reward for a job well done. It's not easy to "unlearn" patterns of emotional eating. "Comfort" Foods We all have our own comfort foods. 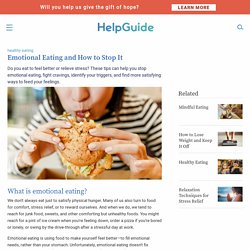 Nutritional psychiatry: Your brain on food. Think about it. 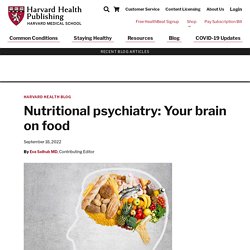 Your brain is always “on.” It takes care of your thoughts and movements, your breathing and heartbeat, your senses — it works hard 24/7, even while you’re asleep. This means your brain requires a constant supply of fuel. That “fuel” comes from the foods you eat — and what’s in that fuel makes all the difference. Non-Food Birthday and Holiday Celebrations at School. While birthday cupcakes and Halloween candy have been long-held and popular traditions in many schools, it's becoming increasingly common for schools to institute a "no food" policy for birthday and other classroom celebrations. 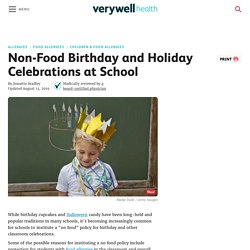 If your school does not allow food in classroom celebrations, or if you would like to start this trend yourself, the following ideas can help you brainstorm non-food ways to celebrate a child's birthday at school. Ideas for Teachers These ideas can help teachers develop a plan to celebrate birthdays without food in the classroom. 11 Ways to Celebrate Your Child's Birthday at School. School birthday celebrations can be fun, academic, and still leave your child beaming with birthday bliss! 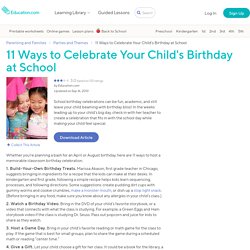 In the weeks leading up to your child’s big day, check in with her teacher to create a celebration that fits in with the school day while making your child feel special. Whether you’re planning a bash for an April or August birthday, here are 11 ways to host a memorable classroom birthday celebration. 1. Build-Your-Own Birthday Treats. Ideas for Celebrating Student Birthdays in School. Teachers celebrate many special days in their classrooms throughout the school year, but birthdays are a special celebration and teachers should make it special for each student. Here are a few ideas for celebrating student birthdays in the classroom. Birthday Placemats, Balloons, and Covers Make your students' day even more special by placing a birthday placemat on their desk. When students enter the classroom everyone will know who's birthday it is by looking at the desks.

"There has been a popular push by nutritionists and public health officials towards replacing large dishware with smaller versions to nudge people towards healthier decisions," she said. "But we have found dishware size has very little effect on the amount of food consumed. " "About 20 per cent (1 in 5) of children are overweight or obese," she said. Sodium Overload Foods. You know salty snacks like chips, pretzels, and crackers are loaded with sodium. But do you realize most of the salt you consume comes from the foods you're picking at the grocery store?

It's not just the salt shaker, says Rosemary Yurczyk, MS, RD, CDE, dietitian and diabetes educator at the University of California Davis Medical Center in Sacramento. Government guidelines recommend that people consume less than 2,300 milligrams of sodium per day -- about one teaspoon of salt. So if you eat three meals a day, you'll want to stay within 800 milligrams of sodium per meal, Yurczyk says. Trouble is, it's so easy to go overboard, even if you just want to add some extra flavor to your poultry or a little sauce over the pasta.