Emma Watson and the future of feminism. What the catcalling video gets wrong. Refusing gender stereotypes. Nicola Adams and Natasha Jonas have made history by becoming the first British women boxers to qualify for the Olympic Games. 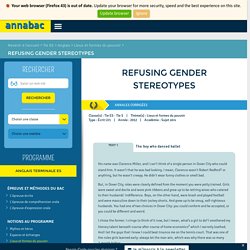 At their state-of-the-art gym in Sheffield, Britain’s elite amateur boxers see shadows of the past and a silhouette that hints at posterity. High above the walls of the gym’s three rings are posters of all 22 British post-war boxing medallists – all men. Beneath the post­ers is an outline of a fighter, and a message: “This could be you… impossible is nothing.” Not so long ago, it was indeed impossible that a woman could join this roll-call. Now, with women’s boxing about to take its place in the Olympics for the first time and Team GB’s elite women’s squad winning medals in tournaments across the globe, it seems highly likely.

Through the Glass Ceiling. Growing Number of Stay-at-Home Dads. Biggest increase among those caring for family By Gretchen Livingston The number of fathers who do not work outside the home has risen markedly in recent years, up to 2 million in 2012. 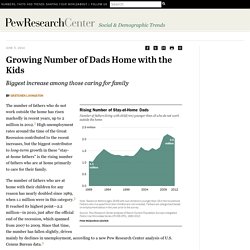 High unemployment rates around the time of the Great Recession contributed to the recent increases, but the biggest contributor to long-term growth in these “stay-at-home fathers” is the rising number of fathers who are at home primarily to care for their family. The number of fathers who are at home with their children for any reason has nearly doubled since 1989, when 1.1 million were in this category. It reached its highest point—2.2 million—in 2010, just after the official end of the recession, which spanned from 2007 to 2009. Rise in stay-at-home fathers fuelled by growing numbers of female breadwinners. The ONS said the figures reflected a growing trend where it was more common for the man to stay at home while his spouse went out to work. 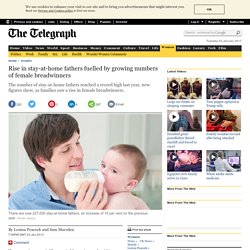 A recent European Commission report said couples where both the man and woman earn money “lost ground” during the economic downturn in favour of female breadwinners, who increased their share to almost 10 per cent. Jenny Garrett, the author of Rocking Your Role, a guide for women who earn the main salary in their family, welcomed the trend. 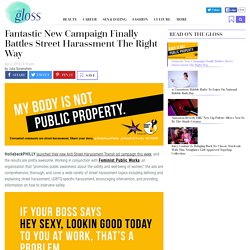 Working in conjunction with Feminist Public Works, an organization that “promotes public awareness about the safety and well-being of women,” the ads are comprehensive, thorough, and cover a wide variety of street harassment topics including defining and explaining street harassment, LGBTQ-specific harassment, encouraging intervention, and providing information on how to intervene safely. BuzzFeed spoke to Feminist Public Works and HollabackPHILLY director Rochelle Keyhan, who told them: “We were frustrated at how many people had no idea what we meant when we said ‘street harassment’ despite having knowledge of the behavior from either experiencing, perpetrating, or witnessing it. So, we decided to find a way to expand the conversation beyond our individual workshops to a broader, more accessible forum, like advertising.” Fighting Harassment Against Women With Beautiful Street Art.

If you haven’t already heard of Tatyana Fazlalizadeh, she’s the woman behind “Stop Telling Women to Smile,” the public art project that’s tackling gender-based street harassment in a big way. 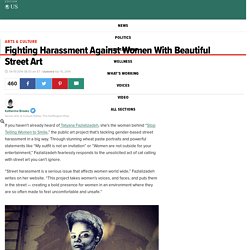 Through stunning wheat paste portraits and powerful statements like “My outfit is not an invitation” or “Women are not outside for your entertainment,” Fazlalizadeh fearlessly responds to the unsolicited act of cat calling with street art you can’t ignore. “Street harassment is a serious issue that affects women world wide,” Fazlalizadeh writes on her website. “This project takes women’s voices, and faces, and puts them in the street — creating a bold presence for women in an environment where they are so often made to feel uncomfortable and unsafe.” 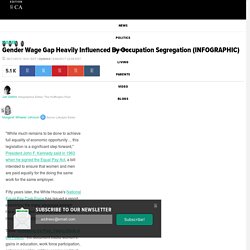 Kennedy said in 1963 when he signed the Equal Pay Act, a bill intended to ensure that women and men are paid equally for the doing the same work for the same employer. Fifty years later, the White House’s National Equal Pay Task Force has issued a report examining the many advances women have made since 1963 and the economic inequalities that persist. Titled “Assessing the Past, Taking Stock of the Future,” the document tracks women’s gains in education, work force participation, entrepreneurship, military service and tech and examines why all of these changes still haven’t resulted in pay parity. One issue that has gotten less attention than the overall 23-cent wage gap is the high percentage of women who still work in traditionally female fields and how much less workers in these fields earn.

Ending Violence against women and girls: If not you, who? New study suggests street harassment is widespread. This chart from the “Unsafe and Harassed in Public Spaces: A National Street Harassment Report,” illustrates the prevalence of street harassment among men and women in the United States. 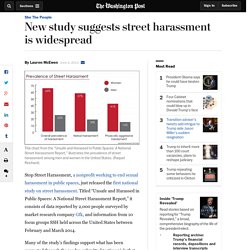 (Raquel Reichard) Stop Street Harassment, a nonprofit working to end sexual harassment in public spaces, just released the first national study on street harassment. 5 Statistics That Prove Catcalling Is A Problem (For Men Who Don’t Think So) By: Ariel Hairston@uhhangel For some strange reason, (too) many men can’t seem to wrap their heads around why street harassment is significantly problematic. 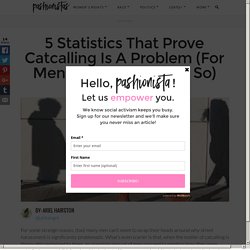 What’s even scarier is that, when the matter of catcalling is thoroughly explained to them, an alarming amount of men proceed to mention how they were catcalled once and didn’t make a big deal out of it, so women should just shut up about it already. While catcalling is absolutely unacceptable when either gender falls victim, what intensifies its effects on women is how unsafe it makes us feel. Hey baby! Women speak out against street harassment. Head down, look straight ahead. 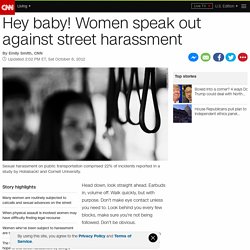 Earbuds in, volume off. Walk quickly, but with purpose. Don't make eye contact unless you need to. Stop Street Harassment. 10 Hours of Walking in NYC as a Woman. Facts and figures: Ending violence against women. Various forms of violence It is estimated that 35 per cent of women worldwide have experienced either physical and/or sexual intimate partner violence or sexual violence by a non-partner at some point in their lives. 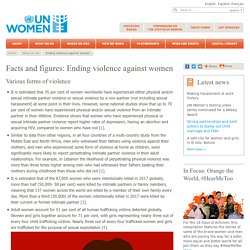 However, some national studies show that up to 70 per cent of women have experienced physical and/or sexual violence from an intimate partner in their lifetime [1]. Women who have been physically or sexually abused by their partners are more than twice as likely to have an abortion, almost twice as likely to experience depression, and in some regions, 1.5 times more likely to acquire HIV, as compared to women who have not experienced partner violence [2]. Last Week Tonight with John Oliver: Wage Gap. Only 1% of fathers have taken advantage of shared parental leave. Only 1 per cent of fathers have taken up the opportunity to share parental leave a year after the option was introduced, a survey of employers and parents has found.

According to research by My Family Care - which advises businesses on being family-friendly - and the Women's Business Council, 55 per cent of women said they would not want to share their maternity leave. The survey of more than 1,000 parents and 200 businesses found that taking up shared parental leave (SPL) was dependent on a person's individual circumstances, particularly on their financial situation and the paternity pay on offer from their employer. A decision to share leave would be dependent on their finances and their employer's enhancement of SPL, according to 80 per cent of both men and women surveyed. Shared parental leave was introduced by the previous coalition government and came into force on April 4 2015. Gender pay gap: women earn £300,000 less than men over working life. Women are likely to earn £300,000 less than men over their working lives, according to a new analysis that has sparked fresh calls for more shared parental leave to close the UK’s stubborn gender pay gap.

Before International Women’s Day on Tuesday, figures show a gap of £5,732, or 24%, in average full-time annual salaries between women and men – more than four decades after the Equal Pay Act of 1970 was introduced. Over a career of 52 years, that gap translates into a lifetime earnings shortfall of £298,064 for female employees, according to the analysis by the recruitment company Robert Half. This chart shows the state of the gender pay gap across the developed world.

Tuesday was International Women's Day, a day on the calendar that has had the sad side effect of reminding us of all the unnecessary crap women everywhere deal with on a daily basis. On average, women across the world effectively work 100 days for free every year thanks to the pervasive gender pay gap, which men's rights activists will insist on telling you doesn't exist.

In many countries, the situation is even worse for ethnic minority women: in the US, for example, women as a whole earn 74 cents for every dollar a man earns, but the figure for black women is just 60 cents, and Latina women, 56. In the EU, the situation is generally better, but not one member country has achieved gender parity in the workplace yet. In the developed world, the gap in full-time hourly earnings is starkest in South Korea and Japan, with a 36.6 per cent and 26.6. per cent gap respectively, as data from the OECD shows: Graph: Statista. Suffragettes. 11 Things To Know About the Gender Pay Gap. On Monday, President Obama declared April 12, 2016 as Equal Pay Day because on average, that’s how far into the year women have to work to make the same amount as their male counterparts did the previous year. According to the president’s proclamation, here are some facts and figures proving the pay gap clearly still exists: 1. It takes more than 100 days of extra work and waiting to cash in the same paycheck white, non-Hispanic men get to on Dec. 31. 2.

This comes down to a ratio of 79 cents for every dollar the average white, non-Hispanic man makes. Gendered Language Creates Stereotypes For Boys, Too. Gender. Log In. There are signs that consumers are beginning to push back. Recently, Disney removed gender labels from its costumes, and Target removed them from the toy aisles. Still, both remain sharply divided by color and type, as do much of children’s worlds.

Mach and mascarpone: testing how vocabulary is gendered. Kids' assumptions are turned around at career day in school. Powerful Ad Shows What A Little Girl Hears When You Tell Her She's Pretty. TAASA - Break The Box. Housework is STILL a woman's job as survey revealed just one in 10 men do more. Gender Stereotypes: Definition, Examples and Analysis. Gender Stereotypes: An Anachronism – Maverick Youth. 1950s And 60s Gender Roles.