China Says It Has Met Its Deadline of Eliminating Poverty. China on Monday claimed extreme poverty has been eliminated nationwide, the capstone of a Communist Party policy to reduce inequities in society. 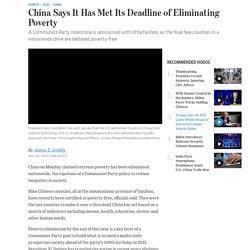 Nine Chinese counties, all in the mountainous province of Guizhou, have recently been certified as poverty-free, officials said. They were the last counties to make it over a threshold China has set based on a matrix of indicators including income, health, education, shelter and other human needs. Poverty elimination by the end of this year is a key facet of a Communist Party goal to build what is termed a moderately prosperous society ahead of the party’s 100th birthday in 2021.

President Xi Jinping has traveled the nation in recent years pledging attention to those at the lowest rungs of society, and has directed massive spending on schools, clinics, housing and cash handouts to meet the antipoverty target set in 2011. The new state capitalism - Xi Jinping is trying to remake the Chinese economy. LAST YEAR Zotye, a carmaker, used it to tackle weak sales, and Wuliangye, a distiller, to improve the quality of its baiju; it helped Zheshang Bank to digitise its operations and catalysed the development of energy-saving technologies at China National Nuclear Power. 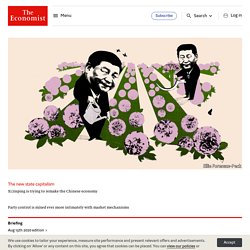 “Xi Jinping Thought on Socialism with Chinese Characteristics for a New Era” is, on the basis of these companies’ annual reports, quite the business-practice panacea. The time when private Chinese companies downplayed their links to the Communist Party is gone. By The Economist’s count, nearly 400 of the 3,900 companies listed on stock exchanges in mainland China paid homage to the Communist Party and its leader in their annual reports this year. References by both state-owned firms and their private-sector peers to Mr Xi’s guidance have increased more than 20-fold since 2017 (see chart 1). The trend reflects China’s new reality. Nothing good, say critics at home and abroad. Those observations are right. Mixing it up. Nobel Laureates Esther Duflo and Abhijit Banerjee on How to Lift People Out of Poverty. For all the worries today about the explosion of inequality in rich countries, the last few decades have been remarkably good for the world’s poor. 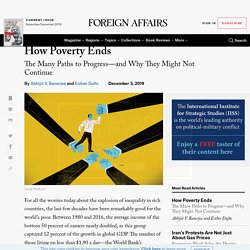 Between 1980 and 2016, the average income of the bottom 50 percent of earners nearly doubled, as this group captured 12 percent of the growth in global GDP. The number of those living on less than $1.90 a day—the World Bank’s threshold for “extreme poverty”—has dropped by more than half since 1990, from nearly two billion to around 700 million. Never before in human history have so many people been lifted out of poverty so quickly. There have also been massive improvements in quality of life, even for those who remain poor. 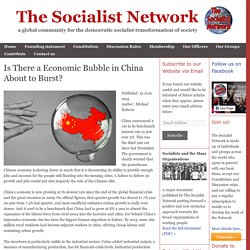 This was the third rate cut since last November. The government is clearly worried that the powerhouse Chinese economy is slowing down so much that it is threatening its ability to provide enough jobs and incomes for the people still flooding into the teeming cities. A failure to deliver on growth and jobs would put into jeopardy the rule of the Chinese elite. China’s economy is now growing at its slowest rate since the end of the global financial crisis and the great recession in 2009.

The slowdown is particularly visible in the industrial sectors. And the consumption of goods has also slowed. Above all, the crucial driver of growth – fixed-asset investment, which measures money put into big projects and factories – rose 13.5% year on year, down from a peak of 30% back in 2009, albeit at a higher rate than in the early 2000s. Capitalism? Notes.