How The Murder Of Kitty Genovese Created The Bystander Effect 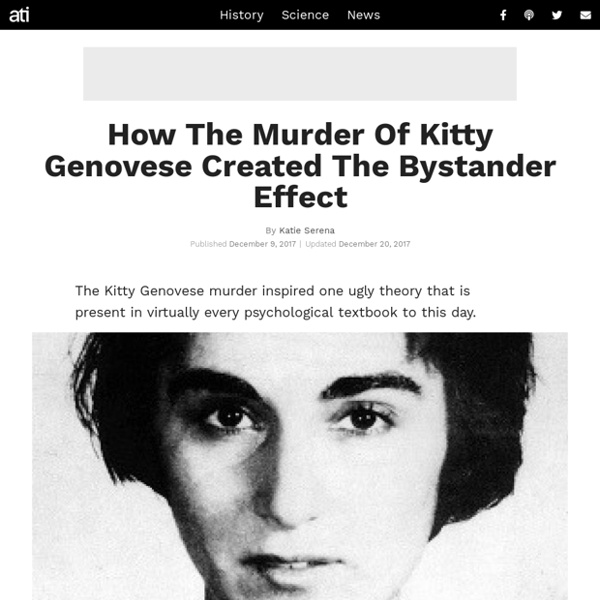 Wikimedia CommonsKitty Genovese whose muder would inspire the psychological phenomenon known as the bystander effect. At approximately 3:15 a.m. on March 13, 1964, a woman was murdered. Her name was Kitty Genovese. She was 28 years old, “self-assured beyond her years,” and had a “sunny disposition.” However, on that Friday evening, none of that mattered. As Kitty Genovese was stabbed to death in an alleyway outside her home, the friends and neighbors she had lived next to for several years stood by, choosing not to get involved as she lay there dying. Around 2:30 a.m. on the night of her attack, Kitty Genovese left the bar she worked at and headed for home. A few minutes after she left, she stopped at a traffic light. At 3:15, Genovese pulled into the parking lot of the Kew Gardens Long Island Rail Road station parking lot, which was about 100 feet from her front door. Getty ImagesKitty at work at Ev’s bar. Upon being stabbed, Genovese screamed, running toward her home.

What the Kitty Genovese Killing Can Teach Today’s Digital Bystanders As Retro Report notes, two social psychologists in New York, John M. Darley and Bibb Latané, conducted experiments that led them to posit that Ms. Genovese might have survived had there been fewer witnesses. Numbers can inhibit action, they concluded. Chapter 5: Experimental Research – Research Methods in Psychology In the late 1960s social psychologists John Darley and Bibb Latané proposed a counter-intuitive hypothesis. The more witnesses there are to an accident or a crime, the less likely any of them is to help the victim (Darley & Latané, 1968). They also suggested the theory that this phenomenon occurs because each witness feels less responsible for helping—a process referred to as the “diffusion of responsibility.” Darley and Latané noted that their ideas were consistent with many real-world cases.

Police: Up to 20 people saw gang rape - US news - Crime & courts RICHMOND, Calif. — The gang rape and beating of a 15-year-old girl on school grounds after her homecoming dance was horrific enough. But even more shocking, police say, was that up to 20 people watched and did nothing to stop it. The attack over the weekend rattled this crime-ridden city of 120,000 in the San Francisco Bay area, where one police official called it one of the most heinous crimes he has ever seen. Some students have already left the school district in response to the attack.

Khaseen Morris: Teen held for killing that bystanders filmed Image copyright Nassau County Police A New York teenager has been charged with the fatal stabbing of a 16-year-old boy whom bystanders filmed bleeding to death. Tyler Flach, 18, is accused of second-degree murder in the deadly after-school brawl that broke out not far from the victim's Long Island school. Police said that most of the "50, 60, 70" kids who witnessed the attack on Khaseen Morris did nothing to stop it. "That's egregious," said Detective Lt Stephen Fitzpatrick. "Kids stood here and didn't help Khaseen," Lt Fitzpatrick said.

Cellphone footage captures woman being violently beaten as young son tries to intervene in Salem, New Jersey SALEM, N.J. - A young mother in southern New Jersey was viciously beaten by another woman as the victim's young son looked on, reports CBS Philly. Video of the assault was later posted on Facebook. The altercation occurred outdoors Tuesday in Salem, N.J., according to the station. Police have identified the suspect as 25-year-old Latia Harris. Chief John Pelura III said that, once apprehended, Harris will face charges of aggravated assault and two counts of terroristic threats.

Why we still look away: Kitty Genovese, James Bulger and the bystander effect More than half a century later, the death of Kitty Genovese continues to remind us of the disconnect between what we believe about ourselves and how we really act under pressure. The murder of the 28-year-old outside her apartment in the Queens neighborhood of Kew Gardens in the early morning of 13 March 1964 rippled through New York City and around the world. How could a young, independent woman who lived on her own terms be so easily struck down? How could so many neighbors look on and turn away as she was stabbed repeatedly on the street and in her apartment building? What did that collective inability to act reveal about ourselves, our communities, and our belief systems?