Children more likely to be overweight if mothers smoke, study finds. Obesity Surgery May Work by Remaking Your Gut Microbiome. Weight Bias in Dietetics Education - Today's Dietitian Magazine. March 2019 Issue Weight Bias in Dietetics Education By Carrie Dennett, MPH, RDN, CD Today’s Dietitian Vol. 21, No. 3, P. 36 The Impact on Student Well-Being, Professional Diversity, and Patient Care Weight bias—negative, prejudiced attitudes about weight—and their overt manifestations of weight stigma and discrimination,1,2 impact both psychological and physical health, contributing directly to anxiety, depression, disordered eating behaviors, high blood pressure, high cortisol levels, and systemic inflammation.3-9 While there are many sources of weight bias, when bias comes from health care providers, including dietitians, the harm can be particularly acute,10-12 in part because it may lead to avoidance of health care.12-14 This is one reason the World Health Organization says weight bias is a fundamental cause of health inequalities.15 In spite of this, weight bias is present in dietetics education in overt, subtle, and systemic forms. 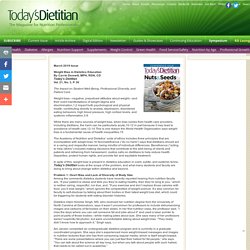 Janzen also identifies as fat. References 1. 2. How The Way Doctors Approach Body Weight Is Killing Women. TW: Fat Shaming; Eating Disorders This article was first published on Role Reboot and has been republished with permission. 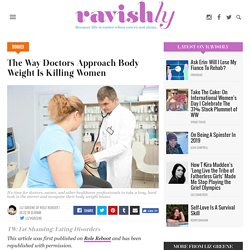 In 2009, I was struck by a mysterious stomach pain that effectively put my life on hold. I lost my job, could barely manage getting out of bed, and spiraled into a deep depression. The pain was so great that I couldn’t eat much more than a morsel here and there. I lost 80 pounds in three months, and it seemed to be all anyone could talk about. They shrugged it off when I told them I wasn’t trying to lose weight, that I was horribly ill, that the pounds were melting off because I wasn’t eating. I broke down one night, turning to my mother in my pain.

Eventually, my wish was realized. Unfortunately, I still carry that doctor’s careless words with me to this day. The horrid truth is that many doctors think the way he did. How Bad Is It? Though medical professionals should have our best interests at heart, they’re often the ones who make us feel the worst. The Government’s Bad Diet Advice. You don’t have bad genes – Levi Quackenboss. America’s Most Obese States Tend to Have One Thing in Common. Restaurant chains such as Taco Bell and Pizza Hut made headlines this week with the news that they’re axing artificial ingredients from their recipes. 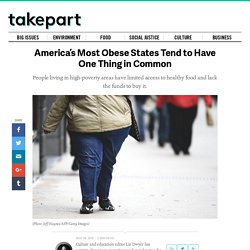 But given our expanding waistlines, it seems like Americans don’t need a healthier (but still packed with calories) Gordita Supreme or Three Cheese Stuffed Crust pizza—we need more fruits and vegetables. Indeed, the results of the annual Gallup-Healthways Well-Being Index poll reveal that in 2014 the nation’s obesity rate was nearly 28 percent, up from 27 percent in 2013. As in years past, Gallup broke the data down according to the most and least obese states. If you’re wondering why some places are fatter than others, look no further than data on poverty from the U.S. Census Bureau. So, Why Should You Care? Here are the 10 states that are the most and least obese, according to the poll results: Nine out of the 10 most obese states have poverty rates above the national average of 15.4 percent.

Want to see how your state stacks up? Weight Science: Evaluating the Evidence for a Paradigm Shift. Dieting and other weight loss behaviors are popular in the general population and widely encouraged in public health policy and health care practice as a solution for the "problem" of obesity. 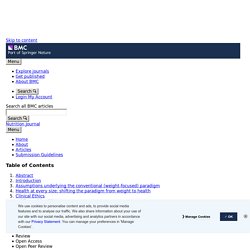 There is increasing concern about the endemic misrepresentation of evidence in these weight management policies [5, 8]. Researchers have demonstrated ways in which bias and convention interfere with robust scientific reasoning such that obesity research seems to "enjoy special immunity from accepted standards in clinical practice and publishing ethics" [5, 8, 31]. This section discusses the assumptions that underlie the current weight-focused paradigm, presenting evidence that contests their scientific merit and challenges the value of promoting weight management as a public health measure.