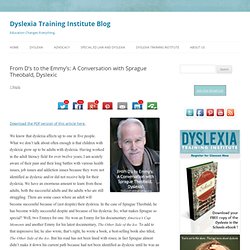 We know that dyslexia affects up to one in five people. What we don’t talk about often enough is that children with dyslexia grow up to be adults with dyslexia. Having worked in the adult literacy field for over twelve years, I am acutely aware of their pain and their long battles with various health issues, job issues and addiction issues because they were not identified as dyslexic and/or did not receive help for their dyslexia. We have an enormous amount to learn from these adults, both the successful adults and the adults who are still struggling. There are some cases where an adult will become successful because of (not despite) their dyslexia. Sprague’s first memory of school as a hostile place was when he relocated to a small private school that had very small classes and he was no longer invisible.

Sprague did not survive this constant day-to-day struggle in school unscathed. But Sprague did succeed, in a major way. Derby teenager Luke Clarke with dyslexia is building himself a global reputation. Luke Clarke in his workshop – Clarkey's Shed – which he was able to build after receiving donations from people who followed his exploits online. 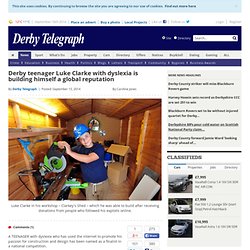 Comments (1) A TEENAGER with dyslexia who has used the internet to promote his passion for construction and design has been named as a finalist in a national competition. Luke Clarke is among five teenagers in line for the Young Builder of the Year title, with the winner to be announced at a ceremony at the House of Commons. The 15-year-old has already inspired people across the world to write blogs about him after his parents, Vicki and Adrian, encouraged him to promote his love of designing and building – along with his ideas – through social networking website Twitter.

Luke, of Oakwood, was told he had dyslexia two years ago – a diagnosis which left him "relieved" because it explained why he struggled with his school work. Vicki, 35, said: "He's really excited and honoured to be named a finalist.

Sally Shaywitz. LIVROS. The Upside of Dyslexia. The Abilities of Those with Reading Disabilities: Focusing on the Talents of People with Dyslexia. By: Thomas G. 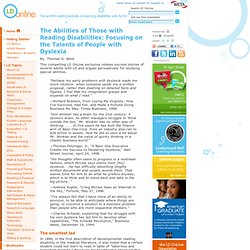 West This compelling LD OnLine exclusive relates success stories of several adults with LD and argues persuasively for studying special abilities. "Perhaps my early problems with dyslexia made me more intuitive: when someone sends me a written proposal, rather than dwelling on detailed facts and figures, I find that my imagination grasps and expands on what I read. "—Richard Branson, from Losing My Virginity: How I've Survived, Had Fun, and Made a Fortune Doing Business My Way, Times Business, 1998. "Don Winkler has a brain for the 21st century. The smartest lad In 1896, in the first description of developmental reading disability in the medical literature, it was noted that a certain student could not learn to read in spite of "laborious and persistent training.

" The quotations concerning the four highly successful individuals above would suggest that there is something about the dyslexic mind that sometimes confers significant and consequential benefits. Hidden talents. Hailey's Story. Q&A: The Unappreciated Benefits of Dyslexia. Normally dyslexia is considered a handicap: a mental deficiency that makes reading, long-division and remembering whether letters and numbers face left or right difficult. 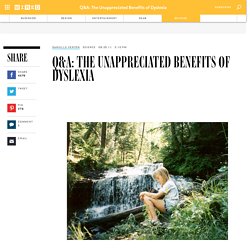 Challenging this view, learning disabilities experts Brock and Fernette Eide argue that dyslexia is an alternative way brains can be wired — one with many advantages. While dyslexic children may struggle in the early grades, they often grow into gifted story tellers, inventors and entrepreneurs. The Eides’ new book The Dyslexic Advantage, helps dyslexics and their families recognize and nurture the benefits of a dyslexic brain. The authors recently discussed some of these benefits with Wired. Wired: What is your working definition of dyslexia? Brock Eide: The generally accepted definition focuses on the difficulties with reading and spelling that are unexpected, given a child’s individual level of intelligence and their educational exposure.

Wired: What are the major misconceptions surrounding the condition? Giving Voice to a Young Person's Dyslexia Journey. Jennifer realized she could help other kids—and their parents—by telling her own story, the story of a 12-year-old girl with dyslexia. 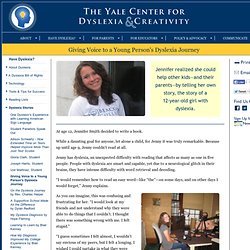 At age 12, Jennifer Smith decided to write a book. While a daunting goal for anyone, let alone a child, for Jenny it was truly remarkable. Because up until age 9, Jenny couldn’t read at all. How One School Got it Right. What Happens When a School and Its Teachers Provide a Supportive Environment for Dyslexics In a speech for his eighth grade graduation from Marin Country Day School (MCDS), a K-8 school, Dylan recalls a community that supported one dyslexic with encouragement and helpful interventions. 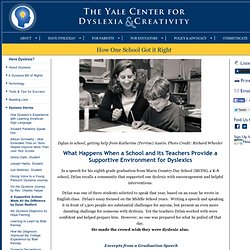 Dylan was one of three students selected to speak that year, based on an essay he wrote in English class. Dylan's essay focused on the Middle School years. Writing a speech and speaking it in front of 1,500 people are substantial challenges for anyone, but present an even more daunting challenge for someone with dyslexia. Yet the teachers Dylan worked with were confident and helped prepare him. 7e9517_fe8a2598f6de4f908df8c0edf5e684b7.pdf.