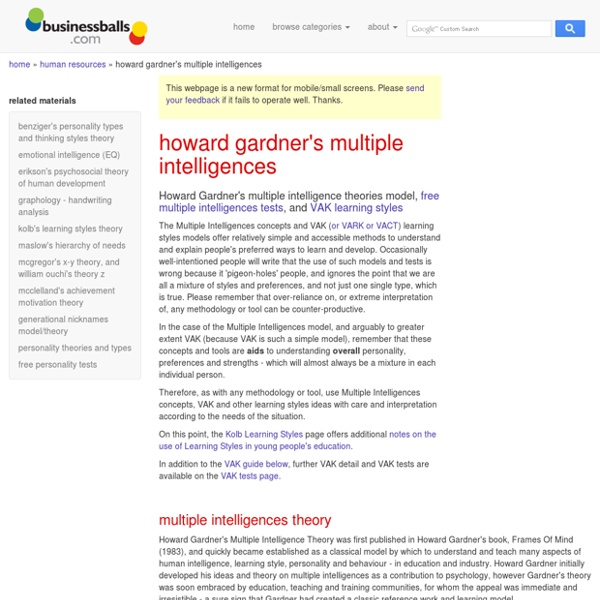 multiple intelligences theory Howard Gardner's Multiple Intelligence Theory was first published in Howard Gardner's book, Frames Of Mind (1983), and quickly became established as a classical model by which to understand and teach many aspects of human intelligence, learning style, personality and behaviour - in education and industry. Howard Gardner initially developed his ideas and theory on multiple intelligences as a contribution to psychology, however Gardner's theory was soon embraced by education, teaching and training communities, for whom the appeal was immediate and irresistible - a sure sign that Gardner had created a classic reference work and learning model. Howard Gardner was born in Scranton, Pennsylvania USA in 1943 to German Jewish immigrant parents, and entered Harvard in 1961, where, after Gardner's shift from history into social relations (which included psychology, sociology, and anthropology) he met his early mentor Erik Erikson. multiple intelligences tests see also

Auditory Or Visual Processing Children who have Sensory Processing Disorder will almost always have, to various degrees, some level of auditory or visual processing deficits. No child is born with perfect auditory processing. This is a learned, developed and acquired skill. An Audiologist cannot perform a reliable Auditory Processing Evaluation until the child is seven years old, and developmentally at least halfway through the first grade. There is much intervention that can be done in the interim, to aid them in developing more efficient processing prior to school age. Auditory Processing: When you speak to a child that seems not to hear you, even though their hearing has been checked and was within normal limits, gently touch a shoulder, or crouch down in front of them, and speak directly to them. Think of this in adult terms, and you'll understand. "KIDS! Can we understand, and give them a minute to respond? We can teach them to remind themselves as they walk away, what they are trying to remember. Consider this:

The Readability Test Tool What It Does The Readability Test Tool takes the text on your web page and gives a score for the most used readability indicators. Why is readability important? Did you know that the average American adult reads at a 7th to 9th grade level? Keeping your content within that range is a great way to maximize your readership, and our readability tool is here to help. It doesn’t matter what you’re saying if no one can comprehend it. That’s not all, though: If you’re writing for something like a medical publication, you don’t want to write at a 3rd grade level. If your audience expects a specific type of writing, failure to meet that expectation can be jarring. It can be hard to write consistently at a certain grade level, especially if doing so is contrary to your usual writing style. Use this tool to measure the readability of your content and you’ll end up with a masterpiece tailor-made for your audience. Readability Test Tool FAQ Q: Who can use the readability test tool? A: Anyone!

Erik Erikson's Psychosocial Theory of Human Development, eight crisis stages human life-cycle, for teaching and learning, child development He also referred to his theory as 'epigenesis' and the 'epigenetic principle', which signified the concept's relevance to evolution (past and future) and genetics. Erikson explained his use of the word 'epigenesis' thus: "...epi can mean 'above' in space as well as 'before' in time, and in connection with genesis can well represent the space-time nature of all development..." (from Vital Involvement in Old Age, 1989). In Erikson's theory, Epigenetic therefore does not refer to individual genetic make-up and its influence on individual development. Erikson, like Freud, was largely concerned with how personality and behaviour is influenced after birth - not before birth - and especially during childhood. erik erikson's eight stages of psychosocial development Like other seminal concepts, Erikson's model is simple and elegant, yet very sophisticated. The main elements of the theory covered in this explanation are: N.B. erikson's psychosocial theory - summary diagram N.B. N.B. in conclusion

Educational Technology and Mobile Learning: 6 Must Watch TED Talks on Autism April 2, 2016 Autism Spectrum Disorder (ASD) is effectively a set of ‘complex disorders of brain development’. Most of us in education have dealt with students struggling with ASD and we know exactly what these students go through in their learning. But while ASD poses some learning challenges it should never be viewed as a crippling condition. 1- How autism freed me to be myself, by Rosie King 2- What I've learned from my autistic brothers, by Faith Jegede 3- Autism — what we know (and what we don’t know yet), Wendy Chung 4- In the key of genius, by Derek Paravicini and Adam Ockelford 5- The world needs all kinds of minds, by Temple Grandin 6- A new way to diagnose autism, by Ami Klin

Welcome to Units of Sound Presenting The Alpha, Beta and Omega Male | HalloftheBlackDragon.com So it’s 2010 and labeling is all the rage, with bloggers like myself spilling our collective opinions into the matrix of knowledge that is the internet, once in awhile like minds will create a surge or “meme” that becomes the buzzword or “in thing” for a time until a new one comes together to take its place. The latest buzz-word stems from a topic that I have touched on multiple times – which is the death of the Alpha male. In our modern times we men are reminded almost daily that it is career-driven women that are the new entrepreneurs, career-driven women who are staying single due to unworthy broke men and career-driven women writing articles about how men aren’t of the stock that their daddies were. When faced with this sort of pressure you can either ignore the ridicule and pursue life or let it beat you down into the ground without much of a fight. While it may sound romantic in some facets (well not the X-Box portion), it is pretty much frowned upon by our Capitalist society.

Dyslexia Treatment For Adults & Children Online in Australia About DISC: What is a DISC Test or Assessment? Dominant (D) Direct, outspoken, results-oriented, a leader, problem-solver Best characterized by: Donald Trump Influencing (I) Friendly, outgoing, talkative, optimistic, the life of the party, people-oriented Best characterized by: Bill Clinton Steady (S) Team player, stable, consistent, maintains the status quo, peacemaker, family-oriented, patient Best characterized by: Fred Rogers Compliant (C) Logical, organized, data-driven, methodical, perfectionist, detail-oriented Best characterized by: Bill Gates What is DISC? DISC is often described as a "Personality Test". A DISC Profile utilizes a method for understanding behavior, temperament, and personality. The DISC Personality Profile is based on the work of renowned psychologist Dr. Dominance (D) Influence (I) Steadiness (S) Conscientiousness (C) But he never actually developed a DISC Test or DISC Assessment to measure these 4 DISC Styles. The acronym "DISC" is taken from the first letter of each of these behavioral traits.