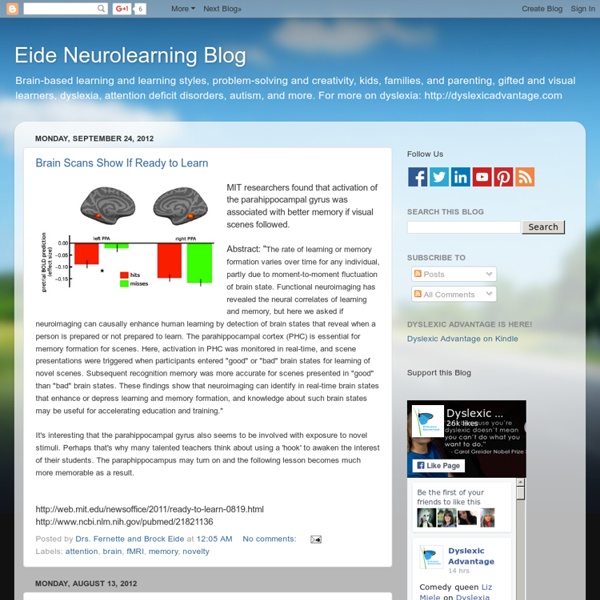 "If there were only 10 problems on a page, I could do them all. But when there are 40 on a page, I can't do any of them." - 10 year old student Visual overload and visual crowding are common problems in every school classroom or company work group, but the mistakes and errors that result from them are rarely recognized or traced back to their true source. It is a paradox - the more you see, the less you see, but it all makes sense if one recognizes that a child or an adult's visual working memory deskspace can become easily overloaded. For visual scientists, visual crowding is a specific term that refers to a greater difficulty in seeing when other visual objects are present. When we look at a complex scene, for instance the picture above, it is impossible to take in all the other visual details.

What is a gifted child? Written by David Farmer Wednesday, 12 December 2007 07:11 A good question to start with. The word "gifted" has been defined differently by different academics and practitioners and is often considered by many to be an unfortunate term, but it has become generally associated with a child whose potential in one or more areas of skill would place him or her in the top 2-5% of children of the same age. Notice that this does not assume a narrow view of academic intelligence - the areas of skill can be traditionally academic, or creative, intrapersonal etc.

Dyscalculia - Wikipedia, the free encyclopedia Dyscalculia is difficulty in learning or comprehending arithmetic, such as difficulty in understanding numbers, learning how to manipulate numbers, and learning math facts. It is generally seen as a specific developmental disorder like dyslexia. Dyscalculia can occur in people from across the whole IQ range, often, but not always, involving difficulties with time, measurement, and spatial reasoning.[1][2] Estimates of the prevalence of dyscalculia range between 3 and 6% of the population.[1][2] A quarter of children with dyscalculia have ADHD.[3] Mathematical disabilities can occur as the result of some types of brain injury, in which case the proper term is acalculia, to distinguish it from dyscalculia which is of innate, genetic or developmental origin. Dyscalculia has been associated with females who have Turner's Syndrome.

Gifted Homeschoolers Forum “ -- Zen Koan We are all underachievers. Or so it seems to me. That most of the time we could do better as individuals seems obvious. Psychometricians often claim we are smarter than ever. I don’t know – I tend to think that while as individuals we may be getting smarter (better nutrition and all, though make sure to supplement those Omega-3s), our collective intelligence, in our neighborhoods and in the world community, is increasingly impoverished, and, as a society, we get dumber all the time.

untitled What Inspires You? This is your INSPIRATION BANK. You will create a page in your “Inspiration Journal” for each of these ideas. There are no limits for your Inspiration pages. I want you to open your mind, use your senses and creativity. Visual and Auditory Processing Disorders By: National Center for Learning Disabilities (NCLD) (1999) Introduction Visual and auditory processing are the processes of recognizing and interpreting information taken in through the senses of sight and sound. The terms, "visual and auditory processing" and "visual and auditory perception", are often used interchangeably.

How coloured lenses helped Ben read Ben Osborne-Harris is a bright teenager, who has sat two of his GCSEs a year earlier than normal. But just a couple of years ago, the 13-year-old London schoolboy was struggling badly - because he could not read properly. "He just found it incredibly difficult to grasp reading at school," said his mother Gaynor. Planet of the As « Chasing Hollyfeld Like most schools, September is when we all start to schedule our first parent-teacher conferences of the year. We began this process when the girls started kindergarten, eagerly awaiting the conference, and hoping to hear those words every parent (thinks they) want to hear: she’s smart, she’s wonderfully behaved, she’s doing just great. Our first conference for the girls was a shock: we’re not sure what to do with them.