Prof J Elliott. House of Commons - Register Of All-Party Groups as at 19 December 2014: Dyslexia and Specific Learning Difficulties. Patterns of Developmental Dyscalculia With or Without Dyslexia. The full text article is temporarily unavailable. 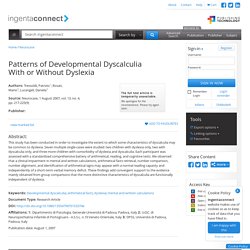 We apologise for the inconvenience. Please try again later. Abstract: Dyslexia Information:Â Typefaces for Dyslexiaâ€“ an article fromÂ iansyst Ltd. Dyslexia is a disability which is very sensitive to particular typefaces, both in print and on screen. 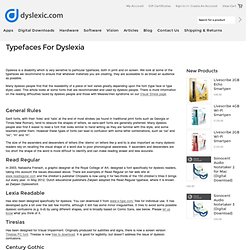 How coloured lenses helped Ben read. Ben Osborne-Harris is a bright teenager, who has sat two of his GCSEs a year earlier than normal. 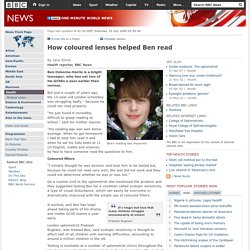 But just a couple of years ago, the 13-year-old London schoolboy was struggling badly - because he could not read properly. "He just found it incredibly difficult to grasp reading at school," said his mother Gaynor. "His reading age was well below average. When he got homework I had to help him read it and when he sat his Sats tests at 11 (in English, maths and science) he had to have someone read the questions to him. Coloured filters "I initially thought he was dyslexic and took him to be tested but, because he could not read very well, the test did not work and they could not determine whether he was or was not.

" On a routine visit to the optometrist she mentioned the problem and they suggested testing Ben for a condition called scotopic sensitivity, a type of visual disturbance, which can easily be overcome or dramatically improved with the simple use of coloured filters. Missing treatments. Canadian Dyslexia Association "Index of /english/files" Colombian guerrillas help scientists locate literacy in the brain. A unique study of former guerrillas in Colombia has helped scientists redefine their understanding of the key regions of the brain involved in literacy. 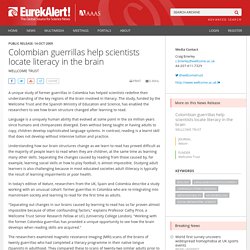 The study, funded by the Wellcome Trust and the Spanish Ministry of Education and Science, has enabled the researchers to see how brain structure changed after learning to read. Language is a uniquely human ability that evolved at some point in the six million years since humans and chimpanzees diverged. Even without being taught or having adults to copy, children develop sophisticated language systems. In contrast, reading is a learnt skill that does not develop without intensive tuition and practice.

Understanding how our brain structures change as we learn to read has proved difficult as the majority of people learn to read when they are children, at the same time as learning many other skills. Particularly important were the connections to and from an area of the brain known as the angular gyrus. Characteristics of Dyslexia. Patrick Dempsey, of Grey's Anatomy Excerpt of an article published on the USA Weekend website by Michele Hatty "Dyslexia really hurt me during auditions. 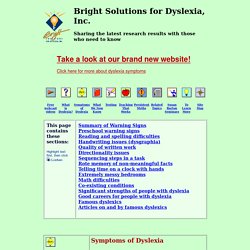 There was a 10-year period where I had to memorize pages of dialogue and invest so much of my time and energy into every audition, going in knowing I wouldn't get it anyway," Patrick Dempsey says with a trace of bitterness. Grey's creator, Shonda Rhimes, admits Dempsey's dyslexia threw her at first, particularly at the first few "table readings" -- meetings when the cast gathers to read fresh scripts aloud. "I did not know about Patrick's dyslexia in the beginning," she says. "I actually thought that he didn't like the scripts from the way he approached the readings. " "When I found out, I completely understood his hesitation. Developmental reading disorder: MedlinePlus Medical Encyclopedia.

Does Dyslexia Exist? Dyscalculia - Wikipedia, the free encyclopedia. Dyscalculia is difficulty in learning or comprehending arithmetic, such as difficulty in understanding numbers, learning how to manipulate numbers, and learning math facts. It is generally seen as a specific developmental disorder like dyslexia. Dyscalculia can occur in people from across the whole IQ range, often, but not always, involving difficulties with time, measurement, and spatial reasoning.[1][2] Estimates of the prevalence of dyscalculia range between 3 and 6% of the population.[1][2] A quarter of children with dyscalculia have ADHD.[3] Mathematical disabilities can occur as the result of some types of brain injury, in which case the proper term is acalculia, to distinguish it from dyscalculia which is of innate, genetic or developmental origin.

Dyscalculia has been associated with females who have Turner's Syndrome. [citation needed] History[edit] Etymology[edit] The term dyscalculia dates back to at least 1949.[5][6] Synonym - Numlexia [7] Problems with counting[edit] Treatment[edit] Dyslexia and Alexia. Dyslexia is a disturbances in the ability to read, whereas alexia refers to a complete loss of reading ability. 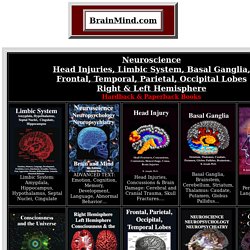 In general, whereas dyslexia is primarily a congenital disturbance, alexia is an acquired disorder and is due to a neurological injury generally in the vicinity of the temporal, occipital, parietal lobe. ALEXIA There are a variety of theories which purport to explain the mechanisms involved in reading and the comprehension of written language. Reading, of course, requires activation of the visual areas in the occipital and temporal lobes, so that the symbolic form of the letter or word is perceived, which in turn enables the viewer to determine that the form is a letter or a series of letters making up a word. However, not only must letters or groups of letters be recognized and their temporal order ascertained (referred to as "orthographic" processing); but there must be semantic processing.

For example, injuries the left IPL can disrupt the ability to read and spell. Dyslexia Scotland. Dyslexic Brian @ The University of Bristol Freshers' Fair : Dyslexic Brian. Dyslexic entrepreneurs: the incidence; their coping strategies and their business skills. Dyslexia in the Foreign Language Classroom (TEFL Net) A practical guide for teachers By Ania Krzyzak Education is undoubtedly the birthright of all children. 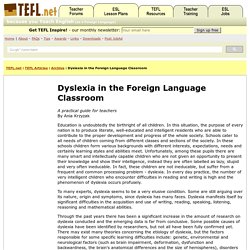 In this situation, the purpose of every nation is to produce literate, well-educated and intelligent residents who are able to contribute to the proper development and progress of the whole society. Schools cater to all needs of children coming from different classes and sections of the society. In these schools children form various backgrounds with different interests, expectations, needs and certainly learning styles and abilities meet. Unfortunately, among these pupils there are many smart and intellectually capable children who are not given an opportunity to present their knowledge and show their intelligence, instead they are often labelled as lazy, stupid and very often ineducable. Dyslexia in the workplace - Dyslexia Adults Link - dyslexia adult.

Dyslexia or other specific learning difficulties. Eide Neurolearning Blog. Experiences of teachers and trainee teachers who are dyslexic. Graphic Journey Blog: God's gift. For years I went through school-life thinking that I was educationally inferior to many of my friends. 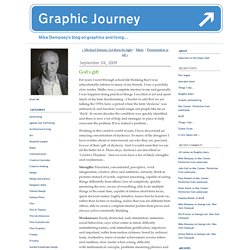 I was a painfully slow reader. Impaired tuning of a fast occipito-temporal response for print in dyslexic children learning to read. Dyslexic and control children The 15 children who were below the 10th percentile of the norms of the Salzburger reading test (Landerl et al., 1997); correct word-per-minute norms: Karin Landerl, personal communication), were regarded as dyslexic and compared to 22 children who did not show reading problems and who also did not have a familial history of dyslexia. 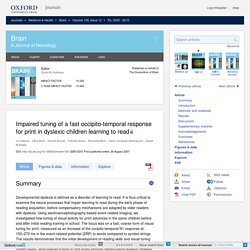 According to this criterion 54.2% of the children at risk were dyslexic versus only 8.3% of the children without familial risk. This was in the expected range for both groups considering the 10th percentile cut-off used (Shaywitz and Shaywitz, 2005), and confirms the importance of familial factors for dyslexia (Gallagher et al., 2000; Pennington and Lefly, 2001). Visual specialization for print (word–symbol contrast) Behavioural data After the initial reading training the children were more accurate at detecting targets than they had been 1.75 years earlier in kindergarten [age, F(1,35) = 46.6, P < 0.001, compare Table 2]. Fig. 2. Inhibition of Primitive Reflexes to aid Laterality, Hemispherical Dominance and Improve Reading Ability. Ipicthat - Free Online Dyslexic Talking Picture Dictionary. NRDC : Dyslexia. Dr Michael Rice with Professor Greg Brooks of NRDC. 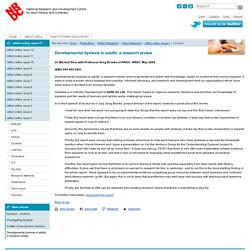 Some people may also have to concentrate more to remember what they have already read, which means they will tire more easily. When it comes to website design, keep these in mind: Text size – the minimum recommended font size for users with dyslexia is 12pt. Printed material should always be made available at this size.Text scaling – on a website you may wish to use a default size smaller than 12pt. Other Reading If you want to procure, or design and build sites with accessibility in mind in the UK, you’ll find the following documents useful: (The article was originally published by JackP – (and titled designing for Dyslexia.) of The Pickards who kindly allowed me (Shaun Anderson) to republish it here.)

What is behavioural optometry? What Is Hyperlexia? What Is Orthographic Knowledge? - WWW support for nursing students with dyslexia and their tutors.