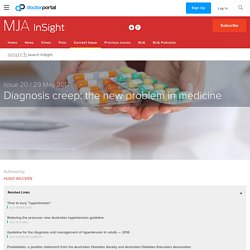 From one day to the next, millions of otherwise healthy people were deemed to be at risk of heart disease and in need of drugs. Some doctors scratched their heads, but the guidelines were adopted by many professional bodies. Risk and disease. The pre-diabetes tidal wave - harbinger of doom or symptom of an overdiagnosis epidemic? Last updated 05:00, April 15 2017 With obesity rates soaring, fans of the prediabetes label hope they can shock people into lifestyle change, preventing an epidemic of diabetes. 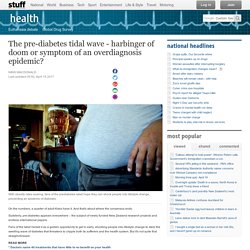 On the numbers, a quarter of adult Kiwis have it. And that's about where the consensus ends. Suddenly, pre-diabetes appears everywhere – the subject of newly funded New Zealand research projects and endless international papers. Controversies in diagnosis and management of community-acquired pneumonia. Too many patients get liver tests they don't need, which can raise fears and costs. It can start with the quick check of a box. 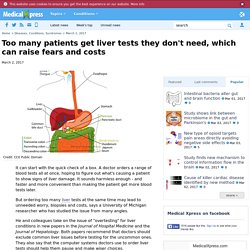 A doctor orders a range of blood tests all at once, hoping to figure out what's causing a patient to show signs of liver damage. It sounds harmless enough - and faster and more convenient than making the patient get more blood tests later. But ordering too many liver tests at the same time may lead to unneeded worry, biopsies and costs, says a University of Michigan researcher who has studied the issue from many angles. Frequency of and variation in low-value care in primary care: a retrospective cohort study. + Author Affiliations Correspondence to: Sacha Bhatia, sacha.bhatia@wchospital.ca Abstract. 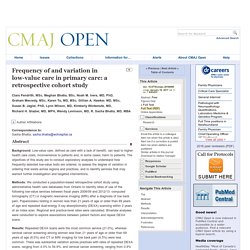 Reevaluation of Diagnosis in Adults With Physician-Diagnosed Asthma. Question Can current asthma be ruled out and can asthma medications be safely stopped in some adult patients with physician-diagnosed asthma? 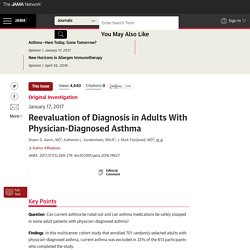 Findings In this multicenter cohort study that enrolled 701 randomly selected adults with physician-diagnosed asthma, current asthma was excluded in 33% of the 613 participants who completed the study. Meaning Among some adult patients with physician-diagnosed asthma, reassessing that diagnosis may be warranted. The “Rainbow” of Extra Blood Tubes—Useful or Wasteful Practice? Clinical laboratories often receive extra blood tubes beyond what is needed for associated laboratory test orders. 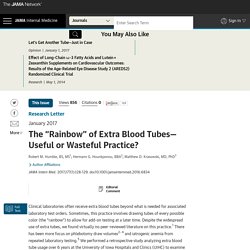 Sometimes, this practice involves drawing tubes of every possible color (the “rainbow”) to allow for add-on testing at a later time. Despite the widespread use of extra tubes, we found virtually no peer-reviewed literature on this practice.1 There has been more focus on phlebotomy draw volumes2- 4 and iatrogenic anemia from repeated laboratory testing.5 We performed a retrospective study analyzing extra blood tube usage over 6 years at the University of Iowa Hospitals and Clinics (UIHC) to examine how often extra tubes were used for add-on orders. Dealing with uncertainty in a time of plenty. AHA: Unnecessary Stress Testing Still Alive And Kicking? NEW ORLEANS -- Not all health systems are cutting back on cardiac stress testing, according to a population-based study reported here. 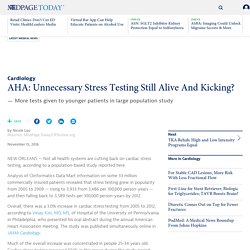 Analysis of Clinformatics Data Mart information on some 33 million commercially insured patients revealed that stress testing grew in popularity from 2005 to 2009 -- rising to 3,933 from 3,486 per 100,000 person-years -- and then falling back to 3,589 tests per 100,000 person-years by 2012. Overall, there was a 3.0% increase in cardiac stress testing from 2005 to 2012, according to Vinay Kini, MD, MS, of Hospital of the University of Pennsylvania in Philadelphia, who presented his oral abstract during the annual American Heart Association meeting.

The study was published simultaneously online in JAMA Cardiology. Much of the overall increase was concentrated in people 25-34 years old. Cardiac stress testing increased 59.1% in this group during the study period, from 543 to 864 tests per 100,000 person-years. Pre-diabetes: can prevention come too soon? - Evidently Cochrane. In this guest blog, Cochrane UK Senior Fellow in General Practice, Richard Lehman, suggests that pre-diabetes is a form of disease-mongering as he looks at the latest Cochrane evidence. 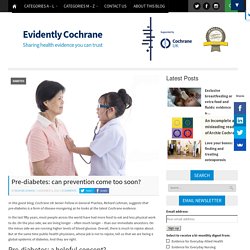 In the last fifty years, most people across the world have had more food to eat and less physical work to do. On the plus side, we are living longer – often much longer – than our immediate ancestors. On the minus side we are running higher levels of blood glucose. Overall, there is much to rejoice about. Why most health checkups are a scam meant to convert healthy people into patients. The message that prevention is better than cure has been drilled into us ever since we were children. 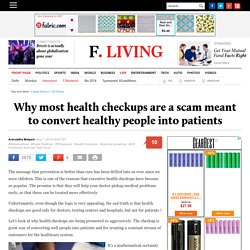 This is one of the reasons that executive health checkups have become so popular. The promise is that they will help your doctor pickup medical problems early, so that these can be treated more effectively. Unfortunately, even though the logic is very appealing, the sad truth is that health checkups are good only for doctors, testing centers and hospitals, but not for patients ! Overdiagnosis of heart failure in primary care: a cross-sectional study. Are we causing anemia by ordering unnecessary blood tests? : Cleveland Clinic Journal of Medicine. CCJM 2016 Jul;83(7):496-497. 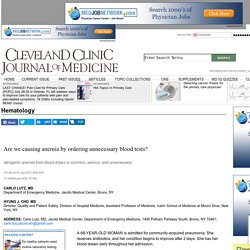 CARLO LUTZ, MD Department of Emergency Medicine, Jacobi Medical Center, Bronx, NY HYUNG J. CHO, MD Director, Quality and Patient Safety, Division of Hospital Medicine; Assistant Professor of Medicine, Icahn School of Medicine at Mount Sinai, New York, NY. What are the risks of overtreating the many to help the few? Most health-conscious people are familiar with the concept of risk factors for disease. We’re too familiar, in fact. A risk factor is like the guest that nobody invited to the party, a spoiler.

Though we might feel fine now, our individual risk for (fill in the blank) tells us that our wellbeing might not last. That vague and remote prospect of a stroke or a tumour has taken on a sharply numerical precision, thanks to screening tests that expose and quantify our risk factors. The term stems from the Framingham Heart Study, which began in 1948. Since no single factor was able to predict the heart attacks that occurred in Framingham, the study designers thought to combine half a dozen of them in what became the first numerical risk calculator, called the Framingham Risk Score. Lowering the Bar: Medicine in the 21st Century.

See the accompanying infographic “How Everyday Conditions Become Medical Disorders” here. As many as 16 million Americans are prone to screaming and pounding on the dashboard when someone cuts them off in traffic. Medicalization and overdiagnosis: different but alike. What Everyone Should Know about Lab Tests. A new study estimates that in the United States, some 251,000 deaths per year occur because of errors in medical care. This makes medical errors the third leading cause of death, only after heart disease and cancer. Though this is alarming and concerning, it highlights a much larger problem, as many medical errors aren't lethal. One proposal defines a medical error as "an act of omission or commission in planning or execution that contributes or could contribute to an unintended result. " By this definition, failures in laboratory tests certainly qualify. Lab test failures contribute to delayed or wrong diagnoses and unnecessary costs and care.

Order your own lab tests. What could go wrong? LabCorp, one of the largest outpatient lab providers in the USA, is soon going to let you skip the tedium of a doctor’s visit to get lab work done. Want some tests? Come on down! I’ve got mixed feelings about this. While there are some tests that seem reasonable for people to do on their own — pregnancy and HIV tests come to mind — others may lead to problems. Medicalization: Current Concept and Future Directions in a Bionic Society. The psychological harms of screening: the evidence we have versus the evidence we need. Inappropriate repeats of 6 common tests in a Canadian city. Overuse of Testing in Preoperative Evaluation and Syncope: A Survey of HospitalistsOveruse of Testing in Preoperative Evaluation and Syncope. From Brigham and Women's Hospital and Harvard Medical School, Boston, Massachusetts, and University of Michigan Medical School, VA Ann Arbor Healthcare System, and University of Michigan, Ann Arbor, Michigan.

Disclaimer: The views expressed in this article are those of the authors and do not necessarily reflect the position or policy of Blue Cross Blue Shield of Michigan, the Department of Veterans Affairs, or the Society of Hospital Medicine. Acknowledgment: The authors thank the Society of Hospital Medicine for its assistance with this project; Andrew Hickner for assistance with conducting the survey and preparing the manuscript; Wyndy Wiitalia, Edward Kennedy, and M. Todd Greene for assistance with statistical analysis; and David Studdert for his comments on an earlier version of the manuscript. Disclosures: Disclosures can be viewed at www.acponline.org/authors/icmje/ConflictOfInterestForms.do? MsNum=M14-0694. Current Author Addresses: Dr. Drs. Dr. Ms. Dr. Drafting of the article: A. Derivation and validation of a clinical decision rule to identify young children with skull fracture following isolated head trauma.

Screening for cardiovascular disease risk factors beginning in childhood. Study Suggests Autism Is Being Overdiagnosed. Autism may be overdiagnosed in as many as 9 percent of children, U.S. government researchers reported Friday. It might be because autism covers such a broad range of symptoms and behaviors and is difficult to diagnose, and it may also be because increasing awareness about autism means there are resources to help kids who get the diagnosis, the team at the Centers for Disease Control and Prevention and the University of Washington found.

The survey also suggests that up to 4 percent of children are helped with early therapy, or outgrow their symptoms, Stephen Blumberg of the National Center for Health Statistics and colleagues found. Stress Testing in the Emergency Room: Not Which test but whether any test should be done. Who should receive bone mineral density testing? C Difficile Overdiagnosis ACP: Hospitalist Weekly - 16 September 2015. In the News for the Week of September 16, 2015 Clostridium difficile Molecular testing for C. difficile leads to overdiagnosis, increased costs, study finds Patients who had positive PCR tests for C. difficile but negative toxin immunoassays were unlikely to have C. difficile-related complications and deaths. Chronic Kidney Disease Can Be Dubious Diagnosis. Screening for type 2 diabetes mellitus: a systematic review for the U.S. Preventive Services Task Force. Evidence-Based Guidelines to Determine Follow-up Intervals: A Call for Action.

Urinalysis Orders Among Patients Admitted to the General Medicine Service. Prevalence of over-/misdiagnosis of asthma in patients referred to an allergy clinic. The overtreatment of 'mild' hypertension is causing more harm than good, say experts. Overdiagnosis of bone fragility in the quest to prevent hip fracture. After Nearly A Decade Of Rapid Growth, Use And Complexity Of Imaging Declined, 2008–14. + Author Affiliations. We Are Giving Ourselves Cancer. Patients vent frustrations over MRI waits they say increase suffering. Toward a comprehensive management strategy for incidental findings in imaging. The Risks of Overusing CT Scans.

Imaging-based screening: maximizing benefits and minimizing harm. Heavy Use Of CT Scans Raises Concerns About Patients’ Exposure To Radiation. FDA: Risks of gadolinium contrast for MRI. When a test is too good: how CT pulmonary angiograms find pulmonary emboli that do not need to be found. Hypoactive sexual desire disorder: inventing a disease to sell low libido. Pre-Osteoarthritis. Large Swedish study casts doubt on autism 'epidemic' — The over-medicalisation of illness in the NHS is down to patients acting like customers. CCHR: Psychiatry—Labeling Kids with Bogus 'Mental Disorders'. ADHD diagnoses among adults 'epidemic': doctor.

Treatment of Subclinical Hypothyroidism or Hypothyroxinemia in Pregnancy - Journals - NCBI. Brief resolved unexplained event. 5 Things Your Baby Should Avoid In The NICU. Pregnant Women Get More Ultrasounds, Without Clear Medical Need. Group B Strep Support - Prevention. Epidemiologic Trends in Neonatal Intensive Care, 2007-2012. Subclinical Hypothyroidism During Pregnancy—Should You Expect This When You Are Expecting?  A Teachable Moment. Maternal and neonatal consequences of treated and untreated asymptomatic bacteriuria in pregnancy: a prospective cohort study with an embedded randomised controlled trial.