Massive Oil Spill In Yellowstone River Contaminates Drinking Water – Counter Current News. Another Pipeline Bursts Endangering Drinking Water Of 6 Million People – Same Company Behind Dakota Access Pipeline – Counter Current News. While most of us are enjoying lower gasoline and natural gas prices these days – a big help to the family budget – it is increasingly difficult to defend the oil and gas industry when it keeps polluting our treasured natural resources. 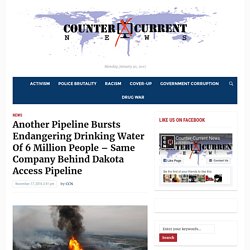 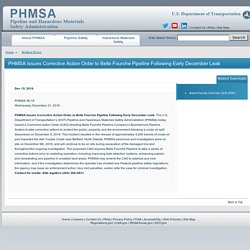 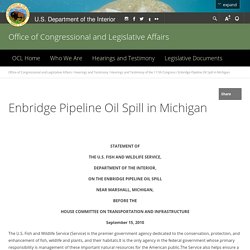 Fish and Wildlife Service (Service) is the premier government agency dedicated to the conservation, protection, and enhancement of fish, wildlife and plants, and their habitats.It is the only agency in the federal government whose primary responsibility is management of these important natural resources for the American public.The Service also helps ensure a healthy environment for people through its work benefiting wildlife and by providing opportunities for Americans to enjoy the outdoors and our shared natural heritage.The Service is responsible for implementing and enforcing some of our nation's most important environmental laws, such as the Endangered Species Act, Migratory Bird Treaty Act, the National Wildlife Refuge System Administration Act, and the Marine Mammal Protection Act.

MDHHS - Enbridge Oil Spill Activities and Reports. Oil Remaining in Surface Water and Overbank Areas MDCH evaluated the health risks for people coming into contact with the remaining oil at the bottom of the Kalamazoo River and Morrow Lake. 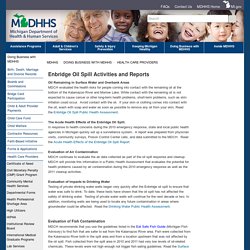 While contact with the remaining oil is not expected to cause cancer or other long-term health problems, short-term problems, such as skin irritation could occur. Avoid contact with the oil. If your skin or clothing comes into contact with the oil, wash with soap and water as soon as possible to remove any oil from your skin. Enbridge WI D. EPA Response to Enbridge Spill in Michigan. You are here: EPA Home EPA Response to Enbridge Spill in Michigan Questions and Answers Updated: July 18, 2011(Archived Questions and Answers from 2010) Health Wildlife and Livestock Response Health FAQs What do I do if I smell petroleum product odors? 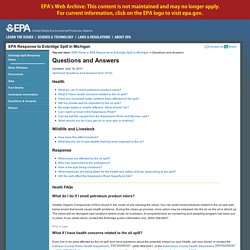 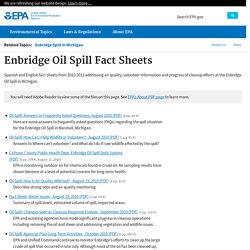 You will need Adobe Reader to view some of the files on this page. See EPA’s About PDF page to learn more. Oil Spill: Answers to Frequently Asked Questions, August 2010 (PDF)(4 pp, 44 K) Here are some answers to frequently asked questions (FAQs) regarding the spill situation for the Enbridge Oil Spill in Marshall, Michigan. Oil Spill: How Can I Help Wildlife or Volunteer? - August 2010 (PDF)(1 pg, 52 K) Answers to Where can I volunteer? USFWS: NRDAR 2010 Michigan Enbridge Oil Spill. Natural Resource Damage Assessment and Restoration Restoration Begins! 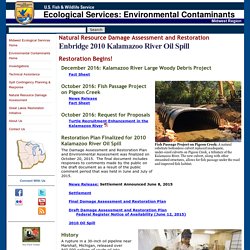 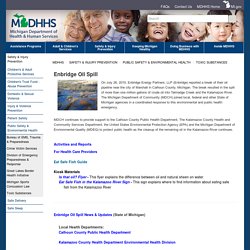 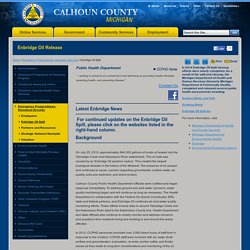 This oil leak was caused by an Enbridge Oil pipeline rupture. This created the largest ecological disaster in the history of the Midwest. The presence of oil caused, and continues to cause, concern regarding groundwater, surface water, air quality, soils and sediment, and direct contact. Calhoun County Public Health Department officials were notified and began response immediately.

To address ground and well water concerns, water quality monitoring began and will continue as long as necessary. In 2010, CCPHD personnel provided over 3,500 direct hours of staff time in response to the incident. A special thanks to all of the staff at the CCPHD for their dedication and leadership with this incident. MDHHS - Enbridge Oil Spill Activities and Reports. PAR1201. DEQ - Oil Spill Photos and Videos. Enbridge Accident Reports 9 2 10. Energy Transfer pipeline blowout in Texas. UPDATE 4-Sunoco oil pipeline leaks in Ohio nature preserve. Sunoco Pipeline Spills Gasoline Near Pennsylvania River. A pipeline breach on Friday spilled gasoline in the vicinity of the Susquehanna River in Lycoming County, Pennsylvania, environmental authorities said, prompting a utility firm to warn customers to reduce water use as a precaution. 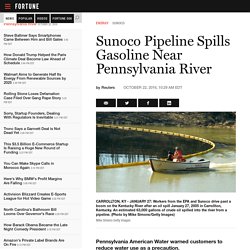 The breach occurred on a Sunoco Logistics Partners LP pipeline in the area of Gamble Township, around 100 miles (160 kms) north of Harrisburg, according to state authorities, who estimated the spill at about 1,300 barrels (55,000 gallons). The gasoline leaked into Wallis Run, a tributary of the Loyalsock Creek as a result of floods and landslides during heavy rainfall on Thursday night, the Pennsylvania Department of Environmental Protection (DEP) said in a statement. The Loyalsock Creek runs into the West Branch Susquehanna River around 15 miles (24 kms) south of where where the spill occurred. Bureau of Safety and Environmental Enforcement. 2011 Failure Investigation Report $4 million damages. North Battleford, Sask., prepares for possible arrival of spilled oil. Reservoirs and the water tower in North Battleford have been filled to capacity as a precautionary measure in the event oil from a major pipeline spill reaches the Saskatchewan city. Husky Energy says between 200,000 and 250,000 litres of crude oil and other material leaked into the North Saskatchewan River Thursday morning near Maidstone, Sask.

Husky Q2 loss overshadowed by pipeline spill (BNN Video) Efforts are being made by Husky to contain the spill through the use of booms across the river, about 40 kilometres upstream from North Battleford. Mayor Ian Hamilton says in the event any oil makes it through, the city’s water treatment plant, which draws its supply from the North Saskatchewan, will be shut down. But he says a ground water treatment plant is still available and officials are asking residents to slow the flow from their taps to help ensure an adequate supply.

Report Typo/Error. Crews dig up breached Husky pipeline, cause of oil leak still unknown. The Saskatchewan government says the breach that leaked up to 250,000 litres of oil and other material into a river earlier this month has finally been found, but word on what caused it will have to wait. Laurie Pushor, the deputy minister of the economy, says the section of the Husky Energy pipeline where the spill occurred into the North Saskatchewan River near Maidstone, Sask. on July 20 was dug up Friday. Pushor says the excavation has now stopped while plans are made to remove the 40-centimetre-wide section without causing a further release of crude oil. He says once it’s removed, it will be sent for testing. UPDATE 3-Exxon pipeline leaks thousands of barrels of Canadian oil in Arkansas. Rising-level-of-n-saskatchewan-river-to-put-hold-on-oil-spill-cleanup-1.

The Canadian Press Published Thursday, August 25, 2016 2:18PM EDT Last Updated Thursday, August 25, 2016 5:17PM EDT REGINA -- Cleanup of an oil spill along the North Saskatchewan River will be put on hold as water levels are expected to rise by up to two metres in the coming days, a provincial government spokesman said Thursday. Increased flows caused by unusually heavy rainfall west of Edmonton are making their way east. Peak levels at the Alberta-Saskatchewan boundary are expected late Friday or early Saturday. "Some cleanup activities will be temporarily discontinued. Some of the shoreline infrastructure -- things like some docks, launches and vehicle pads and booms -- are going to have to be removed from the area so that they don't get damaged with the high water," said Wes Kotyk with Saskatchewan's Environment Ministry.

"As soon as things start to stabilize and recede, the plan is to get right back to things as quickly as possible. " Trilogy oil emulsion spill in Alberta reaches size of four football fields. Trilogy Energy says the pipeline leak it discovered late last week in north central Alberta has covered an area about three hectares in size with oil emulsion — a damage zone equivalent to roughly four football fields.

In an update posted to its website late Tuesday, the Calgary−based oil and gas producer says it still doesn’t know the volume of the Oct. 6 spill into a marshland about 15 kilometres from Fox Creek, a small town of nearly 2,000 people located northwest of Edmonton. According to the statement, company president John Williams and other managers travelled to the remote scene Tuesday to meet with the cleanup team and assess the extent of the spill. The pipeline has been shut down and purged, and the source of the leak has been maintained. New Study Definitively Links Texas Earthquakes to Fracking and Drilling.

Since 2012, scientists have suspected that the earthquakes plaguing Texas and Oklahoma are results of wastewater injections from fracking and conventional drilling. And while they were relatively certain that the 2012 4.8 earthquake that rocked Eastern Texas was as a result of this phenomenon, they were still searching for definitive proof. Now, a new study published in Science provides evidence to the theory with the use of a technology called Interferometric Synthetic Aperture Radar (InSAR). [1] Wastewater injections happen as a result of fracking, when those drilling come across ancient ocean water that is too polluted to be used in any real way. Consequently, they push the water even further down into the ground, sometimes up to thousands of feet. Alberta to increase in- situ oilsands monitoring after study finds contaminants.

6 things you need to know about the Arkansas oil spill. A 2,500 Square-Mile Methane Plume Is Silently Hovering over Western US. A monstrous cloud of accumulated methane—a potent greenhouse gas—is now hovering over a large portion of the western United States according to satellite imagery analyzed by NASA and reported by the Washington Post. Created by years of intentionally released and errantly leaked natural gas during fossil fuel drilling operations, the cloud—invisible to the human eye but captured by advanced satellite imaging technology—is centered over northwest New Mexico and described by the Post as "a permanent, Delaware-sized methane cloud, so vast that scientists questioned their own data when they first studied it three years ago.

" An 8-year-old Falls Into One of Mexico’s Most Contaminated Rivers. 18 Days Later, He’s Dead. Where has all the Gulf spill oil gone? Report: Fracking Can Cause Earthquakes On Faults Tens Of Miles From Site. Chris CarringtonActivist Post. Oil spill reported from pipeline from Cushing, Okla. CUSHING, Okla., Oct. 24 (UPI) -- Local media in Oklahoma reported Monday a company was working to contain a release of crude oil from near the main U.S. oil storage hub in Cushing. News9, a CBS-affiliated television station in Cushing, Okla., reported a release from a pipeline controlled by the Seaway Pipeline Co. California Aquifers Contaminated With Billions Of Gallons of Fracking Wastewater. Mike G, DeSmogBlogWaking Times After California state regulators shut down 11 fracking wastewater injection wells last July over concerns that the wastewater might have contaminated aquifers used for drinking water and farm irrigation, the EPA ordered a report within 60 days.