BREAKING - DON'T BUY WALMART MILK - HUGE MOVE to WIPE OUT INDUSTRY. Patriot Act’s absurd new spawn: Just when you thought it couldn’t get any worse. Congress may be preparing to reinforce two horrible FISA Court decisions and an abusive government search with no debate in the coming weeks: a decision to give national security orders unlimited breadth, one making it legal for the government to investigate Americans for activities protected under the First Amendment, and the FBI’s “back door” searches of Americans’ communication content collected under the FISA Amendment Act Section 702 authority. 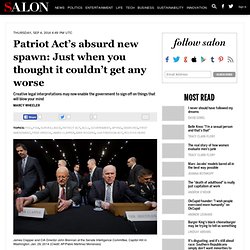 On Tuesday, the ACLU and the Department of Justice argued about the legality of the NSA’s phone dragnet program before the 2nd Circuit Court of Appeals in New York. Much of the discussion focused on the implications of the government’s theories that it can collect all phone records in the United States based on a claim they are “relevant” to standing terrorism investigations. The government’s claim with regards to past authorizations is terribly weak. But that won’t be true going forward. Ohio Earthquakes Directly Linked To Fracking. There's no shortage of complaints and fears about fracking. 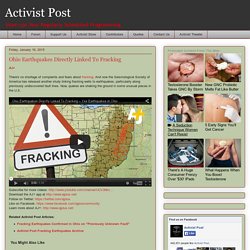 US is Preparing up to 5k Militants That Would Flee to ISIL. Tony CartalucciActivist Post Reported along the peripheries of the Western media, it was reported recently that some 3,000 so-called "moderate rebels" of the "Free Syrian Army" had defected to the "Islamic State" (ISIS). 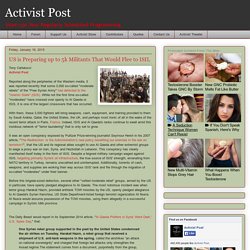 While not the first time so-called "moderates" have crossed over openly to Al Qaeda or ISIS, it is one of the largest crossovers that has occurred. With them, these 3,000 fighters will bring weapons, cash, equipment, and training provided to them by Saudi Arabia, Qatar, the United States, the UK, and perhaps most ironic of all in the wake of the recent terror attack in Paris, France. Indeed, ISIS and Al Qaeda's ranks continue to swell amid this insidious network of "terror laundering" that is only set to grow. D.A. Says Encrypted Phones May Make You a Terrorist Because They “Cannot Be Accessed by Law Enforcement” By Mac Slavo The attack on personal privacy continues. 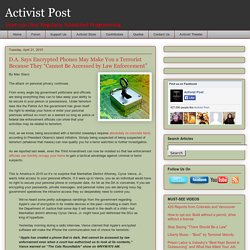 From every angle big government politicians and officials are doing everything they can to take away your ability to be secure in your person or possessions. Under terrorism laws like the Patriot Act the government has given itself the right to wiretap your home or enter your personal premises without so much as a warrant so long as police or federal law enforcement officials can show that your activities may be related to terrorism. And, as we know, being associated with a terrorist nowadays requires absolutely no concrete facts according to President Obama’s latest initiative. Simply being suspected of being suspected of terrorism (whatever that means) can now qualify you for a terror watchlist or further investigation. As we reported last week, even the Third Amendment can now be violated so that law enforcement officials can forcibly occupy your home to gain a tactical advantage against criminal or terror suspects.

Major U.S. Retailers Are Closing More Than 6,000 Stores. By Michael Snyder If the U.S. economy really is improving, then why are big U.S. retailers permanently shutting down thousands of stores? 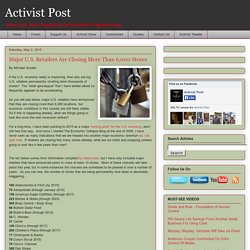 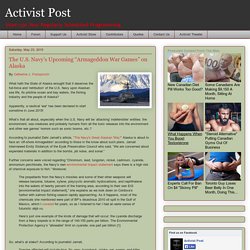 Frompovich What hath the State of Alaska wrought that it deserves the full-force and ‘retribution’ of the U.S. Navy upon Alaskan sea life, its pristine ocean and bay waters, the fishing industry and the people of Alaska? Radiation contamination discovered in fresh produce, dairy, meat, and fish. Artificial Intelligence Takes the Battlefield: Who Is Really Running Jade Helm 15? By Aaron and Melissa Dykes Who is really going to be running Jade Helm 15? 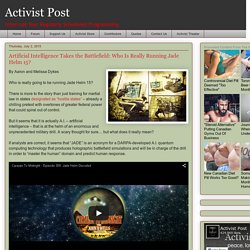 There is more to the story than just training for martial law in states designated as “hostile states” – already a chilling pretext with overtones of greater federal power that could spiral out of control. But it seems that it is actually A.I. – artificial intelligence – that is at the helm of an enormous and unprecedented military drill. A scary thought for sure… but what does it really mean? Police Killed More Americans In 2014 Than All U.S. Mass Shootings Combined.

By Amanda Warren With another recent mass shooting having taken place last week in Charleston, South Carolina - such a crisis is the perfect opportunity for the President to yet again stop just short of using the "C-word" - confiscation. 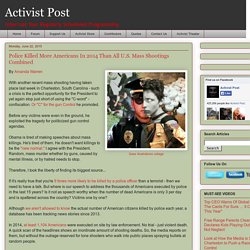 7 Key Events That Are Going to Happen by The End of September. Geologist Predicted EPA Would Intentionally Poison Animas River Week Before Toxic Spill. Subscribe and get Galactic News Daily Updates: 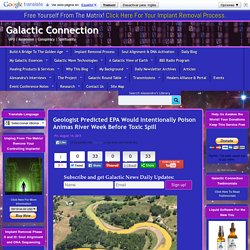