Infographic: How Tar Sands Oil Is Produced. 1391734946 acomparisonofthepropertiesofdilutedbitumencrudeswithotheroils. Spills of Diluted Bitumen from Pipelines: A Comparative Study of Environmental Fate, Effects, and Response. As Oil Sands Production Rises, What Should We Expect at Diluted Bitumen (Dilbit) Spills? JUNE 20, 2014 -- NOAA environmental scientist Jessica Winter has seen a lot of firsts in the past four years. 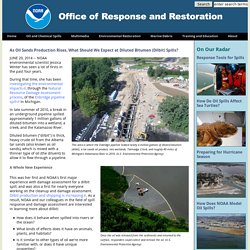 During that time, she has been investigating the environmental impacts, through the Natural Resource Damage Assessment process, of the Enbridge pipeline spill in Michigan. In late summer of 2010, a break in an underground pipeline spilled approximately 1 million gallons of diluted bitumen into a wetland, a creek, and the Kalamazoo River. Diluted bitumen ("dilbit") is thick, heavy crude oil from the Alberta tar sands (also known as oil sands), which is mixed with a thinner type of oil (the diluent) to allow it to flow through a pipeline. A Whole New Experience This was her first and NOAA's first major experience with damage assessment for a dilbit spill, and was also a first for nearly everyone working on the cleanup and damage assessment. How does it behave when spilled into rivers or the ocean?

TransCanada Corporation Blog. Crude oil is tested at TransCanada’s Keystone Hardisty Terminal to ensure it meets strict specifications before entering the Keystone Pipeline for transport to the United States. 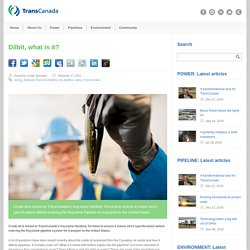 Crude oil is tested at TransCanada’s Keystone Hardisty Terminal to ensure it meets strict specifications before entering the Keystone pipeline system for transport to the United States. A lot of questions have been raised recently about the crude oil produced from the Canadian oil sands and how it affects pipelines. Is it really crude oil? What is it mixed with before it goes into the pipeline? Is it more corrosive or dangerous than conventional crude? Is it really crude oil? While every batch of crude oil has its own unique characteristics, they all must meet the specifications of the refineries that process crude oil into gasoline and other refined petroleum products. 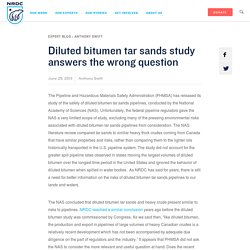 Unfortunately, the federal pipeline regulators gave the NAS a very limited scope of study, excluding many of the pressing environmental risks associated with diluted bitumen tar sands pipelines from consideration. The NAS literature review compared tar sands to similar heavy thick crudes coming from Canada that have similar properties and risks, rather than comparing them to the lighter oils historically transported in the U.S. pipeline system. The study did not account for the greater spill pipeline rates observed in states moving the largest volumes of diluted bitumen over the longest time period in the United States and ignored the behavior of diluted bitumen when spilled in water bodies.

It should be noted that Congress asked PHMSA for a much broader study. The Dilbit Disaster: Inside the Biggest Oil Spill You've Never Heard Of (Kindle Single), Elizabeth McGowan, Lisa Song, David Hasemyer, Catherine Mann, Ed Gaither, Susan White - Amazon.com. New Report: Tar Sands Industry Targets America’s Waterways. In a new report, NRDC examines the impact a suite of new tar sands oil infrastructure proposals could have on America’s coasts and rivers if they were built. 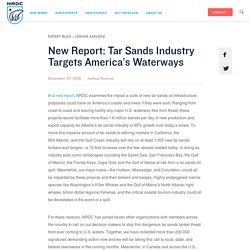 Ranging from coast to coast and leaving hardly any major U.S. waterway free from threat, these projects would facilitate more than 1.6 million barrels per day of new production and export capacity for Alberta’s tar sands industry or 60% growth over today’s levels. To move this massive amount of tar sands to refining markets in California, the Mid-Atlantic, and the Gulf Coast, industry will rely on at least 1,005 new tar sands tankers and barges—a 12-fold increase over the few vessels loaded today. In doing so, industry puts iconic landscapes including the Salish Sea, San Francisco Bay, the Gulf of Mexico, the Florida Keys, Cape Cod, and the Gulf of Maine at risk from a tar sands oil spill. Meanwhile, our major rivers—the Hudson, Mississippi, and Columbia—could all be impacted by these projects and their tankers and barges. Industry reports and publications. Modernizing the energy board is among the recommendations the Senate Committee on Transport and Communications has made in its interim report called Pipelines for Oil: Protecting our economy, respecting our environment. 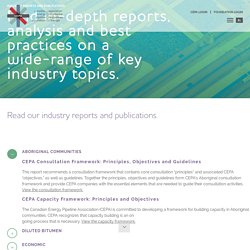 The committee is formulating a strategy to facilitate the transport of crude oil to Canada’s east and west coasts to reduce Canada’s dependence on foreign oil and to open up access to more lucrative global markets. Read the complete report. The Canadian pipeline industry is facing a number of talent challenges over the coming years – an aging workforce, an evolving diversified skill and capability pool and various macro-economic shifts and uncertainties, such as volatile energy prices and evolving government policy.

Based on these challenges, there is an increasing need to better understand how this changing landscape will affect the skill-sets and expertise required both now and in the future within the pipeline industry. Pipeline Inspector Certification Program. CEPA Diluted Bitumen3. A Dilbit Primer: How It's Different from Conventional Oil. Diluted Bitumen.