Inkitt - The Reader-Powered Book Publisher. 9 Easily Preventable Mistakes Writers Make with Dialogue. Place & Location. Location – notes Much as a place can elicit the greatest mystery and contemplation, or even dread and anxiety, place prompts story-telling. 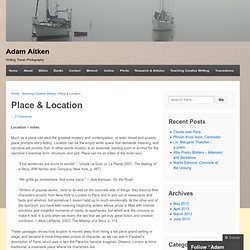 Location can be the empty white space that demands meaning, and narrative will provide that: in other words location is an essential starting point or anchor for the narrative’s eventual form, structure, and plot. Place can be an index of the inner soul. “First sentences are doors to worlds” - Ursula Le Guin (in La Plante 2007, The Making of a Story, WW Norton and Company, New York, p. 467) “We gotta go somewhere, find some place.” – Jack Kerouac, On the Road.

Six Easy Tips for Self-Editing Your Fiction. There are a lot of hurdles to writing great fiction, which is why it's always important to keep reading and writing. 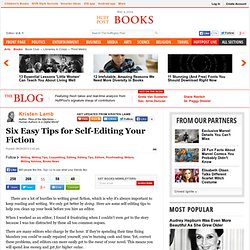 We only get better by doing. One Simple and Incredibly Painful Way to Fix Your Novel Draft. How to Write a Character From Start to Finish. The best fiction is about a character who changes in some significant way. 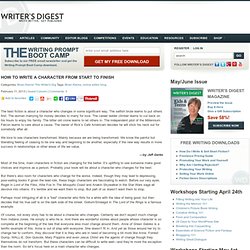 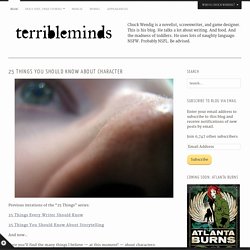 Anne Tyler’s Tips on Writing Strong (yet Flawed) Characters. Anne Tyler belongs to a disappearing generation of writers, those who came into their own in an era when it was more than enough to—well, to simply write. 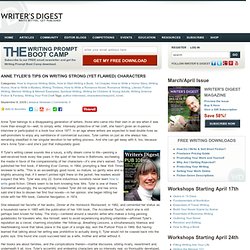 Intensely protective of her craft, she hasn’t given an in-person interview or participated in a book tour since 1977. In an age where writers are expected to lead double lives as self-promoters to enjoy any semblance of commercial success, Tyler carries on just as she always has, remaining steadfast in her singular devotion to her writing process. And she can get away with it, too, because she’s Anne Tyler—and she’s just that indisputably good. If Tyler’s writing career sounds like a luxury, a lofty dream come to life—penning a well-received book every few years in the quiet of her home in Baltimore, eschewing the media in favor of the companionship of her characters—it’s one she’s earned.

Her books are about families, and the complications therein—marital discourse, sibling rivalry, resentment and, underneath it all, love. Character Chart for Fiction Writers - EpiGuide.com - StumbleUpon. If you're a fiction writer -- whether you're working on a novel, short story, screenplay, television series, play, web series, webserial, or blog-based fiction -- your characters should come alive for your reader or audience. The highly detailed chart below will help writers develop fictional characters who are believable, captivating, and unique.

Print this page to complete the form for each main character you create. IMPORTANT: Note that all fields are optional and should be used simply as a guide; character charts should inspire you to think about your character in new ways, rather than constrain your writing. Fill in only as much info as you choose. Keeping it Real: A Rough Guide to Using Real People As Fictional Characters. Pop quiz: what do Ebeneezer Scrooge, Alice in Wonderland and Tintin all have in common? 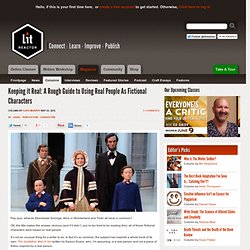 OK, the title makes the answer obvious (and if it didn’t, you’re too tired to be reading this): all of these ‘fictional’ characters were based on real people. It’s not an unusual thing for a writer to do. In fact it’s so common, the subject has inspired a whole book of its own: The Godfather Was A Girl written by Eamon Evans, who, I’m assuming, is a real person and not a piece of fiction inspired by a real person. Plotto: The Master Book of All Plots. By Michelle Legro The art of mechanized storytelling, or what a cardboard robot has to do with melodrama and Law & Order. 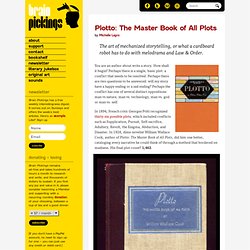 You are an author about write a story. How shall it begin? Perhaps there is a single, basic plot: a conflict that needs to be resolved. TEN SIMPLE KEYS TO PLOT STRUCTURE. Structure is something that every agent and executive in Hollywood talks about, and that all of us teachers/authors/consultants/gurus/whatever go on and on about, to the point that it can seem complicated, intricate, mysterious and hard to master. 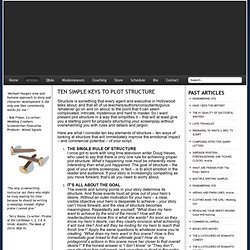 So I want present plot structure in a way that simplifies it – that will at least give you a starting point for properly structuring your screenplay without overwhelming you with rules and details and jargon. Here are what I consider ten key elements of structure – ten ways of looking at structure that will immediately improve the emotional impact – and commercial potential – of your script. Structuring Your Story’s Scenes, Pt. 8: Options for Reactions in a Sequel. At the heart of every sequel* is the narrating character’s reaction to the preceding scene’s disaster. 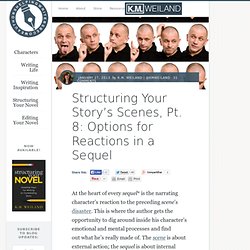 This is where the author gets the opportunity to dig around inside his character’s emotional and mental processes and find out what he’s really made of. The scene is about external action; the sequel is about internal reaction. The sequel will sometimes be entirely confined to the POV character’s mind; other times, it will be dramatized through action or dialogue. Although the sequel possesses three basic and unavoidable parts, just like the scene, it is much more flexible in execution.

100 Exquisite Adjectives. By Mark Nichol Adjectives — descriptive words that modify nouns — often come under fire for their cluttering quality, but often it’s quality, not quantity, that is the issue.

Plenty of tired adjectives are available to spoil a good sentence, but when you find just the right word for the job, enrichment ensues. Practice precision when you select words. Ali Smith: Style vs content? Novelists should approach their art with an eye to what the story asks. Point 1: "What's it all about? " v "What's it all – a bout? " Fight! Fight! Fight! In the style corner, a battered old copy of Ulysses. The Passive Voice. Narrative Tenses for Fiction. Resources For Children's Writers. Culture - Michael Morpurgo on how to write for children. Michael Morpurgo is one of England’s best-loved children’s writers. He discusses his fascination with historical subjects and how he writes for children with Razia Iqbal. Michael Morpurgo has written over 100 books, the most famous of which,War Horse (1982), has since become an award-winning and hugely successful stage play. It was adapted into a feature film by Steven Spielberg in 2011.

Online Writing Lab (OWL) The Inner Struggle: Guides for Using Inner Conflict That Make Sense. By Janice Hardy, @Janice_Hardy I sat in on an amazing workshop while I was at RWA that made something typically vague very clear and applicable. Michael Hague's Using Inner Conflict to Create Powerful Love Stories.

It was one of those workshops that discussed what I already knew, but Hague presented it in such a way that I clearly saw a super easy way to apply inner journeys to my stories. While the workshop was about romance specifically, the pieces of Hague’s inner conflict really work for any character journey. He calls the overall arc the “journey from living in fear to living courageously.” 100 Character Development Questions for Writers. Physical Descriptions - List of Hair Colors. Hair Color List (Note: an updated and expanded version of this list appears in my 15K-word book How to Describe Hair and Skin. Character Flaw Index. To make characters realistic and relatable they are given flaws, because if there is anything a writer can be sure of it is that no one in their audience will be perfect.

Flaws are character traits that have a negative impact in the narrative, unless they are simply informed. Character Archetypes. Character Qualities. Medieval Names - List of Medieval Names. Online Book Writing Tools. Spinner of Yarns, Weaver of Wonders and our Guide to the imaginary realms and vibrant characters of your stories. Writing App - Creative Writing Software - Milanote. Plotto: The Master Book of All Plots.

TEN SIMPLE KEYS TO PLOT STRUCTURE. Structuring Your Story’s Scenes, Pt. 8: Options for Reactions in a Sequel. Keeping it Real: A Rough Guide to Using Real People As Fictional Characters. Character Chart for Fiction Writers - EpiGuide.com - StumbleUpon. Anne Tyler’s Tips on Writing Strong (yet Flawed) Characters. 25 Things You Should Know About Character. How to Write a Character From Start to Finish. Set up Your Story in the First Paragraphs. By Jodie Renner, editor, author, speaker I receive several first chapters (and synopses) every week as submissions for possible editing, and I always read the first page. Some are clear and compelling and make me want to read more.

But too often, two main problems emerge: Either the author spends too much time revving his engine with description or backstory before we even care (boring); or we’re plunged right into the story but have no idea where we are or what’s going on (confusing). There are three cardinal rules of successful novelists: 1. 2. 3. I’ve discussed the negative effects of starting off too slowly, with too much description and/or backstory, in other articles (see the links at the end of this article). This Itch of Writing: Psychic Distance: what it is and how to use it.

Psychic Distance is a concept which John Gardner explores in his book The Art of Fiction, and I think it's absolutely crucial, not difficult to understand, and not nearly talked about enough. You'll also find it called Narrative Distance because, basically, it's about where the narrative (and therefore the reader) stands, relative to a character. 9 Easily Preventable Mistakes Writers Make with Dialogue.

20 Great Writers on the Art of Revision. It’s a new year, and hopeful souls around the world are working diligently on their plans to revise — their health, their attitudes, their lives. But who knows more about the art of revision than great writers? Sure, they mostly know about rewriting their own work, and they may not always have applied the principles to their daily habits, but that doesn’t mean we can’t try. One Simple and Incredibly Painful Way to Fix Your Novel Draft. Cormac McCarthy’s Blood Meridian: Early drafts and history. Photo by Nerissa Escanlar.

Bloodless dawn. The old cowboy sets out across the sharp-footed malpías toward the volcanic cone. On his pack, below the antique swivel-bore rifle, swing two small pouches of crystal saltpeter and ground alder charcoal like the cheap curio of a traveling tinker. Six Easy Tips for Self-Editing Your Fiction. 20 Great Writers on the Art of Revision. One Simple and Incredibly Painful Way to Fix Your Novel Draft.

Six Easy Tips for Self-Editing Your Fiction. True or False? Pay Attention to Structure to Tell if a Story is Made Up. Set up Your Story in the First Paragraphs. Place & Location. Writing Style. Creative Writing. Personality Types. Untitled. How to Write a Character From Start to Finish. Voice. Character is the very life of fiction. Setting... Keeping it Real: A Rough Guide to Using Real People As Fictional Characters. Character Chart for Fiction Writers - EpiGuide.com - StumbleUpon. Anne Tyler’s Tips on Writing Strong (yet Flawed) Characters.