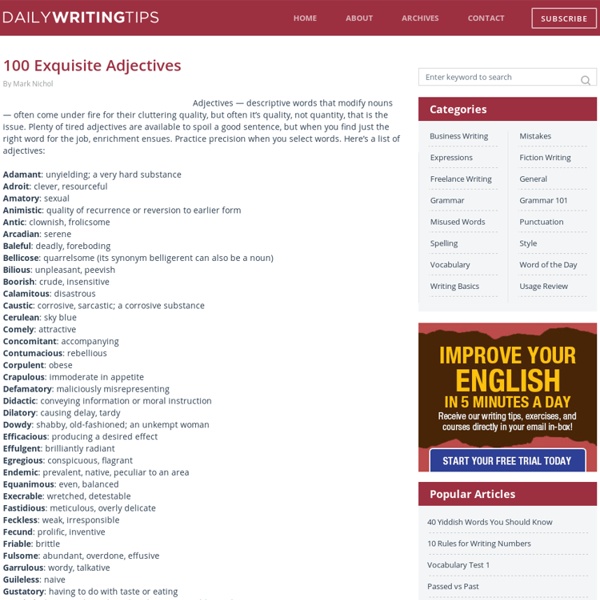 By Mark Nichol Adjectives — descriptive words that modify nouns — often come under fire for their cluttering quality, but often it’s quality, not quantity, that is the issue. Plenty of tired adjectives are available to spoil a good sentence, but when you find just the right word for the job, enrichment ensues. Practice precision when you select words. Here’s a list of adjectives: Subscribe to Receive our Articles and Exercises via Email You will improve your English in only 5 minutes per day, guaranteed! 21 Responses to “100 Exquisite Adjectives” Rebecca Fantastic list!

18 Common Words That You Should Replace in Your Writing It’s a familiar scene: you’re slumped over your keyboard or notebook, obsessing over your character. While we tend to agonize over everything from structure to backstory, it’s important to weigh how you write something too. A perfectly constructed world is flat on the page if you use feeble, common words. When you’re finished constructing your perfectly balanced world, do your writing a favor and take another pass to weed out these 18 haggard words. How to Write with Style: Kurt Vonnegut’s 8 Keys to the Power of the Written Word Find a Subject You Care About Find a subject you care about and which you in your heart feel others should care about. It is this genuine caring, and not your games with language, which will be the most compelling and seductive element in your style. I am not urging you to write a novel, by the way — although I would not be sorry if you wrote one, provided you genuinely cared about something. A petition to the mayor about a pothole in front of your house or a love letter to the girl next door will do.

100 Mostly Small But Expressive Interjections David Bier Thanks for this – what a fun post considering there’s no actual narrative in it! Cecily Some of these interjections are quite culturally and age specific, so if people need to be told what they mean, they should probably not be using them.For example, to many Brits, va-va-voom is not old-fashioned at all, but instead is firmly linked to the long-running ads that footballer Thierry Henry made for the Renault Clio. Himanshu Chanda Whoa ! List of forms of word play This is a list of techniques used in word play with Wikipedia articles. Techniques that involve the phonetic values of words Mondegreen: a mishearing (usually unintentional) ase as a homophone or near-homophone that has as a result acquired a new meaning. The term is often used to refer specifically to mishearings of song lyrics (cf. soramimi).Onomatopoeia: a word or a grouping of words that imitates the sound it is describingRhyme: a repetition of identical or similar sounds in two or more different words Alliteration: matching consonants sounds at the beginning of wordsAssonance: matching vowel soundsConsonance: matching consonant soundsHolorime: a rhyme that encompasses an entire line or phraseSpoonerism: a switch of two sounds in two different words (cf. sananmuunnos)Janusism: the use of phonetics to create a humorous word (e.g. GAYsha from Geisha)) Techniques that involve semantics and the choosing of words

Data Mining Novels Reveals the Six Basic Emotional Arcs of Storytelling Back in 1995, Kurt Vonnegut gave a lecture in which he described his theory about the shapes of stories. In the process, he plotted several examples on a blackboard. “There is no reason why the simple shapes of stories can’t be fed into computers,” he said. “They are beautiful shapes.” 50 Obscure English Words to Impress Your Friends According to the Global Language Monitor, English has more than 1,000,000 words (although even large dictionaries tend to contain about a third or a fourth), more than any other language spoken on Earth (that's more than thrice the amount of words in Spanish alone, another leading language in amount of words). Yet, most people only know 5,000 - 6,000! Of course, often, not much more than that is needed; English has an incredible amount of words with the exact same meaning.

How To Stop Absorbing Other People’s Negative Energy By Jesse Herman and Steven Bancarz| Empathy is the ability to recognize and feel other peoples emotions. Sympathy is feeling compassion for other people. Often times to be an “empath” means that you are absorbing much of the pain and suffering in your environment, which can sacrifice your won ability to function at a high level. If you have every been in a room with a negative person, you know just how toxic their energy can be. Learning to stop absorbing other people’s energies is such a great spiritual skill to have. Here are five ways to stop absorbing other people’s energy. Kids explain how banned and challenged books helped them and even saved their lives / Boing Boing By Joan Bertin and Millie Davis Banned Books Week has come and gone but we can be sure of one thing: the coming year will be marked by challenges to the same kinds of books that were controversial this year, and in years past. report this ad Controversies over what books are taught in class or shelved in the school library typically start when an adult—usually a parent or community member—feels that a book selected by teachers and librarians is inappropriate, offensive or objectionable. Most often, the objections relate to sexual scenes, offensive language, or depictions of drug and alcohol use.

Unusual Words Unusual Words A by no means exhaustive list of rare, obscure, strange and sometimes funny words and their meanings that only seem to crop up in crosswords and dictionaries. Words that are used so seldom, you wonder who invented them and why. Home ~ The Stories ~ Diversions ~ Links ~ Contact

Gr8 pearl, I picked it, thanks! by topoletta Nov 4