Black America Needs Fathers. 5 Spooky Facts about Power and Inequality You Probably Didn’t Know. What better way to get in the Halloween spirit than a spine-chilling binge of the viral Two Sentence Horror Stories on Netflix? 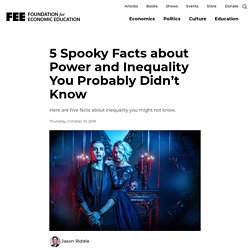 If you still don’t get your fill, you can head over to Reddit for more “bite-sized scares.” Two of the most outspoken critics of economic inequality look like they’ve been working up their own scary #TwoSentenceHorrorStories leading up to Halloween: Power, money, influence—inequality is a frightening concern for many people.

Possible Solutions to Poverty. Poverty and Africa. AOC’s Marxist Labor Theory Was Debunked by Economists Decades Ago. Study: The Poverty Rate in Canada Is 0.9% for People Who Do These Three Things. HumanProgress. On January 29, The Guardian ran a column that sparked an interesting debate on two continents. 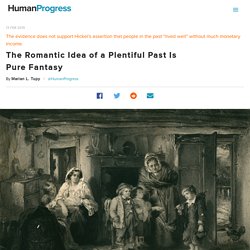 Jason Hickel from the University of London rejected the generally-accepted estimate of reduction in absolute poverty “from 94 percent in 1820 to only 10 percent today.” In “Bill Gates says poverty is decreasing. He couldn’t be more wrong,” Hickel critiqued academics, like Max Roser from Oxford University and Steven Pinker from Harvard University, journalists, like Nick Kristof from The New York Times and philanthropists, like Bill Gates, for suggesting that “global extension of free-market capitalism has been great for everyone.”

FEE’s Essential Guide to Poverty and Inequality. This guide serves as an introduction to the issues surrounding inequality and poverty, and addresses many of the economic policies that effectively prevent those affected from making progress and escaping the cycle of poverty. 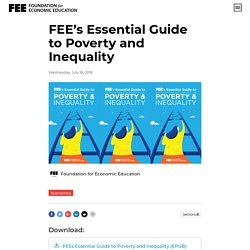 Here we cover subjects like the slowing of economic growth, how and why mass schooling is used as a tool for social control, and the controversy regarding raising the minimum wage, as well as other pertinent issues. Poverty, Inc. We have met the 1%, and he is us. Guest Post by Willis Eschenbach In explanation of my title, I fear I’ll have to go on a bit of a digression. 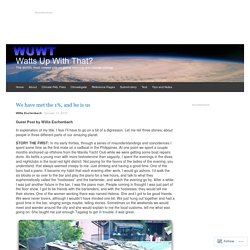 Let me tell three stories, about people in three different parts of our amazing planet. STORY THE FIRST: In my early thirties, through a series of misunderstandings and coincidences I spent some time as the first mate on a sailboat in the Philippines. At one point we spent a couple months anchored up offshore from the Manila Yacht Club while we were getting some boat repairs done. As befits a young man with more testosterone than sagacity, I spent the evenings in the dives and nightclubs in the local red light district. Figure 1. During this time, Helena kept telling me that I was rich. Dead Wrong® with Johan Norberg - Global Inequality - Rising or Falling? These Maps Reveal the Secret World of Modern Slavery. Tens of millions of people are in slavery around the world, and lots of them live in your country. 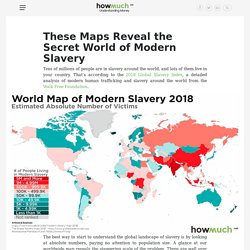 That’s according to the 2018 Global Slavery Index, a detailed analysis of modern human trafficking and slavery around the world from the Walk Free Foundation. The best way to start to understand the global landscape of slavery is by looking at absolute numbers, paying no attention to population size. A glance at our worldwide map reveals the staggering scale of the problem. There are well over 40M people in slavery around the world. Our color-coded approach lets you easily see how the vast majority of human slavery, measured in overall terms, occurs in places like Southeast Asia, India, China, Russia and a few countries in Africa, like Mauritania and South Sudan. The Results of NYC’s $15 Minimum Wage Are Already In—And They’re Not Good. Andrew Coyne: Maybe now we can finally say it out loud — poverty is in decline. 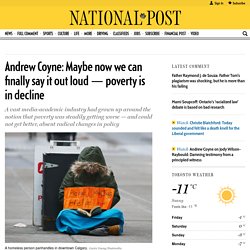 Can I let you in on a little secret? Keep it under your hat, but — the poverty rate has fallen again. In fact, it’s at a new all-time low. Statistics Canada reports that the percentage of Canadians falling below the official poverty line in 2017 fell to 9.5 per cent, down from 15.6 per cent in 2006. That still leaves much room for improvement. The undue alarmism over America's wealth inequality 'crisis' At least the fantastical Green New Deal attempts to address an actual problem: climate change. 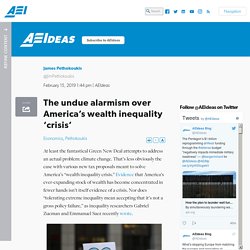 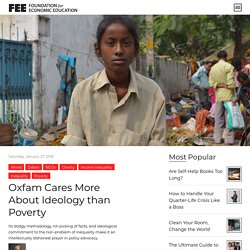 In the report, Oxfam not only regurgitates all the same economic fallacies we’re used to — chief among them, the labor theory of value and the notion that wealth inequality is a problem to be solved — but it goes on to make dangerous and authoritarian recommendations to governments on how they should respond to this supposed “inequality crisis.” It has been repeated over and over again, but seemingly to no avail: Poverty, not inequality, is the problem. Inequality is something that comes about naturally, as a result of different skills, desires, and circumstances. Where it is induced by force or fraud, it is usually manifested in destitution rather than a mere absence of parity.

Inequality even comes about when everyone is getting richer. Progressivism: Riches For The Top Guys, Disaster For Those At The Bottom — Manhattan Contrarian. I love listening to people of the Left -- people like Bernie Sanders, Hillary Clinton, Bill de Blasio, and their international counterparts like Chavez and Maduro of Venezuela, Rousseff and da Silva of Brazil, the Castros of Cuba, or many others -- as they talk about the terrible income inequality under capitalism and the perfect justice and fairness soon to be achieved through government-enforced redistribution programs (run by them, of course). 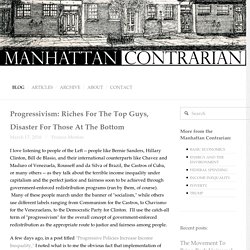 Many of these people march under the banner of "socialism," while others use different labels ranging from Communism for the Castros, to Chavismo for the Venezuelans, to the Democratic Party for Clinton. Jesus on Wealth Redistribution: What He Said and Didn't Say.