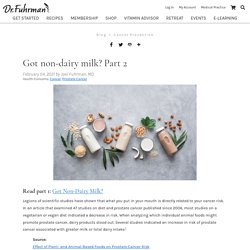 Legions of scientific studies have shown that what you put in your mouth is directly related to your cancer risk. In an article that examined 47 studies on diet and prostate cancer published since 2006, most studies on a vegetarian or vegan diet indicated a decrease in risk. When analyzing which individual animal foods might promote prostate cancer, dairy products stood out. Got Non-Dairy Milk? Got milk? 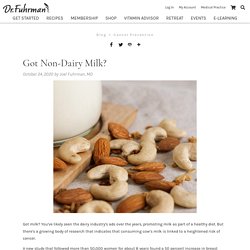 You’ve likely seen the dairy industry’s ads over the years, promoting milk as part of a healthy diet. But there’s a growing body of research that indicates that consuming cow’s milk is linked to a heightened risk of cancer. A new study that followed more than 50,000 women for about 8 years found a 50 percent increase in breast cancer risk in women who consumed the largest amounts of cow’s milk, compared to those who consumed the least.1 Source:Dairy, soy, and risk of breast cancer: those confounded milks New study suggests dairy increases breast cancer risk The new research was part of the Adventist Health Study-2 (AHS-2) and followed over 50,000 women for about 8 years.

These results were driven primarily by postmenopausal breast cancer, and the results were similar for full-fat and reduced fat milks. Cashew Milk & Pecan Milk Recipes: Good For You or Worse? Since the Central Valley of California is responsible for nearly 80% of the world’s almond crop, when the drought hit high gear a few years back, plant-based milk manufacturers were left scrambling for soy-free alternatives. 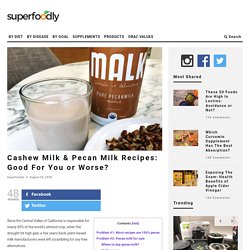 Peanut milk wasn’t a viable option. While not a nut, this underground-growing legume could work, but too many are scared of peanuts due to fear of an allergy (and often it’s without merit). Macadamia could create delicious creaminess, but it’s high calorie and there’s limited supply. Cashew turned out to be the best option. The big brands like Silk and So Delicious have launched several products for that nut, including creamer and ice cream. You will understand why it might be the worst dairy free milk in just a moment. Ultimate Guide to Non-Dairy Milks. Some people just don’t do milk. 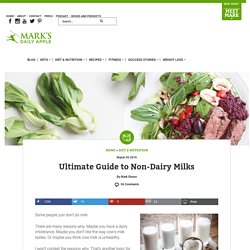 There are many reasons why. Maybe you have a dairy intolerance. Maybe you don’t like the way cow’s milk tastes. Or maybe you think cow milk is unhealthy. I won’t contest the reasons why. But the fact is, lots of people either need or want a milk alternative. Normally in a post like this, I’d cover all the different varieties and what sets each apart—their strengths and weaknesses, their nutrient profiles, their unhealthy ingredients. The good news is that there are plenty of good choices available. The bad news is that most non-dairy milks are usually very low in nutrients. This isn’t surprising when you think about how nut milks are made: by blending the nuts with a bunch of water and straining out the solids to try to extract some of the nut-ness. To illustrate this, let’s look at the most popular non-dairy milks and compare the nutrients in the parent nut/seed/plant to the nutrients in the nut/seed/plant-milk (when applicable). High Protein Vegan Milk Review: Ripple, Good Karma & Orgain.

While the exact numbers vary slightly by production method, according to the USDA, your average one cup (8 oz) serving of cow’s milk clocks in at 102 calories and 8 grams of protein. 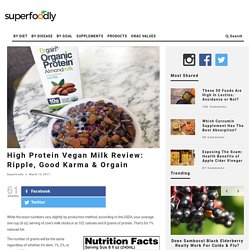 That’s for 1% reduced fat. The number of grams will be the same regardless of whether it’s skim, 1%, 2%, or whole 3.25%. Sounds great, but what isn’t are the adverse health effects of dairy. Specific to the protein content is the fact that 80% is casein and 20% is whey. The latter is considered great for bodybuilding, even though farts from protein supplements seem to be guaranteed with that particular type. Casein is not popular a supplemental source nor should it be. Not to mention the cholesterol in dairy milk, versus the vegan replacements which contain absolutely zero. The health benefits of plant based are something you already know. Again, we emphasize the word processed. Depending on whether it’s unsweetened or sweetened, each serving is 35 to 70 calories, some even higher.

Is Hemp Milk Good For You? Nutrition vs. Almond & Cow Milk. We already have demonstrated how hemp water is a huge waste of money. 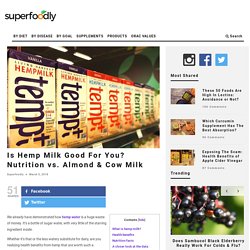 It’s a bottle of sugar water, with very little of the starring ingredient inside. Whether it’s that or the less watery substitute for dairy, are you realizing health benefits from hemp that are worth such a premium? Probably not. At least if you’re buying the premade stuff from Tempt, Pacific, and similar brands. Coconut Milk: This Is Your Comprehensive Guide. Store-Bought Almond Milk: Why You Should Stop Buying It and How To Make Your Own.