Where is your fat accumulating? Different fat distribution is linked to different cardiometabolic risk in a sex-dependent manner. Wikimedia Commons It’s no surprise that men and women have different body compositions, with men typically accumulating fat in the abdomen – the classic apple-shaped body type – and women having a pear-shape body type, with more lower extremity fat mass. 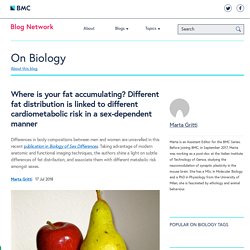 But can those differences impact on the health of men and women in a differential way? Although men and women are both susceptible to obesity, the health consequences are often different between the sexes, even when other factors, such as total fat mass or body mass index (BMI) are similar. This observation led the authors of this recent publication of Biology of Sex Differences to consider those classic indicators, such as the BMI and total fat mass, not sensitive enough to ensure a proper understanding of the metabolic risk between men and women. With a little planning, vegan diets can be a healthful choice. Personalized Nutrition: The Latest on DNA-Based Diets. Several of you have written asking me to revisit the subject of nutrigenomics, which is the attempt to use genetic testing as a way to steer dietary recommendations. 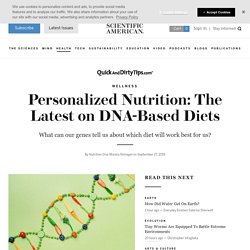 Nutrition Diva listener Brad writes: You did an episode on DNA-based diets in 2012 (episode 203). I know the genetics field is changing very quickly and I was hoping you could revisit this subject. Some of the companies who do the testing also sell specific supplements based on your results, which seems a little suspcious. What is the state of the art? Controversial red meat study causes division among scientists. A series of five systematic reviews published in the journal Annals of Internal Medicine is suggesting there is little to no evidence that moderate consumption of red or processed meat significantly increases risk of heart disease, diabetes, or cancer. 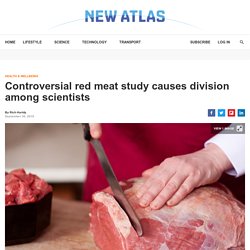 The research contradicts many general nutritional recommendations, with some scientists explicitly calling the new conclusions “irresponsible and unethical”. The new research consisted of five separate metastudies, looking at a large number of randomized controlled trials and observational studies investigating the correlation between red and processed meat consumption, and various health outcomes. A panel of 14 experts was subsequently convened to examine all five reviews, and offer overall recommendations for red meat consumption. Eat Less Red Meat, Scientists Said. Now Some Believe That Was Bad Advice. Public health officials for years have urged Americans to limit consumption of red meat and processed meats because of concerns that these foods are linked to heart disease, cancer and other ills. 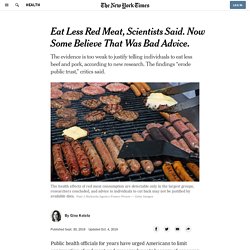 But on Monday, in a remarkable turnabout, an international collaboration of researchers produced a series of analyses concluding that the advice, a bedrock of almost all dietary guidelines, is not backed by good scientific evidence. If there are health benefits from eating less beef and pork, they are small, the researchers concluded. Controversial red meat study causes division among scientists. As zero-calorie natural sweeteners such as stevia surge in popularity, here’s what you need to know. Associations of Dietary Cholesterol or Egg Consumption With Incident Cardiovascular Disease and Mortality. We have detected that you are using an Ad Blocker. 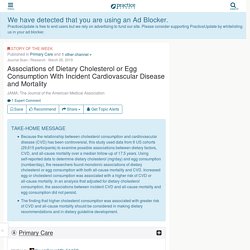 PracticeUpdate is free to end users but we rely on advertising to fund our site. Please consider supporting PracticeUpdate by whitelisting us in your ad blocker. We have sent a message to the email address you have provided, . If this email is not correct, please update your settings with your correct address. The email address you provided during registration, , does not appear to be valid. Please provide your AHPRA Number to ensure that you are given the correct level of access to our site. Artificially Sweetened Beverages, Stroke, and Dementia. We have detected that you are using an Ad Blocker. 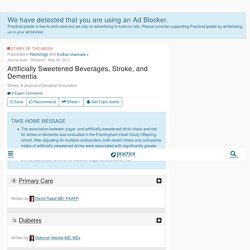 PracticeUpdate is free to end users but we rely on advertising to fund our site. Please consider supporting PracticeUpdate by whitelisting us in your ad blocker. We have sent a message to the email address you have provided, . What we know about diet soda's connection to heart disease, stroke, and early death. Since the introduction of Diet Coke in 1982, artificially sweetened drinks have become increasingly ubiquitous in the American diet. 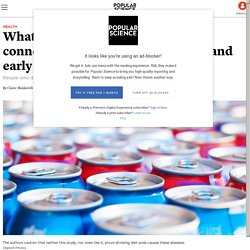 In fact, according to a 2018 consumer survey, more than half of all Americans age 18 to 49 drank at least one Diet Coke at some point in the past four weeks. So it's hardly surprising that epidemiologists are studying the effects the zero-calorie sweeteners have on our health. The most recent study, published this week in the journal Stroke, drew conclusions that sound worrying: In postmenopausal women, drinking two or more of these beverages a day were linked to an earlier risk of stroke, heart disease, and early death. The study collected diet and health information from more than 80,000 women between the ages of 50 and 79 as part of the Women’s Health Initiative, a longitudinal health study created in 1991 by the National Institutes of Health. 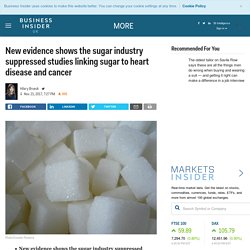 The Sugar Research Foundation, the group funding the studies, cut the project short and didn't publish the results. Nutritionists caution that sugar, not fat, is largely to blame for many of the problems in our modern diets. For decades, sugar lobbyists have been taking aim at studies linking sugar and cancer. 5 popular claims about coconut oil broken down by science. How to Follow the Mediterranean Diet for Senior Health.

Fat, fructose and calories: 5 nutrition ‘facts’ we used to believe. A friend of mine is trying to lose weight and wanted to check whether her strategies were sound. 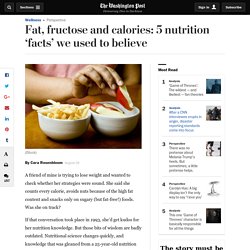 She said she counts every calorie, avoids nuts because of the high fat content and snacks only on sugary (but fat-free!) Foods.

How to Know Whether to Believe a Health Study. Photo Every day, new health care research findings are reported. 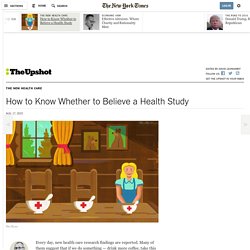 Many of them suggest that if we do something — drink more coffee, take this drug, get that surgery or put in this policy — we will have better (or worse) health, or longer (or shorter) lives. And every time you read such news, you are undoubtedly left asking: Should I believe this? Often the answer is no, but we may not know how to distinguish the research duds from the results we should heed. Low fat? Low carb? Almost any healthy diet can work for losing weight. Yesterday’s nutrition headline was “low-carb, not low-fat, diet linked with increased weight loss.” Today it’s “no clear winner among popular diets.”

The diet controversy continues. For years, low-fat diets were the ones that doctors recommended for weight loss. Is Something Wrong with Our Modern Diet? By Dr. Mercola Three decades ago, the food available was mostly fresh and grown locally. The Food Journal and Food, Nutrition & Science. Sustainability Series: Focus on the Fight Against Obesity with Coca-Cola Established in 1886, The Coca-Cola Company is the world’s largest beverage company offering more than 500 sparkling and still brands that include Coca-Cola®, Diet Coke®, Fanta®, Sprite®, Coca-Cola Zero™, vitaminwater®, POWERADE®, Minute Maid® and Georgia™ Coffee. Consumers in more…What is “Sustainable” Beef? In a recent episode of the TV hit sitcom Modern Family, one of the main character’s neighbors scolded him for being less than “green.