APA Board Issues Apology for History of Racism. Can Gambling Machines Prevent Addiction? Forget the simple nickel slots of yesteryear. 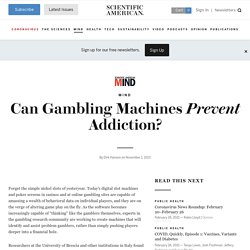 Today's digital slot machines and poker screens in casinos and at online gambling sites are capable of amassing a wealth of behavioral data on individual players, and they are on the verge of altering game play on the fly. As the software becomes increasingly capable of “thinking” like the gamblers themselves, experts in the gambling research community are working to create machines that will identify and assist problem gamblers, rather than simply pushing players deeper into a financial hole. From Privileges to Rights: People Labeled with Psychiatric Disabilities Speak for Themselves. National Council on DisabilityJanuary 20, 2000 This report is also available in braille and large print, on diskette and audiocassette, and on the Internet at the National Council on Disability's award-winning Web page (/newsroom/publications/publications.htm). 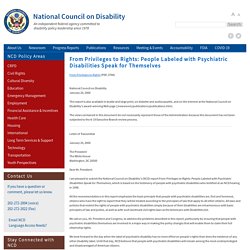 The views contained in this document do not necessarily represent those of the Administration because this document has not been subjected to the A-19 Executive Branch review process. Letter of Transmittal January 20, 2000 The PresidentThe White HouseWashington, DC 20500 Dear Mr. I am pleased to submit the National Council on Disability's (NCD) report From Privileges to Rights: People Labeled with Psychiatric Disabilities Speak for Themselves, which is based on the testimony of people with psychiatric disabilities who testified at an NCD hearing in 1998. We call on you, Mr. We look forward to the day when the label of psychiatric disability has no more effect on people's rights than does the existence of any other disability label. 1. Annurev.clinpsy.3.022806. Molecular Psychiatry. Hypotheses non fingo. Hypotheses non fingo (Latin for "I feign no hypotheses", "I frame no hypotheses", or "I contrive no hypotheses") is a phrase used by Isaac Newton in an essay, "General Scholium", which was appended to the second (1713) edition of the Principia. 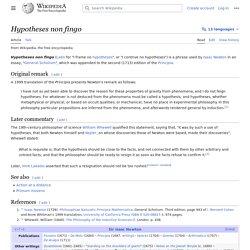 Original remark[edit] A 1999 translation of Principa presents Newton's remark as follows. I have not as yet been able to discover the reason for these properties of gravity from phenomena, and I do not feign hypotheses. For whatever is not deduced from the phenomena must be called a hypothesis; and hypotheses, whether metaphysical or physical, or based on occult qualities, or mechanical, have no place in experimental philosophy. Psychologists and Psychiatrists Jokes at WorkJoke.com - Profession Jokes. A guy goes in to see a psychologist. 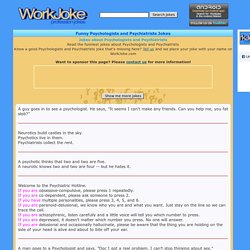 He says, "It seems I can't make any friends. Can you help me, you fat slob? " Neurotics build castles in the sky.

Untitled. The next generation of online reference works will require structured representations of their contents in order to support scholarly functions such as semantic search, automated generation of cross-references, tables of contents, and ontology-driven conceptual navigation. 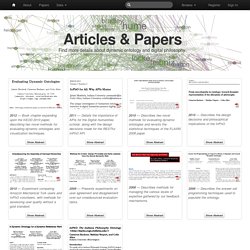 Many of these works can be expected to contain massive amounts of data and be updated dynamically, which limits the feasibility of "manually" coded ontologies to keep up with changes in content. However, relationships relevant to inferring an ontology can be recovered from statistical text processing, and these estimates can be verified with carefully-solicited expert feedback. Untitled. Referring to Reichlin’s reflections, the author analyzes the aporias arised in the debate on euthanasia, proposes to establish some general principles (e.g. inviolability of human life, the prohibition of extend unnecessary suffering, the principle of autonomy) and a method of application of them to controversial cases. 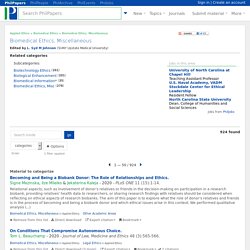 The combinatorial ethics that emerges can probably solve the aporias and can harmonize the common sense (about the possibility of euthanasia in extreme cases) with Catholic doctrine – specifically referring to the Natural Moral Law (...) theory – in an attempt to integrate the results of combinatorial ethics with the principles established in this doctrine. The conclusions, although admittedly provisional, are translated into indications for an hypothetical legislator, in order to overcome the legislative aporia. Remove from this list. Untitled. Botanical preparations used by shamans in rituals for divination, prophecy, and ecstasy contain widely different psychoactive compounds, which are incorrectly classified under a single denomination such as “hallucinogens,” “psychedelics,” or “entheogens.” 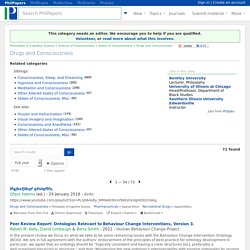 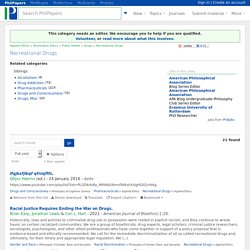 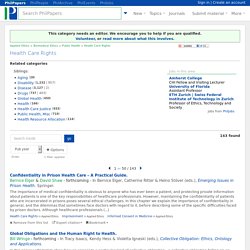 Springer.detailsThe importance of medical confidentiality is obvious to anyone who has ever been a patient, and protecting private information about patients is one of the key responsibilities of healthcare professionals. However, maintaining the confidentiality of patients who are incarcerated in prisons poses several ethical challenges. In this chapter we explain the importance of confidentiality in general, and the dilemmas that sometimes face doctors with regard to it, before describing some of the specific difficulties faced by prison doctors. Untitled. How Not to Make Trade-Offs Between Health and Other Goods.Antti Kauppinen - manuscriptdetails(Paper offline for revision) In the context of a global pandemic, there is good health-based reason for governments to impose various social distancing measures. 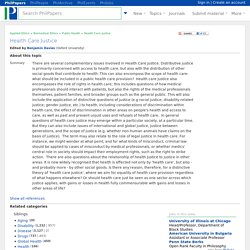 However, in addition to health benefits, such measures also cause economic and other harms. In this paper, I look at proposals to make use of existing QALY (quality-adjusted life year) valuations and WELLBYs (wellbeing-adjusted life-years) as the currency for making trade-offs between health and other goods. I argue that both methods are problematic. First, whether the costs (...) and benefits are translated into money or well-being, the result is that morally irrelevant utilities are weighed against morally relevant ones. Untitled. What It Might Be Like to Be a Group Agent.Max F. Kramer - forthcoming - Neuroethics.detailsMany theorists have defended the claim that collective entities can attain genuine agential status. If collectives can be agents, this opens up a further question: can they be conscious? Untitled. May I Have Your Uterus? The Contribution of Considering Complexities Preceding Live Uterus Transplantation.Lisa Guntram - forthcoming - Medical Humanities:medhum-2020-011864.detailsUterus transplantation combined with in vitro fertilisation as a treatment for infertility caused by an absence or malfunction of the uterus is advancing.

About 50 transplantations have been conducted worldwide and at least 14 children have been born—9 of them by women taking part in a Swedish research project on UTx-IVF. The Swedish research protocol initially stated that the potential recipient must ‘have her own donor’ who is preferably related to the recipient. But what does it mean to ask someone (...) for a uterus? Untitled. Self-Ownership and Abortion.Rajiv Shah - manuscriptdetailsThis paper argues that in the absence of general duties to rescue a woman may, at any time, terminate an unintended pregnancy even if the foetus is a person. However the rights of the foetus restrict the procedures one may use. In particular only an evictionist procedure may be used. Furthermore the argument presented does not rely on any act of balancing the rights of the woman against the rights of the foetus.

Untitled. E-Cigarettes and the Multiple Responsibilities of the FDA.Larisa Svirsky, Dana Howard & Micah Berman - forthcoming - American Journal of Bioethics.detailsThis paper considers the responsibilities of the FDA with regard to disseminating information about the benefits and harms of e-cigarettes. Tobacco harm reduction advocates claim that the FDA has been overcautious and has violated ethical obligations by failing to clearly communicate to the public that e-cigarettes are far less harmful than cigarettes.

We argue, by contrast, that the FDA’s obligations in this arena are more complex than they may appear at first blush. Untitled. This book introduces readers to the many arguments and controversies concerning abortion. While it argues for ethical and legal positions on the issues, it focuses on how to think about the issues, not just what to think about them. It is an ideal resource to improve your understanding of what people think, why they think that and whether their (and your) arguments are good or bad, and why. It's ideal for classroom use, discussion groups, organizational learning, and personal reading. -/- (...) Untitled. La médecine narrative face à l’impossible singularité des récits.Juliette Ferry-Danini - 2020 - Lato Sensu, Revue de la Société de Philosophie des Sciences 2 (7):1-6.detailsSelon l’une des thèses les plus répétées de la médecine narrative, la théorie littéraire, ou plus largement, la narration, permettrait aux membres du personnel médical d’appréhender les récits des patients et par là, de prendre en considération leurs expériences dans leur singularité absolue.

It isn’t as mysterious as it’s made out to be; the possibility of strong emergence is not a threat to science. -/- • INTERACTIONS BETWEEN HIGHER-LEVEL ENTITIES. Physical interaction among higher-level entities is illusory. Abstract interactions are the source of emergence, new domains of knowledge, and complex systems. -/- • PHYSICS and the (...) SPECIAL SCIENCES.