Nutritional Deficiencies in Children with Celiac Disease Resulting from a Gluten-Free Diet: A Systematic Review - PubMed. Background: A strictly gluten-free diet (GFD) is the basis for managing celiac disease (CD). 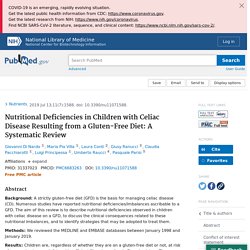 Numerous studies have reported nutritional deficiencies/imbalances ascribable to a GFD. The aim of this review is to describe nutritional deficiencies observed in children with celiac disease on a GFD, to discuss the clinical consequences related to these nutritional imbalances, and to identify strategies that may be adopted to treat them. Methods: We reviewed the MEDLINE and EMBASE databases between January 1998 and January 2019. Results: Children are, regardless of whether they are on a gluten-free diet or not, at risk of consuming too much fat and insufficient fiber, iron, vitamin D, and calcium. Non Celiac Gluten Sensitivity and Wheat/Grain-related Sensitivities. Not Just Wheat Gluten.

Troubleshooting a Gluten-Free Diet. Gluten Free Recipe Sites. Grain-free Diets. Supportive Sites for the Gluten-Free Diet. Gluten-Free Diets Can Be Healthy for Kids. Created as a guest post for www.WhatToExpect.com When actress Gwyneth Paltrow recently admitted that her family does not eat grains, the media got all riled up that she was depriving her children’s brains of vital energy and nutrition (see here)! 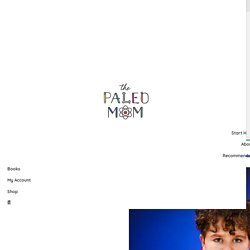 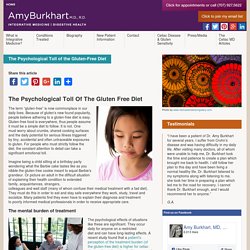 Because of gluten’s new found popularity, people believe adhering to a gluten-free diet is easy. Gluten-free food is everywhere, thus people assume it must be a simple diet to follow. It is not. One must worry about crumbs, shared cooking surfaces and the daily potential for serious illness triggered by tiny, accidental and often untraceable exposures to gluten. SHOULD EVERYONE AVOID GLUTEN? – Victoria Fenton Healthcare.

Perhaps the food with the most renown for its direct effects on the digestive tract – and subsequent health consequences – is gluten. 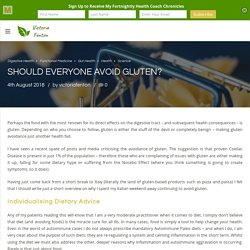 Depending on who you choose to follow, gluten is either the stuff of the devil or completely benign – making gluten avoidance just another health fad. I have seen a recent spate of posts and media criticising the avoidance of gluten. The suggestion is that proven Coeliac Disease is present in just 1% of the population – therefore those who are complaining of issues with gluten are either making it up, falling for some dietary hype or suffering from the Nocebo Effect (where you think something is going to create symptoms, so it does). Having just come back from a short break to Italy (literally the land of gluten-based products such as pizza and pasta) I felt that I should write just a short overview on why I spent my Italian weekend away continuing to avoid gluten. 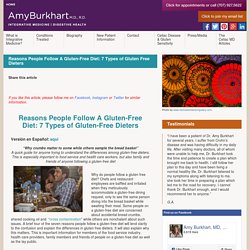 Past columns by Dr. Interview with Elena Verdú: “It is very important to have a medical diagnosis before starting any restrictive diet” Celiac Disease Diet: Foods, Tips & Products to Avoid. Estimates show that rates of celiac disease diagnoses have risen by nearly 400 percent since the 1960s, and many health authorities speculate that there still may be a significant percentage of people living with undiagnosed celiac disease or similar problems.(1) In the U.S. and most other industrialized nations, slightly less than 1 percent of all adults have been diagnosed with celiac disease. (2) For these people, following a celiac disease diet, which mean a strictly gluten-free diet, is considered to be the only definitive way to improve celiac disease symptoms and prevent complications. 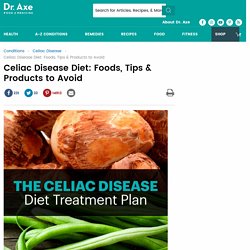 The biggest threat associated with untreated celiac disease, or other similar food allergies, is that it can cause long-term health problems, such as malnutrition, developmental delays, lowered immunity, neurological illnesses and psychiatric illnesses. Gluten-Free Diet Guide: Gluten-Free Foods, Benefits & More. By Rachael Link, MS, RD In just the last few years alone, the gluten-free diet has skyrocketed in popularity. 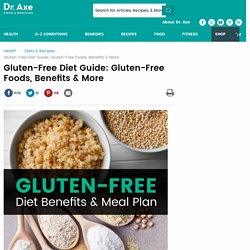 In fact, it seems like just about everyone is avoiding gluten — regardless of whether or not they really need to. Gluten-free foods have become synonymous with healthy eating, right alongside all things sugar-free, dairy-free and low-carb. But what is gluten, why is gluten bad and do you really need to take it out of your diet? For some, cutting gluten out of the diet can come with big benefits when it comes to health. 10 Healthy, Gluten-Free Food Swaps. A Healthy Gluten-Free Diet: Foods to Eat, Foods to Avoid. The Gluten-Free Diet - A Detailed Beginner's Guide. Learn the Gluten-Free Diet. The Gluten Doctors: How Long Does it Take to Heal After Removing Gluten? A reader asks: “How long does it take for the small intestine to heal once gluten is out of the diet..for a person in their 50's?” 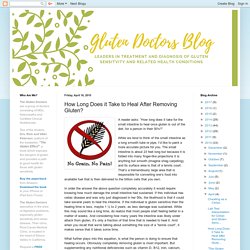 While we tend to think of the small intestine as a long smooth tube or pipe, I’d like to paint a more accurate picture for you. The small intestine is about 23 feet long but because it is folded into many finger-like projections it is anything but smooth (imagine shag carpeting), and its surface area is that of a tennis court. That’s a tremendously large area that is responsible for converting one’s food into available fuel that is then delivered to the trillion cells that you own. In order the answer the above question completely accurately it would require knowing how much damage the small intestine had sustained. If this individual has celiac disease and was only just diagnosed in her 50s, the likelihood is that it could take several years to heal the intestine. I hope you find this helpful and please let me know if I can be of further assistance.

The Gluten Doctors: Is it an Error to Be Relatively Gluten Free? A listener from the recent virtual book tour asks: Are there degrees of gluten sensitivity, or is it an all or nothing thing? 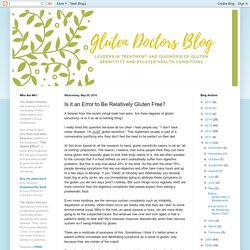 I really liked this question because all too often I hear people say: "I don't have celiac disease, I'm JUST gluten sensitive. " This statement usually is part of a conversation justifying why they don’t feel the need to be perfect on their diet. At this time, based on all the research to hand, gluten sensitivity seems to be an “all or nothing” proposition. The reason, I believe, that some people think they can have some gluten with impunity goes to how their body reacts to it. We are often wedded to the concept that if a food bothers us we’ll undoubtedly suffer from digestive problems. Even more insidious are the nervous system complaints such as irritability, depression or anxiety. There are a multitude of examples of this. The bottom line is this. I have seen such things occur in patients because they wanted to believe that they could cheat with impunity. 10 tips for healthier gluten free diet. 10 Tips for a Healthier Gluten-Free Diet In the past several months we have seen a media backlash of information regarding the gluten-free diet. 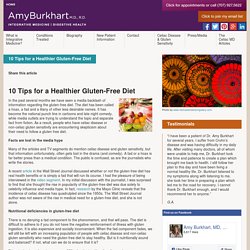 The diet has been called a hoax, a fad and a litany of other less desirable names. It has become the national punch line in cartoons and late night comedy, while media outlets are trying to understand the topic and separate fact from fiction. The Truth About Gluten and Going Grain Free. Gluten-Free Grains Your Digestive System Will Love. Gluten-free has become so popular on shelves today that practically every company out there touts a gluten-free product in one shape or form.

While gluten-free does not mean healthy, often buzzwords like this are used to really push products, and that brings us to why it’s so important to really know if those “gluten-free grains” you’re buying are actually sans gluten and a healthy option otherwise. What is gluten? According to the Whole Grains Council, gluten is a protein found in wheat — such as spelt, kamut, einkorn, farro/emmer, barley, rye and triticale — that’s hard for some people to digest.

It helps bind and shape foods by creating elasticity. About 1 percent to 2 percent of the population has celiac disease, which is an autoimmune form of gluten intolerance. Do Gluten-Free Diets Increase Mercury, Lead, and Arsenic? Eating for 10 Trillion: How Diet Affects the GI Microbiome. Common Questions People Ask When Going on a Gluten Free Diet. Here’s Why A Gluten-Free Diet Can Become Incredibly Unhealthy. “Dr. Hyman, I’ve recently gone gluten-free, and I’ve seen tons of replacements for traditionally gluten-laden foods,” a writer recently emailed me. “I’m a little suspicious, but are any of these choices healthy?” We are all aware that “gluten-free” has become a major buzz term. Restaurants proudly offer options like gluten-free bread, and even mainstream supermarkets have whole aisles dedicated to the trend.

Nearly everyone has jumped on the gluten-free bandwagon. I don’t recommend this to everyone – not at least until you understand a few facts … and here’s why. As a doctor who treats sick patients, I find that gluten often is a major cause of digestive, autoimmune, weight, mood and neurologic problems. The biggest problem with demonizing a food substance is caused by the food industry.

A low-carb fake food might be higher in trans-fat, artificial sweeteners and excessive amounts of sugar alcohols. Wheat and Innate Immunity. Despite mainstream nutrition’s continued promotion of grain-based foods as part of a healthy diet, the evidence against wheat continues to grow (and grow, and grow!). And, it’s becoming increasingly clear that celiacs aren’t the only ones who need to be cautious about eating this ubiquitous grain!

One of the latest strikes against wheat is its impact on the innate immune system. Several studies have found that wheat amylase trypsin inhibitors, or ATIs (proteins that help protect plants from getting eaten by pests, and which are entirely separate from gluten!) Have the ability to stimulate the body’s innate immune system by activating certain myeloid immune cells (including dendritic cells, macrophages, and monocytes). (As a reminder, the innate immune system is the body’s nonspecific first line of defense against foreign invaders, in contrast to the adaptive immune system, which is more complex and involves immunological memory of specific antigens. Th. What is the Difference Between a Gluten Free and a Specific Carbohydrate Diet (SCD)?

Is The Gluten Free Diet Dangerous to Follow? The Gluten Doctors: Mild Gluten Sensitivities – How much Gluten is Safe to eat? I am frequently asked how ‘careful’ someone has to be if they have gluten sensitivity. Those individuals suffering from celiac disease know, or should, that ANY gluten is too much. Their immune systems are highly sensitive and reactive, and dangerous contamination can literally be in the form of a crumb.

The Gluten Doctors: A Gluten Free Diet Helps Type 1 Diabetes. It has long been understood that two autoimmune diseases, celiac disease and type 1 diabetes are related. They share common genes and the incidence of celiac disease is higher among type 1 diabetics. There have been some anecdotal reports regarding children diagnosed with type 1 diabetes who were put on a gluten-free diet soon after their diagnosis and for a period of two years or more didn’t require any insulin. The thought was that the gluten-free diet effectively halted the progression of the diabetes, at least for the duration of the study. Studies of mice have shown that despite utilizing a genetic strain of mice that was strongly in-bred to increase the risk of type 1 diabetes, 2/3 of the mice did not develop the disease when a drug was administered to prevent leaky gut.

This study was performed by Dr Alessio Fasano and his team. Clinically, we frequently see this with patients here at HealthNOW Medical. Gluten Free Diets and Lowering Cholesterol.