Wheat has many proteins other than gluten may contributed to the sensitivity of people who cannot tolerate wheat. Perceived gluten intolerance may be related to an intolerance of FODMAPS. Also, all grains contain glutens and some people become sensitive to those.

In particular, celiacs need to avoid the glutens found in rye and barley.

The problem might not be gluten. My niece can eat sourdough bread made from stone ground Red Fife flour but not any bread made from commercially milled flours which heat the flour and may change its chemical make-up. Some can tolerate older varieties such as Einkhorn and Spelt. (This wouldn't apply to celiacs who cannot tolerate any gluten.)

What you personally need to avoid depends upon what the problem is. An Update on COVID 19 and Gluten Intolerance, with Dr. Ramzi Asfour. A common Food Ingredient Triggers Autoimmune - Amy Burkhart M.D., R.D. It is not disclosed on labels, but may trigger a leaky gut. 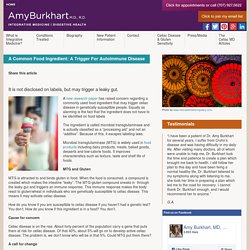 A new research paper has raised concern regarding a commonly used food ingredient that may trigger celiac disease in genetically susceptible people. Equally as alarming is the fact that the ingredient does not have to be identified on food labels The ingredient is called microbial transglutaminase and is actually classified as a “processing aid” and not an “additive”. Because of this, it escapes labeling laws. How Gluten (and other Prolamins) Damage the Gut.

Amylase Trypsin Inhibitors. Pesticides. "Gluten Sensitivity" May Be a Misnomer for Distinct Illnesses to Various Wheat Proteins. Two years ago, at the recommendation of a nutritionist, I stopped eating wheat and a few other grains. 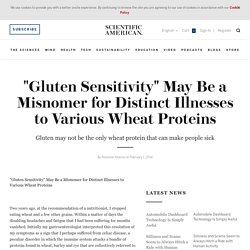 Within a matter of days the disabling headaches and fatigue that I had been suffering for months vanished. Celiac: Inherited or Acquired? – Real Food Forager. In the past 50 years celiac disease has increased from 1 in 700 to 1 in 100. 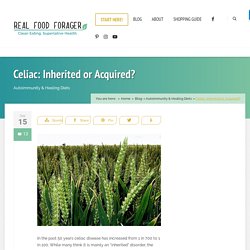 While many think it is mainly an “inherited” disorder, the pattern of inheritance is complicated. Additionally, there is a lot more involved than inheritance. It’s easy to blame a disease state on inheritance. "Gluten Sensitivity" May Be a Misnomer for Distinct Illnesses to Various Wheat Proteins. Wheaty Indiscretions: What Happens to Wheat, from Seed to Storage. Are You Gluten or FODMAP Sensitive? Celiac Disease, Is the Ingestion of Gluten the Only Cause? Hyperlipid: Wheat and lactose. Apart from gluten there are a large number of other proteins in wheat. 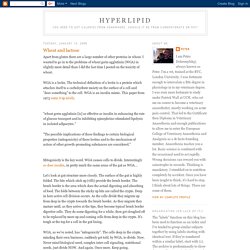 I wanted to go in to the problems of wheat germ agglutinin (WGA) in slightly more detail than I did the last time I posted on the toxicity of wheat. WGA is a lectin. The technical definition of a lectin is a protein which attaches itself to a carbohydrate moiety on the surface of a cell and "does something" to the cell. WGA is an insulin mimic. This paper from 1973 sums it up nicely. "wheat germ agglutinin [is] as effective as insulin in enhancing the rate of glucose transport and in inhibiting epinephrine-stimulated lipolysis in isolated adipocytes. " "The possible implications of these findings to certain biological properties (mitogenicity) of these lectins and to the mechanism of action of other growth-promoting substances are considered.

" Mitogenicity is the key word. Let's look at gut structure more closely. WGA, as we've noted, has "mitogenicity". Not very good! It's a metabolic poison. I'm sounding like Dr Davis. Hyperlipid: How toxic is wheat? Well, the first point is that Wheat Germ Agglutinin (WGA), the main lectin in wheat, is an insulin mimetic in tissue culture. 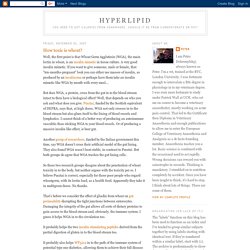 A very good insulin mimetic. If you want to give someone, male or female, that "ten-months-pregnant" look you can either use masses of insulin, as produced by an insulinoma or perhaps have them take an insulin mimetic like WGA by mouth with every meal... But does WGA, a protein, cross from the gut in to the blood stream intact to then have a biological effect? Well, that depends on who you ask and what dose you give. A Grounded Guide to Gluten: How Modern Genotypes and Processing Impact Wheat Sensitivity - Kucek - 2015 - Comprehensive Reviews in Food Science and Food Safety - Wiley Online Library.

The History of How Wheat Became Toxic. The Case for Rejecting or Respecting the Staff of Life Gluten intolerance, wheat allergy and celiac dis- ease are all related categories of digestive and immune system disorders that have become increasingly familiar to anyone following modern trends in human health. 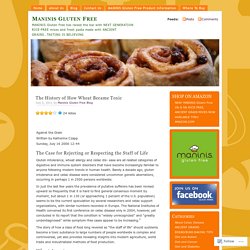 Barely a decade ago, gluten intolerance and celiac disease were considered uncommon genetic aberrations, occurring in perhaps 1 in 2500 persons worldwide. In just the last few years the prevalence of putative sufferers has been revised upward so frequently that it is hard to find general consensus moment by moment, but about 1 in 130 (or approaching 1 percent of the U.S. population) seems to be the current speculation by several researchers and celiac support organizations, with similar numbers recorded in Europe.

What's wrong with modern wheat – GRAINSTORM. How an ancient food staple became toxic junk food, and what we can do about it (without going gluten-free) Grain has been at the heart of humankind's diet for thousands of years. 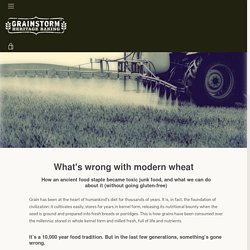 It is, in fact, the foundation of civilization: it cultivates easily, stores for years in kernel form, releasing its nutritional bounty when the seed is ground and prepared into fresh breads or porridges. This is how grains have been consumed over the millennia: stored in whole kernel form and milled fresh, full of life and nutrients. It’s a 10,000 year food tradition. But in the last few generations, something’s gone wrong.

Can an Increase in Celiac Disease Be Attributed to an Increase in the Gluten Content of Wheat as a Consequence of Wheat Breeding? Coeliac disease: immunogenicity studies of barley hordein and rye secalin-derived peptides. - PubMed - NCBI. Gluten Sensitivity and FODMAPs - The Gluten Intolerance Group of North America. Is gluten really the culprit in gluten sensitivity. Non-Celiac Gluten Sensitivity is poorly understood and no valid test currently exists to diagnose it. 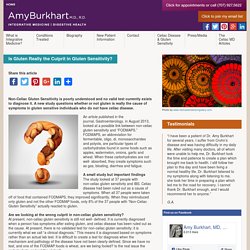 A new study questions whether or not gluten is really the cause of symptoms in gluten sensitive individuals who do not have celiac disease. An article published in the journal, Gastroenterology, in August 2013, looked at a possible link between non-celiac gluten sensitivity and “FODMAPS.” FODMAPS, an abbreviation for fermentable, oligo, di, monosaccharides and polyols, are particular types of carbohydrates found in some foods such as apples, watermelon, onions, garlic and wheat. A carb called fructan may be the real culprit behind gluten sensitivity. Many Americans have become obsessed with avoiding gluten, despite the dearth of scientific evidence proving this protein (found in wheat, rye, and barley) actually makes people who haven’t been diagnosed with celiac disease, a serious autoimmune disease, or wheat allergy sick. 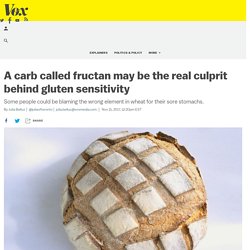 So how to explain the symptoms of people with so-called non-celiac gluten sensitivity — the bloating, stomach pain, and fatigue they say are alleviated with a gluten-free diet? For the past several years, scientists began to suspect that maybe other elements in grains are causing these digestion issues. And they’ve zeroed in on a group of carbohydrates called FODMAPs, or “fermentable oligosaccharides, disaccharides, monosaccharides, and polyols,” which humans lack the digestive enzymes to break down. Fructan, Rather Than Gluten, Induces Symptoms in Patients With Self-reported Non-celiac Gluten Sensitivity - Gastroenterology. Histamine Intolerance: Could it be causing your symptoms? - Amy Burkhart M.D., R.D. Histamine Intolerance: Could it be causing your symptoms? 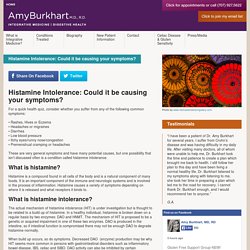 For a quick health quiz, consider whether you suffer from any of the following common symptoms: • Rashes, Hives or Eczema • Headaches or migraines • Diarrhea • Low blood pressure • Itchy eyes/runny nose/congestion • Premenstrual cramping or headaches These are very general symptoms and have many potential causes, but one possibility that isn’t discussed often is a condition called histamine intolerance. Gluten: No Grain, No Pain Micki Rose. Nutritionist Micki Rose lifts the lid on why stopping wheat, rye and barley may not be enough to avoid gluten If you’re diagnosed coeliac but still feel unwell, failed a coeliac test but know gluten affects you, or simply suspect that certain grains, and not just the obvious ones, don’t suit you, listen up.

There is gluten in ALL grains, not just wheat, rye and barley and avoiding just these ‘traditional’ gluten grains may not be enough. A lot of people are as yet undiagnosed coeliacs – only about 10-15% are currently diagnosed according to Coeliac UK – but some experts reckon many more could have Non-Coeliac Gluten Sensitivity [NCGS].

You can even have both. Gluten Free - Fungus Free? Sufferers of Celiac disease have problems digesting gluten, the protein found in wheat. Eating any sort of wheat or wheat product can cause those afflicted with the disease painful stomach cramping. The severity varies, from mild to those who can't even eat food that has been in contact with wheat. If the condition is ignored and the patient continues to eat wheat and wheat products, it has been linked with progression to certain types of stomach cancers - pretty serious stuff. New Mechanism Found in Gluten Sensitivity. Patients with Celiac Disease React to Multiple Gluten Proteins.