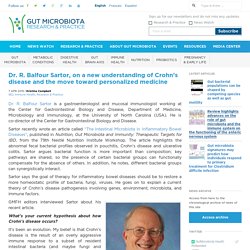 R. Balfour Sartor is a gastroenterologist and mucosal immunologist working at the Center for Gastrointestinal Biology and Disease, Department of Medicine, Microbiology and Immunology, at the University of North Carolina (USA). He is co-director of the Center for Gastrointestinal Biology and Disease. Sartor recently wrote an article called “The Intestinal Microbiota in Inflammatory Bowel Diseases”, published in Nutrition, Gut Microbiota and Immunity: Therapeutic Targets for IBD, from the 79th Nestlé Nutrition Institute Workshop. The article highlights the abnormal fecal bacterial profiles observed in pouchitis, Crohn’s disease and ulcerative colitis.

Sartor says the goal of therapy for inflammatory bowel diseases should be to restore a more homeostatic profile of bacteria, fungi, viruses. Dr. F. prausnitzii and Crohn's: New anti-inflammatory molecules identified. Faecalibacterium prausnitzii is known for exhibiting anti-inflammatory effects in vitro and in vivo by secreted metabolites that block nuclear factor (NF)-κB activation.

F. prausnitzii grows on pectin, a carbohydrate in fruit. Thought I would add this in. – kiraonysko

The low proportion of F. prausnitzii in the microbiome of Crohn’s disease patients characterizes the microbial dysbiosis associated with that condition. 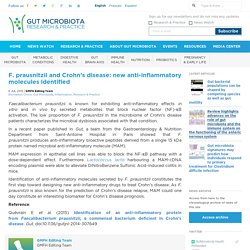 In a recent paper published in Gut, a team from the Gastroenterology & Nutrition Department from Saint-Antoine Hospital in Paris showed that F. prausnitzii produces anti-inflammatory bioactive peptides derived from a single 15 kDa protein named microbial anti-inflammatory molecule (MAM). MAM expression in epithelial cell lines was able to block the NF-κB pathway with a dose-dependent effect. Gut bacterial and fungal community interactions identified for first time as a factor in Crohn’s disease - Gut Microbiota for Health. Crohn’s disease (CD) is a relapsing inflammatory bowel disease that results from a complex interplay between host genetic factors and endogenous microbial communities. 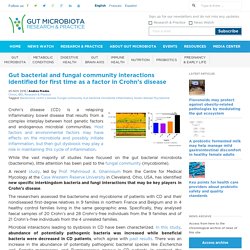 Host factors and environmental factors may have effects on the microbiota and possibly initiate inflammation, but then gut dysbiosis may play a role in maintaining this cycle of inflammation. While the vast majority of studies have focused on the gut bacterial microbiota (bacteriome), little attention has been paid to the fungal community (mycobiome). A recent study, led by Prof. Mahmoud A. Ghannoum from the Centre for Medical Mycology at the Case Western Reserve University in Cleveland, Ohio, USA, has identified new specific interkingdom bacteria and fungi interactions that may be key players in Crohn’s disease. Microbial interactions leading to dysbiosis in CD have been characterized. On the whole, these results show that interactions between the gut bacteriome and mycobiome are closely associated with CD. Diarrhoea-causing bacteria may promote growth of a bacterial pathobiont linked to Crohn’s disease in mice - Gut Microbiota for Health. A recent study, led by Prof. 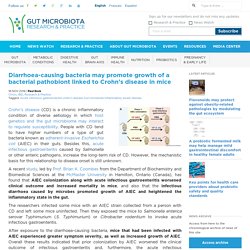 Brian K. Coombes from the Department of Biochemistry and Biomedical Sciences at the McMaster University in Hamilton, Ontario (Canada), has found that AIEC colonization along with acute infectious gastroenteritis worsened clinical outcome and increased mortality in mice, and also that the infectious diarrhoea caused by microbes promoted growth of AIEC and heightened the inflammatory state in the gut.

The researchers infected some mice with an AIEC strain collected from a person with CD and left some mice uninfected. Then they exposed the mice to Salmonella enterica serovar Typhimurium (S. Typhimurium) or Citrobacter rodentium to invoke acute infectious gastroenteritis. After exposure to the diarrhoea-causing bacteria, mice that had been infected with AIEC experienced greater symptom severity, as well as increased growth of AIEC. Reference: Small CL, Xing L, McPhee JB, Law HT, Coombes BK.

Crohn’s Disease: Fistula – alternative approach. Fluoroquinolone are pretty standard for treating fistulas because it is so broad spectrum. 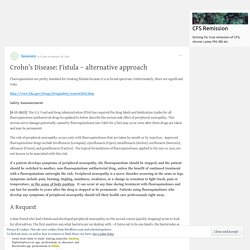 Unfortunately, there are significant risks. Safety Announcement [8-15-2013] The U.S. Food and Drug Administration (FDA) has required the drug labels and Medication Guides for all fluoroquinolone antibacterial drugs be updated to better describe the serious side effect of peripheral neuropathy. This serious nerve damage potentially caused by fluoroquinolones (see Table for a list) may occur soon after these drugs are taken and may be permanent. 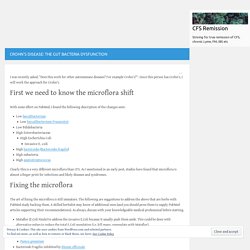 For example Crohn’s?”. Since this person has Crohn’s, I will work the approach for Crohn’s. With some effort on PubMed, I found the following description of the changes seen: Low faecalibacteriumLow faecalibacterium PraunsitziiLow BifidobacteriaHigh Enterobacteriaceae High Escherichia Coli Invasive E. coliHigh bacteroides (Bacteroides fragilis)High eubacteriaHigh peptostreptococcus Clearly this is a very different microflora than CFS. The art of fixing the microflora is still immature. Mutaflor (E.Coli Nissle) to address the invasive E.Coli because it usually push them aside. Crohn’s Disease: #1 A review. A dear friend suffers from Crohn’s Disease and conventional treatments were not working for her – severe reactions to prescription medicine and significant neurological symptoms (which fortunately cleared when she stopped taking them). 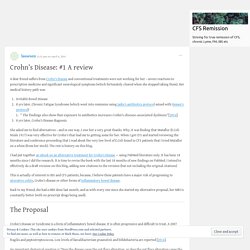 Her medical history path was: Irritable Bowel Disease8 yrs later, Chronic Fatigue Syndrome (which went into remission using Jadin’s antibiotics protocol mixed with Hemex’s protocol) ” The findings also show that exposure to antibiotics increases Crohn’s-disease-associated dysbiosis”[2014]8 yrs later, Crohn’s Disease diagnosis She asked me to find alternatives – and in one way, I owe her a very great thanks. Why, it was finding that Mutaflor (E.Coli Nissle 1917) was very effective for Crohn’s that lead me to getting some for her. When I got CFS and started reviewing the literature and conference proceeding that I read about the very low level of E.Coli found in CFS patients that I tried Mutaflor on a whim (from her stock).

E. Fecal Transplants. Crohn’s Disease: #2 – The Strategy. CFS and IBS have very low E.Coli level, while UC and Crohn’s has very high E.Coli levels — yet I believe that the first syndromes leads to the second syndrome often. 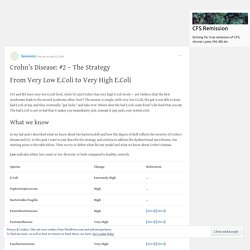 Now? The answer is simple, with very low E.Coli, the gut is not able to keep bad E.Coli at bay and they eventually “get lucky” and take over. Where does the bad E.Coli come from? Like food that you eat. Crohn’s Disease: #3 Correcting Overview. In my prior ebook, I focused solely on reducing E.Coli, below is the update on the what should be done – based on the strategy that I described in my prior post. 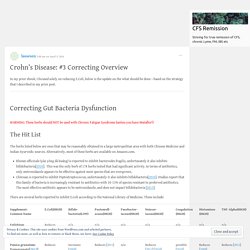 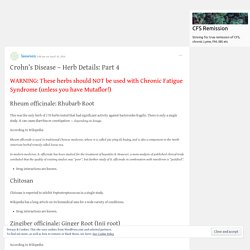 Rheum officinale: Rhubarb Root This was the only herb of 178 herbs tested that had significant activity against bacteroides fragilis. There is only a single study. It can cause diarrhea or constipation — depending on dosage. According to Wikipedia: Rheum officinale is used in traditional Chinese medicine, where it is called yào yòng dà huáng, and is also a component in the North American herbal remedy called Essiac tea. Crohn’s Disease: #5 Probiotics. Escherichia Coli Nissle 1917: Mutaflor Mutaflor is the only known Escherichia Coli probiotic. There have been many clinical trials demonstrating its effectiveness for Ulcerative Colitis, Chronic Constipation, Crohn’s Disease, Irritable Bowel Syndrome and many related conditions. According to Wikipedia: The Mutaflor strain was isolated by Professor Alfred Nissle in 1917 during the First World War. As such, the strain was named after him as Escherichia coli Nissle 1917.2 It has been clinically studied and reviewed for over 80 years to prevent and treat an assortment of gastrointestinal disorders.

Crohn’s Disease: Diets – What works and how well. Crohn’s Disease: Supplements. This is a review of supplements and Crohn’s Disease[CD]. Some of the findings may apply to IBS and CFS. “A diet high in protein, particular animal protein, may be associated with increased risk of inflammatory bowel disease and relapses” [2012]” Micronutrient intakes were suboptimal most notably for folate, vitamins C, E, and calcium.” [2007]Trace ElementsThe recommendation of the supplementation of these trace elements [Zinc, Selenium, Copper] in IBD is further supported by the findings of this study'[2002]Copper[Cu]No studies on supplementation on humans with CD foundSelenium [Se]“Selenium deficiency is common in patients with severe gastrointestinal disorders.

Probiotics – recent articles #autoimmune, #crohns. IBD, Crohn's disease, and the microbiome — The American Microbiome Institute. In the study the researchers sampled and sequenced the microbiome of the gut mucosa and stool. From this data, they identified specific bacteria that had higher abundances in diseased patients, like Enterobacteriaceae and Veillonellaceae, and others that had lower than normal abundances, such as Clostridiales and Bacteroidales. According to the samples, these relative abundances were more pronounced in the mucosal samples, rather than the stool samples, meaning that the mucosa may play a more important role in Crohn’s pathogenesis and diagnosis. Moreover, children under age 10 did not have large populations of the ‘bad’ bacteria, which were negatively correlated with age. Another important finding from the study is that antibiotic treatment of the Chrohn’s disease further exacerbated the microbial imbalances (dysbiosis), and caused the bad bacteria to proliferate and the good bacteria to die off.

A final conclusion of the paper is that the gut mucous is a more accurate signal for IBD. Crohn's Disease: Analysis of Microbiome and Diet (LRD and SCD) Crohns Disease and the Yeast Connection.

MAP the Cause of Crohn's Disease and Ulcerative Colitis. Dysbiotic gut microbiota causes transmissible Crohn's disease-like ileitis independent of failure in antimicrobial defence. Introduction. The effect of various treatments for juvenile Crohn’s disease on the microbiome — The American Microbiome Institute. The scientists measured the microbiomes and inflammatory markers of 90 children before and after entering therapy for Crohn’s: 52 taking anti-TNF (an immunosuppressant), 22 taking the enteral nutrition exclusively (i.e. something like soylent), and 16 taking the enteral nutrition along with any other food they wanted. The scientists also took samples from 26 healthy children. They discovered that of the 45 most abundant bacteria in each child, 14 were different between the Crohn’s children and the healthy children. Recent advances: personalised use of current Crohn's disease therapeutic options. + Author Affiliations Correspondence to Dr Séverine Vermeire, Department of Gastroenterology, University Hospitals Leuven, Herestraat 49, Leuven 3000, Belgium; severine.vermeire@uzleuven.be Received 6 February 2013 Revised 19 March 2013 Accepted 20 March 2013.