Up close and Graphic

This 16 Day Timelapse of Bread in Water is So Gross but I Can’t Look Away. That was disgusting, play it again. 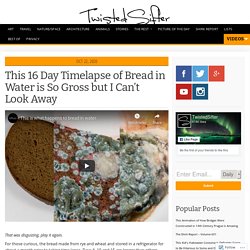 For those curious, the bread made from rye and wheat and stored in a refrigerator for about a month prior to taking time lapse. Days 6, 10 and 15 are longer than others because parts of video shows footage from same time period but zoomed in to different locations. Play speed is constant – 14400x (one shot every 8 minutes played at 30 FPS). “If you notice any shimmering, mostly in upper left part of video, that looks like hot air shimmering, well that is exactly what it is. Lighting was very close to subject, so it affected shots made from above.” Timelapse was filmed and edited by GPhase on YouTube googletag.cmd.push(function() { googletag.display(‘div-gpt-ad-1583941906523-0’); }); (6) Highly organized plaque with spirochetes X1200. Principles of Pediatric Dermatology - Chapter11 : VIRAL SKIN INFECTIONS. Viruses have different structures, compositions, pathological and clinical manifestations. 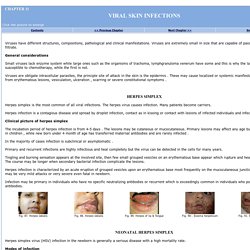 Viruses are extremely small in size that are capable of passing the bacterial filtrate. General considerations Small viruses lack enzyme system while large ones such as the organisms of trachoma, lymphgranuloma venerum have some and this is why the latter group is susceptible to chemotherapy, while the first is not. Viruses are obligate intracellular parasites, the principle site of attack in the skin is the epidermis . These may cause localized or systemic manifestations that varies from erythematous lesions, vesiculation, ulceration , scarring or severe constitutional symptoms . Herpes simplex is the most common of all viral infections. Herpes infection is a contagious disease and spread by droplet infection, contact as in kissing or contact with lesions of infected individuals and infected fomites .

Clinical picture of herpes simplex. Parasites > Gross Parasite Pictures and Videos. Demodex folliculorum, or the demodicid also known as the eyelash mite, is a tiny mite, less than 0.4 mm long, that lives in pores and hair follicles, usually on the nose, forehead, cheek, and chin, and often in the roots of eyelashes. 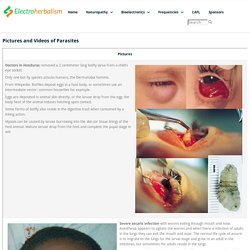 (A follicle is the pore from which a hair grows). It is not really a parasite since it lives on dead skin cells and secretions, but overgrowth of them can cause irritation. Demodicids have a wormlike appearance, with legs that are mere stumps. People with oily skin, or those who use cosmetics heavily and don't wash thoroughly, have the heaviest infestations ... but most adults carry a few demodicids. Inflammation and infection often result when large numbers of these mites congregate in a single follicle. The mites live head-down in a follicle, feeding on secretions and dead skin debris. (2) His Face Was Deformed by Flesh- Eating Fungus.

How I Killed My Intestinal Parasites (warning: gross) A teratoma tumor complete with teeth, eyes, and veins : Damnthatsinteresting. Teratoma. A teratoma is a tumor made up of several different types of tissue, such as hair, muscle, teeth, or bone.[4] They typically form in the ovary, testicle, or tailbone and less commonly in other areas.[4] Symptoms may be minimal if the tumor is small.[2] A testicular teratoma may present as a painless lump.[1] Complications may include ovarian torsion, testicular torsion, or hydrops fetalis.[1][2][3] They are a type of germ cell tumor (a tumor that begins in the cells that give rise to sperm or eggs).[4][8] They are divided into two types: mature and immature.[4] Mature teratomas include dermoid cysts and are generally benign.[8] Immature teratomas may be cancerous.[4][9] Most ovarian teratomas are mature.[10] In adults, testicular teratomas are generally cancerous.[11] Definitive diagnosis is based on a tissue biopsy.[2] Types[edit] Mature teratoma[edit] A mature teratoma is a grade 0 teratoma. 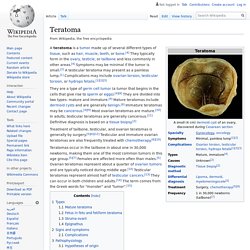 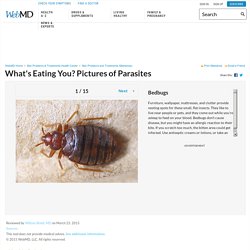 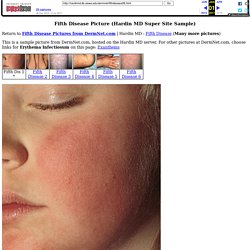 Brain Worms On CureZone Image Gallery. Brain Worms Photographs of a man in his 70s who was suffering from an unusual form of cancer which had eaten away at the upper portion of his skull and scalp but who had not sought any medical treatment because the condition was not causing him pain. 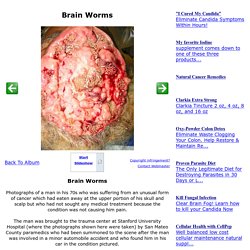 The man was brought to the trauma center at Stanford University Hospital (where the photographs shown here were taken) by San Mateo County paramedics who had been summoned to the scene after the man was involved in a minor automobile accident and who found him in his car in the condition pictured. Maggots can infest the human brain, and so can certain types of tapeworm larvae (pork tapeworm).