The simple image sharer. Eric Turner. Gaybros Development. Guidance on shaving... Down there NSFW : gaybros. Create an Account. Alan Turing. CHEST Study Reveals Penis Size Linked To Condom Usage. While one researcher concedes the findings are "politically volatile," a recent study of gay men in New York City shows the larger a man's penis is, the less likely he is to use a condom, Pink News reports. 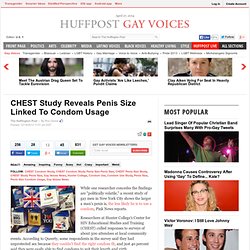 Researchers at Hunter College’s Center for HIV Educational Studies and Training (CHEST) culled responses to surveys of about 500 attendees at local community events. According to Queerty, some respondents in the survey said they had unprotected sex because they couldn't find the right condom fit, and just 40 percent said they were easily able to find condoms to suit their length and girth. While larger-sized condoms are available in stores, the one-size-fits-all variety are more readily available -- and often free from health clinics in New York City, the study found. But the findings are in line with a 2009 Indiana University study indicating that men were more likely to have "negative attitudes" about condom use if they had penises that were bigger or smaller than average. Gay BFF : craigslist tv ep 409. Faggot : gaybros. Gay History, Gay Art, Homosexual Mythology and Literature - World History of Male Love.

What are your opinions on Bisexuality? : gaybros. I am an early 30s something HIV+ bro, AMA : gaybros. Gay of the Week: Channing Tatum (and his penis) « Dancing With The Devil In The City of Angels. Chan and his penis’ spread in GQ “Channing Tatum’s penis is gross. 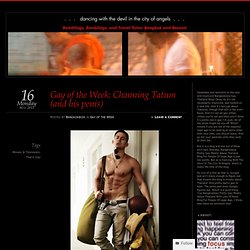 It looks like a hot dog that’s been left too long on the grill. The tip is hot-pink, singed, and shriveled. It appears angry. And it’s painful to view. Gay-Pride Parade Sets Mainstream Acceptance Of Gays Back 50 Years. WEST HOLLYWOOD, CA–The mainstream acceptance of gays and lesbians, a hard-won civil-rights victory gained through decades of struggle against prejudice and discrimination, was set back at least 50 years Saturday in the wake of the annual Los Angeles Gay Pride Parade. 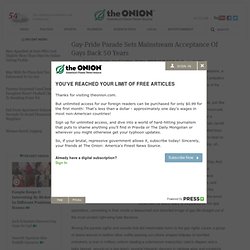 Participants in Saturday's Los Angeles Gay Pride Parade, which helped change straight people's tolerant attitudes toward gays. Lesbilicious » Attention lesbians: bisexuals are as much part of the LGBT community as you. In February 2012 the Open University published The Bisexuality Report: a comprehensive overview of the issues facing bisexual folks in the UK today, and the second of its kind in the world after a San Francisco group published the Bisexual Invisibility Report last year. 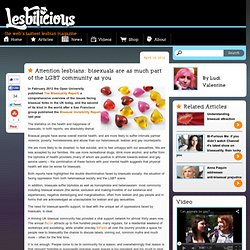 The statistics on the health and happiness of bisexuals, in both reports, are absolutely dismal. Bisexual people have worse overall mental health, and are more likely to suffer intimate partner violence, poverty, homelessness and abuse than our heterosexual, lesbian and gay counterparts. We are more likely to be closeted, to feel suicidal, and to feel unhappy with our sexualities. “But how many of there are you, really?” Against erasure and excuses, fighting for our lives. This rant’s from yours truly – on excuses I’m truly sick of, and the fight for your life and mine. – Cha-Cha A couple of articles ago, I linked to a report out of the UK on bisexuality. 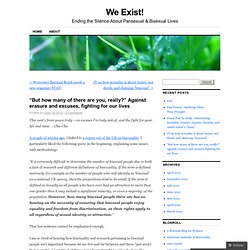 I particularly liked the following quote in the beginning, explaining some issues with methodology: “It is extremely difficult to determine the number of bisexual people due to both a lack of research and different definitions of bisexuality. Bisexual in a "Straight" Relationship: What's the point of coming out??? Ben Harvey: Carly Rae Jepsen: Post-Gay Pop Princess? In 3 minutes and 20 seconds, Carly Rae Jepsen's "Call Me Maybe" video accomplished more for the gay community than some gay-rights organizations have been able to do in years. 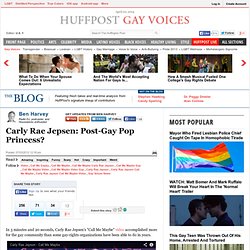 Pansexuality. The concept of pansexuality rejects the gender binary, the "notion of two genders and indeed of specific sexual orientations",[3] as pansexual people are open to relationships with people who do not identify as strictly men or women.[3][6] Etymology[edit] The prefix pan- comes from an Ancient Greek term meaning "all" or "every".

Omni- comes from a Latin term meaning "all". Pansexual is derived from the word pansexualism, dated back to 1917, which is the view "that the sex instinct plays the primary part in all human activity, mental and physical".[7][8] Credited to Sigmund Freud, it is a term of reproach leveled at early psychology,[7][8] and is also defined as "the pervasion of all conduct and experience with sexual emotions".[9] The conceptualization of pansexuality as distinct from pansexualism contrasts with predominant prefixes attached to the -sexual and -gender roots. Compared with bisexuality and other sexual identities[edit] The pansexual pride flag See also[edit] References[edit] 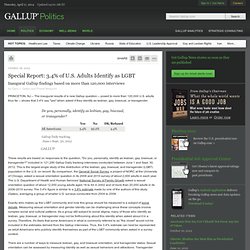 These results are based on responses to the question, "Do you, personally, identify as lesbian, gay, bisexual, or transgender? " included in 121,290 Gallup Daily tracking interviews conducted between June 1 and Sept. 30, 2012. This is the largest single study of the distribution of the lesbian, gay, bisexual, and transgender (LGBT) population in the U.S. on record. By comparison, the General Social Survey, a project of NORC at the University of Chicago, asked a sexual orientation question in its 2008 and 2010 survey of about 2,000 adults in each year.

The U.S. Exactly who makes up the LGBT community and how this group should be measured is a subject of some debate. Gallup: 4.6% of men 18-29 identify as gay, bisexual, or transgender : gaybros. I believe Every ones waited long enough. Subject: Gay Music : gaybros. Oh my fuck, I've slept with over 47 people. Possibly NSFW : gaybros.

The Psychology of Human Sexuality - 5 Myths About Homosexuality Debunked By Science. There are countless myths and stereotypes about gays and lesbians spanning everything from their mannerisms to their sex lives to the nature of their relationships. NoHomophobes.com. Gay Bathhouse Exposed! Bad first experience. : gaybros.