Intro Free Font. What distinguishes the new Intro free font from FontFabric is the strongly expressed geometric makeup and structure. 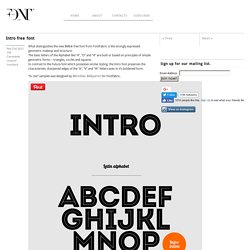 The basic letters of the Alphabet like “A”, “O” and “H” are built or based on principles of simple geometric forms – triangles, circles and squares. In contrast to the Futura font which possesses similar styling, the Intro font preserves the characteristic sharpened edges of the “А”, “V” and “W” letters even in it’s boldened form. Benton Sans® So you want to learn hand lettering? As a professor of Graphic Design, hand lettering is not only an integral part of my curriculum but also an important personal endeavor. 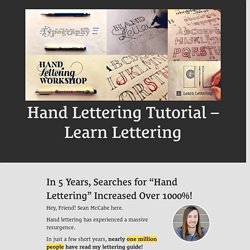 I am always looking for ways to improve both my own skill as well as classroom pedagogy, so I immediately signed up when I found Sean would be teaching a hand lettering workshop in Orlando, Florida. Sean's class was relaxed, fun, yet incredibly informative, providing knowledge in areas important for all skill levels.

Gratuit - 10 typographies tendances pour graphistes. 25 Free Comic Fonts to Use Instead of Comic Sans. Oh, Comic Sans, the font we all love to hate. 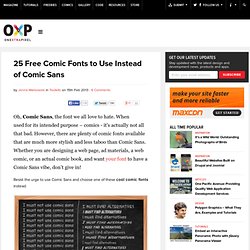 When used for its intended purpose – comics - it's actually not all that bad. However, there are plenty of comic fonts available that are much more stylish and less taboo than Comic Sans. Whether you are designing a web page, ad materials, a web comic, or an actual comic book, and want your font to have a Comic Sans vibe, don’t give in! Resist the urge to use Comic Sans and choose one of these cool comic fonts instead. Lisibilité et typographie web. Retour à l'accueil. 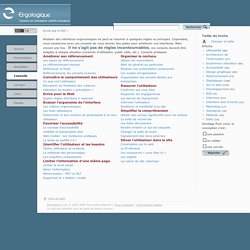 Font events: Controlling the flash of unstyled text. This is our second post in an ongoing series about using font events for better control over how web fonts load. 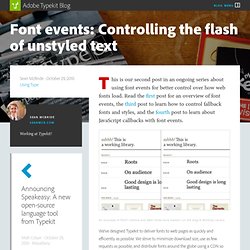 Read the first post for an overview of font events, the third post to learn how to control fallback fonts and styles, and the fourth post to learn about JavaScript callbacks with font events. An example of FOUT—before and after fonts have loaded—on the blog A Working Library. Pricing. CODE Pro. Code Pro is a font family inspired by the original Sans Serif fonts like Avant Garde or Futura, but with a modern twist. 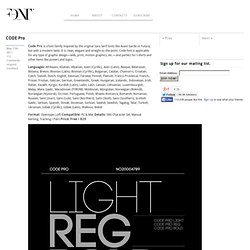 It is clean, elegant and straight-to-the-point. Code font is applicable for any type of graphic design—web, print, motion graphics, etc. 80 Beautiful Typefaces For Professional Design. Advertisement You don’t like to scroll? 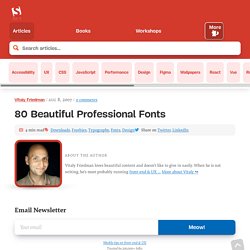 Be prepared. (We warned you.) Every now and again designers stumble upon the very same problem: the choice of a unique and beautiful typeface which manages to fulfill three basic tasks. Support the corporate identity, enrich the visual appearance and is compatible with the overall design. Which Are More Legible: Serif or Sans Serif Typefaces? Update March 2012 See my expanded critique of Colin Wheildon’s legibility research. 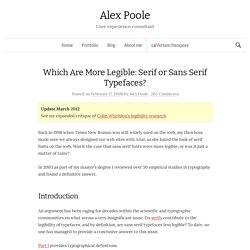 Back in 1998 when Times New Roman was still widely used on the web, my then boss made sure we always designed our web sites with Arial, as she hated the look of serif fonts on the web. Was it the case that sans serif fonts were more legible, or was it just a matter of taste? In 2003 as part of my master’s degree I reviewed over 50 empirical studies in typography and found a definitive answer. 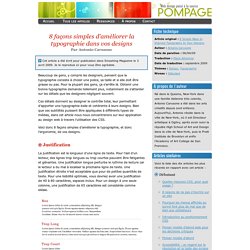 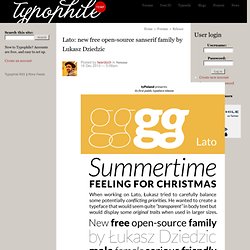 In December 2010 the Lato family was published under the open-source Open Font License by his foundry tyPoland, with support from Google. In the last ten or so years, during which Łukasz has been designing type, most of his projects were rooted in a particular design task that he needed to solve. Bree Serif for Free! - Special Content. Download Cabin Font. Impallari Type. The Cabin Font is a humanist sans inspired by Edward Johnston's and Eric Gill's typefaces, with a touch of modernism. Cabin incorporates modern proportions, optical adjustments, and some elements of the geometric sans. It remains true to its roots, but has its own personality. The weight distribution is almost monotone, although top and bottom curves are slightly thin. Counters of the b, g, p and q are rounded and optically adjusted. The curved stem endings have a 10 degree angle. Free. Car Fonts - Car Font Generator. Logo Fonts - Logo Font Generator.