Revealed: how the FBI coordinated the crackdown on Occupy 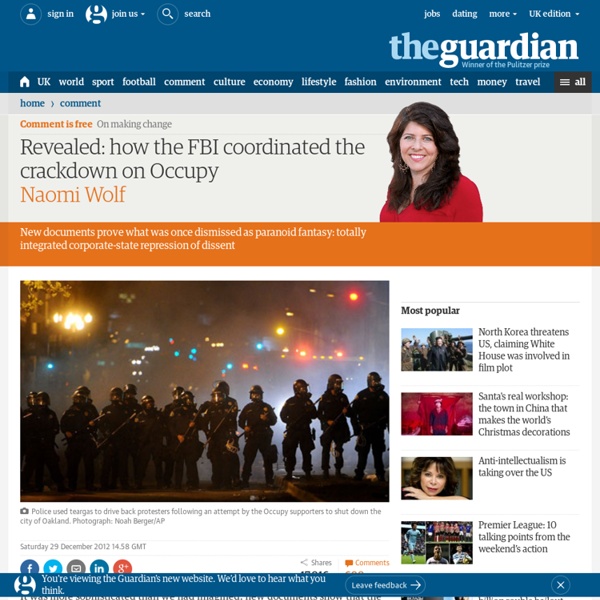 It was more sophisticated than we had imagined: new documents show that the violent crackdown on Occupy last fall – so mystifying at the time – was not just coordinated at the level of the FBI, the Department of Homeland Security, and local police. The crackdown, which involved, as you may recall, violent arrests, group disruption, canister missiles to the skulls of protesters, people held in handcuffs so tight they were injured, people held in bondage till they were forced to wet or soil themselves –was coordinated with the big banks themselves. The Partnership for Civil Justice Fund, in a groundbreaking scoop that should once more shame major US media outlets (why are nonprofits now some of the only entities in America left breaking major civil liberties news?) Verheyden-Hilliard points out the close partnering of banks, the New York Stock Exchange and at least one local Federal Reserve with the FBI and DHS, and calls it "police-statism":

Police bust up Capitol Hill 'dance party' protest -- UPDATE (Images: CHS) Using a heavy presence of uniformed officers on the street and with SWAT teams at the ready, Seattle’s East Precinct clamped down on an annual Pride weekend demonstration early Sunday morning, putting an end to the Capitol Hill march by hitting the crowd with pepper spray and taking six people into custody on E Madison. All details at this point are preliminary and have not been confirmed with SPD. According to police radio, six people were taken into custody and transported to the East Precinct headquarters at 12th and Pine. On a night when nearby streets were crowded with Pride beer gardens and thousands of revelers, a crowd of around 50 people marched onto E Pike and met a phalanx of Seattle police in riot gear in the 10th Ave intersection around 1a. In 2011, a much larger group roamed Pike/Pine and Broadway inflicting damage to windows, cars and walls. Seattle Fire was was called to the precinct to treat at least four people for pepper spray exposure.

Doug Fine: Can the Cannabis Economy Be Ecologically Sustainable? The future of sustainable cannabis agriculture might reside in the practices of a third-generation Emerald Triangle farmer known to his friends as Fuzzy. He indeed looked a good deal like Thorin Oakenshield. Based in Mendocino County, the 40-something's flowers are perennial top five finishers in California's Emerald Cup ("The World's Only Organic Outdoor Cannabis Competition"). When I asked him his secret on the soggy redwood-enshrouded Humboldt County deck outside this year's competition December 15, his answer was much more Gregor Mendel then Monsanto. "Local breeding and native soil. The guys that bring in bags of fake soil aren't ever going to win." "Organic outdoor cannabis is our brand," says Tim Blake, who founded and produces The Cup, as it's known regionally. Because of this isolation, prohibition, and now, cultural tradition, Northern California's remote Emerald Triangle is poised to provide a model for a sustainable post-prohibition cannabis industry.

FBI Investigated 'Occupy' As Possible 'Terrorism' Threat, Internal Documents Show According to internal documents newly released by the FBI, the agency spearheaded a nationwide law enforcement effort to investigate and monitor the Occupy Wall Street movement. In certain documents, divisions of the FBI refer to the Occupy Wall Street protests as a "criminal activity" or even "domestic terrorism." The internal papers were obtained by the Partnership for Civil Justice fund via a Freedom of Information Act Request. The fund, a legal nonprofit that focuses on civil rights, says it believes the 112 pages of documents, available for public viewing on its website, are only "the tip of the iceberg." "This production ... is a window into the nationwide scope of the FBI’s surveillance, monitoring, and reporting on peaceful protestors organizing with the Occupy movement," wrote Mara Verheyden-Hilliard, the fund's executive director, in a press release Saturday. The FBI did not immediately respond to The Huffington Post's requests for comment Sunday. Also on HuffPost:

Tim Carney: How corporate tax credits got in the 'cliff' deal Some tax lobbyists mostly ignored the August bill "because they thought it would be just a political document," one K Streeter told me. "They were the ones that got bit in the butt." Here's what happened: In late July, Finance Chairman Max Baucus announced the committee would soon convene to craft a bill extending many expiring tax credits. This attracted lobbyists like a raw steak attracts wolves. Former Sens. General Electric and Citigroup, for instance, hired Breaux and Lott to extend a tax provision that allows multinational corporations to defer U.S. taxes by moving profits into offshore financial subsidiaries. Liquor giant Diageo also retained Breaux and Lott to win extensions on two provisions benefitting rum-making in Puerto Rico. The K Street firm Capitol Tax Partners, led by Treasury Department alumni from the Clinton administration, represented an even more impressive list of tax clients, who paid CTP more than $1.68 million in the third quarter. But there never was a fight.

Four Pacific Northwest ports headed for possible labor clash December 22, 2012|Laura L. Myers and Teresa Carson | Reuters SEATTLE, PORTLAND, Oregon (Reuters) - Nearly 3,000 union dock workers at four Pacific Northwest ports began voting on Friday on a "final" contract offer presented by grain shippers, setting the stage for a possible labor clash should workers reject the proposal, as urged by union leaders. The potential stalemate has fueled speculation that the shipping companies might move to impose a lockout of union members and keep the grain terminals operating with replacement workers in the event management's offer fails to win approval. The U.S. Coast Guard said earlier this week it was preparing to establish buffer zones to keep union-related protests from interfering with navigation around two of the ports in question. The International Longshore and Warehouse Union (ILWU) said it expects to announce results of the vote on Monday. The union dock workers at those six terminals have been without a contract since September 30.

The South's Shocking Hidden History: Thousands of Blacks Forced Into Slavery Until WW2 January 15, 2013 | Like this article? Join our email list: Stay up to date with the latest headlines via email. On July 31, 1903, a letter addressed to President Theodore Roosevelt arrived at the White House. The sender was a barely literate African American woman named Carrie Kinsey. Kinsey had already asked for help from the powerful white people in her world. Confronted with a world of indifferent white people, Mrs. “Mr. Considered more than a century later, her letter courses with desperation and submerged outrage. As dumbfounding as the story told by the Carrie Kinsey letter is, far more remarkable is what surrounds that letter at the National Archives. “i have a little girl that has been kidnapped from me … and i cant get her out,” wrote Reverend L. A farmer near Pine Apple, Alabama, named J.

Public manipulation by the mainstream media One week has passed since a small protest took place during a Remembrance Day ceremony outside of Old City Hall in Toronto. On this day, two Afghan-Canadian peace activists, Laila Rashidie and Suraia Sahar, were in attendance with a banner to remember Afghans killed by Canadian troops. These two women did not attend the ceremony with an intent to cause a disruption. I contacted one of the women involved and asked Laila several questions about the incident. You can read her responses [ HERE ]. Laila and Suraia with their banner outside Nathan Phillips Square. It is important to note that there were two other small protest groups in attendance. Police initially became aggressive with the anti-fascism group and confiscated their banner. Derek Soberall was standing next to the protest groups and began filming the confrontation with his cell phone. Several men attending the ceremony then approached the protesters. White haired man and Logan (from Paris, Ontario) assaulting a protester.

The Untouchables: How the Obama administration protected Wall Street from prosecutions | Harry J Enten (updated below - Update II) PBS' Frontline program on Tuesday night broadcast a new one-hour report on one of the greatest and most shameful failings of the Obama administration: the lack of even a single arrest or prosecution of any senior Wall Street banker for the systemic fraud that precipitated the 2008 financial crisis: a crisis from which millions of people around the world are still suffering. What this program particularly demonstrated was that the Obama justice department, in particular the Chief of its Criminal Division, Lanny Breuer, never even tried to hold the high-level criminals accountable. What Obama justice officials did instead is exactly what they did in the face of high-level Bush era crimes of torture and warrantless eavesdropping: namely, acted to protect the most powerful factions in the society in the face of overwhelming evidence of serious criminality. "In 2009, Wall Street bankers were on the defensive, worried they could be held criminally liable for fraud.

Sadie's Dream For The World TransGriot Note: While the GL community was justifiably jumping up and down excited because President Obama mentioned them in his second inaugural address, an 11 year old transkid in the western US was writing her own essay on this inaugural day that also happened to fall on MLK, Jr Day. Sadie's essay highlights who we adult transpeople are really fighting for when we push for trans human rights here in the United States and around the world. Let's redouble our efforts to make trans human rights a reality for Sadie Croft and ourselves. Sadie's Dream for the World. "The world would be a better place if everyone had the right to be themselves, including people who have a creative gender identity and expression. Transgender kids like me are not allowed to go to most schools because the teachers think we are different from everyone else. When they grow up, transgender adults have a hard time getting a job because the boss thinks the customers will be scared away.

The Nefarious Ways 9-11 Turned America into a Lockdown State February 5, 2013 | Like this article? Join our email list: Stay up to date with the latest headlines via email. To stay on top of important articles like these, sign up to receive the latest updates from TomDispatch.com here. Consider Inauguration Day, more than two weeks gone and already part of our distant past. One subject, at least, got remarkably little attention during the inaugural blitz and, when mentioned, certainly struck few as odd or worth dwelling on. Here’s how NBC Nightly News described some of the security arrangements as the day approached: “[T]he airspace above Washington... Consider just the money. Maybe it's time to face the facts: this isn’t your grandfather’s America. Making Fantasy Into Reality Bin Laden, of course, is long dead, but his was the 9/11 spark that, in the hands of George W.