Up with Chris Hayes 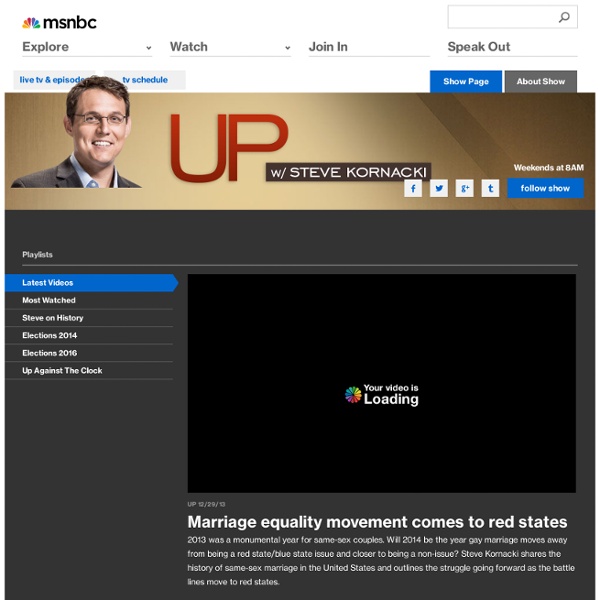 now playing Dissecting the notion of ‘Deporter-in-Chief’up next Can damage with Latino community be repaired? Will GOPers pivot away from anti-ACA message? Can ACA change voters’ minds in red states? Headlines making the news ‘This was torture by anybody’s definition’ Can public opinion on torture change? Relationship between late night and politics The politics of late night television The future of late night Another signal detected in MH370 search A benchmark week in health care reform Is 2016 the next battleground in ACA fight? Lis Smith: Sexism in Christie report

The Melissa Harris-Perry Show now playing Can ‘swagger-challenged’ Dems flip the House?up next GOP candidate flips the script Can more voters be mobilized for midterms? Key midterm races to keep an eye on Residents look to exit diversifying community A model of success for integrated communities Has America made progress on fair housing? How race can affect the very air you breathe Immigration hunger strike rolls on Troubling behavior some girls see as ‘normal’ Is sexual harassment a new normal for girls? The economic fairness for women workers The Ed Show now playing Welfare cowboy continues freeloading crusadeup next Does US census bureau skew Obamacare data? Keep the Green Bay Packers in the union Talk about race sets off a firestorm of hate Stuck in the old days, against women’s rights That’s not ‘easy,’ at least not for unions Freeloading off government he won’t recognize Republicans investigate validity of ‘shoe-gate’ House approval ratings have 2014 implications Ohio ‘secretary of suppression’ keeps it up A blurred picture is worth a thousand words Badgering the government into secession Meet the new, hip Republican Party For 2014 wins, Dems must defend Obamacare Summertime in North Country beats NYC The impacts of race in 21st century politics Marsha Blackburn jumps on the 2016 bandwagon Is Jeb Bush not conservative ‘enough?’ Radical right fear the future of... comedy? Big donors’ influence on local elections

The War Room with Jennifer Granholm The Young Turks with Cenk Uygur To Our Faithful Current.com Users: Current's run has ended after eight exciting years on air and online. The Current TV staff has appreciated your interest, support, participation and unflagging loyalty over the years. Your contributions helped make Current.com a vibrant place for discussing thousands of interesting stories, and your continued viewership motivated us to keep innovating and find new ways to reflect the voice of the people. We now welcome the on-air and digital presence of Al Jazeera America, a new news network committed to reporting on and investigating real stories affecting the lives of everyday Americans in every corner of the country. You can keep up with what's new on Al Jazeera America and see this new brand of journalism for yourself at Thank you for inspiring and challenging us. – The Current TV Staff