Men. - tomeyzaguirre. 16 girls, 16 stories of resistance. How the Latest Great Migration Is Reshaping Europe. Bronx Documentary Center “Whose Streets? Our Streets!” - The Atlantic. A new exhibition captures the rallies, riots, marches, and demonstrations that erupted in New York City between 1980 and 2000. 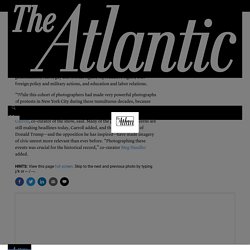 Entitled “Whose Streets? Our Streets!” The current show at the Bronx Documentary Center explores residents’ reactions to two decades of swift economic and demographic change. New Exhibition: <i>Whose Streets, Our Streets! New York City: 1980-2000</i> Captures Two Decades of Political Protest in NYC — Humble Arts Foundation. About the Curators: Meg Handler is Editor at Large for Reading The Pictures. 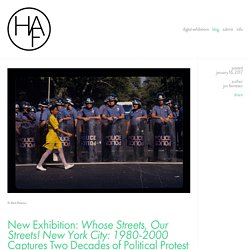 She is the former photo editor of The Village Voice. Following The Voice, Meg worked at U.S. News & World Report, Blender, New York Magazine, COLORS and Polaris Images. She has edited a number of books, including the monograph, Phil Stern: A Life’s Work, PAPARAZZI by Peter Howe, Mad World: An Oral History of New Wave Artists and Songs That Defined the 80’s, and DETROIT UNBROKEN DOWN by Dave Jordano. Tamar Caroll is an Assistant Professor of History at Rochester Institute of Technology and the Program Director of Digital Humanities and Social Sciences, an interdisciplinary undergraduate degree co-sponsored by the College of Liberal Arts, the College of Imaging Arts and Sciences, and the B.

Michael Kamber has worked as a journalist for more than 25 years. In 2011, he founded the Bronx Documentary Center, an educational space dedicated to education and social change through photography and film. On The Eve Of Trump’s Inauguration, This Exhibition Of Protest Photography Is As Fresh As Ever - Culture. How exactly should one photograph a political demonstration? 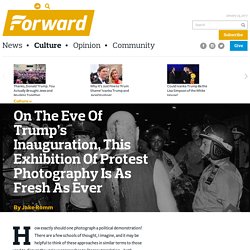 There are a few schools of thought, I imagine, and it may be helpful to think of these approaches in similar terms to those used to discuss the various approaches to literary translation – both translators and photographers work across languages in order to best make a work intelligible to different audiences. In the case of the photographer, the translation occurs across mediums instead of languages. The political photographer must take an act of public theater (protests don’t just employ the theater as a means of advancing political programs; protests are themselves a type of performance), and turn the transitory into the concrete, that is, into an object that may be reproduced, disseminated, and dissected.

In other words, the photographer must translate the protest into an image in order to make it intelligible to those who were not present. So what are the possible approaches? Consider this image by Corky Lee: These Powerful Photos Prove Why Protests Have Always Been Central To NYC’s Identity. LISA KAHANE: In my time, protest photos only made it into mainstream media if there was blood, arrests, or critical mass. 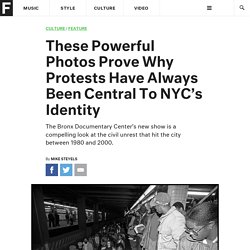 But a lot of us went out and photographed it just because it was history, regardless of whether they saw the light of day. Now people can just put it on social media. It’s important to. Wherever your heart leads you, shoot it and archive it. I earned money as a studio photographer, the work I did in the streets was personal work that I believed in. Looking at the past offers hindsight on what was done best or could've been done differently. I draw a line between vandalism and protest. Emotion is one of the things that photography is great for. VISIT US. Our current exhibition is ‘Whose Streets? 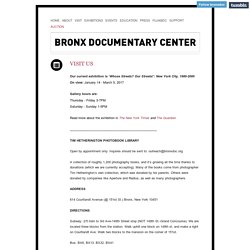 Before social media gave everyone a soapbox, the years from 1980 to 2000 were a golden age for New Yorkers taking to the streets to make their voices heard on issues like abortion rights, AIDS research, gentrification, killings by police officers and the first Gulf War. 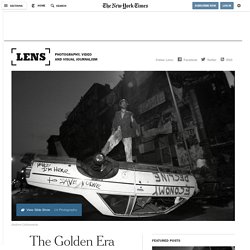 This was the last period when demonstrators could march relatively freely in New York without being restricted by metal police barriers, and the last time photographers moved so freely among them. More than 100 images from those diverse demonstrations are gathered in a new exhibit called “Whose Streets? Our Streets! : New York City 1980-2000″ at the Bronx Documentary Center, a nonprofit educational space and gallery co-founded in 2011 by Michael Kamber, who has photographed extensively for The New York Times. The exhibit, which features work by 38 photographers, will be on display until March 14, with a multimedia companion exhibit online.