Life on Purpose: 15 Questions to Discover Your Personal Mission 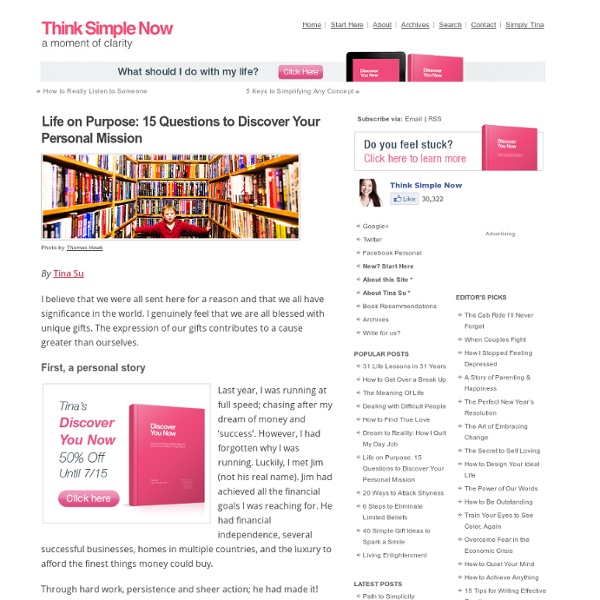 How to Love Consciously : The BridgeMaker The way to love anything is to realize that it might be lost. – Gilbert Chesterton Knowing how someone wants to be loved and then providing that love are two separate things. Sometimes marriages and other relationships end because either one person does not understand how to love or meet the needs of the other; or one partner refuses to meet the needs of the other. To love consciously is a choice. Mary Beth and I often say being married is very similar to having another full-time job – you get out of it what you put into it. Our marriage is like a savings account. Yes, we argue over the temperature in the car or who really forgot to feed the dog, but when it really matters; when it really counts, we make the conscious choice to give each other the love that is requested and needed. With over 23 years of marriage under our belts, we have found the following strategies work best to love intentionally; to love authentically and to love consciously. Show Appreciation Be Happy, Not Right

Children’s hospital doctor on duty playing games, 5-month-old baby dies Key | November 12th, 2009 [NetEase] November 5, 2009 afternoon, a tragedy happened in a Children’s hospital, but we the common people will not see it in today’s newspapers or from major media. It’s not that we didn’t ask for help, but there was no one helping us. Posting this in hope of friends in the society can support us, to make people responsible at the hospital step up, to make the major media step up including our beloved 110 (police) also step up. The incident: (The victim is my friend, the following is written by my friend to his lawyer, please patiently read on) November 1, 2009 Baby had a fever. November 3, 2009 we took feverish Baby to Nanjing Children’s Hospital and signed in for urgent care. Around 11 am, we gave the documents to the ophthalmologist and registered to stay in 14th floor bed number 45. Close to noon, the doctor told us to take Baby for an eye CT, and said will take appropriate treatment action according to the result. Security that beat us Our baby

Top 100 Free eBooks for Business Students and Entrepreneurs | Best Online Colleges Whether you’re enrolled in a business school degree program or desperate for a review of b-school basics as you start your own company, it’s hard to pass up free study materials. These 100 ebooks on marketing, management, ecommerce, and finance are all free and worth checking out. Basic Business These foundational courses focus on basic business skills like earning money, understanding your relationship with the customer, and more. Management Become a better manager with these courses, which cover topics in psychology, change management, and more. E-commerce and Internet Marketing Review the cutting edge techniques necessary to master online business. 3 Vital Steps to KickStart Your Web Business: Daniel Sudhakar’s book helps you "avoid all the mistakes that start-ups make." Finance Here you can review accounting, investments and other business finance guides. Budget Breeze: Learn new budgeting strategies for your business. Human Resources Marketing and Advertising International Business Economics

Profits Before People: 7 of the World’s Most Irresponsible Companies This article originally appeared on EarthFirst.com. Money isn’t everything – or is it? To most corporations, making a profit is goal number one – but some of those companies take it way too far, sacrificing the health of the planet and its inhabitants for a bigger bank balance. Far too many corporations turn a blind eye to the consequences of their destructive, exploitative practices. The worst of them are committing atrocities that go beyond the realm of objectionable into criminal, dumping toxic chemicals without regard to public health and employing child labor. What makes these seven companies extra evil is the fact that they’ve committed crimes that are BOTH environmentally and socially irresponsible. Nestle Image via Blood in Your Coffee More than 40% of the world’s chocolate comes from Côte d’Ivoire (the Ivory Coast) in Africa, where tens of thousands of children are estimated to be working in dangerous conditions on cocoa farms. Pfizer Wal-Mart Image via Brave New Films ExxonMobil

Family Food Consumption... By Country I like how the Italian family's favorite food is frozen fish sticks, and the American family's favorite food is spaghetti! Human World Human World The women of the Tiwi tribe in the South Pacific are married at birth. When Albert Einstein died, his final words died with him. The nurse at his side didn't understand German. St Patrick, the patron saint of Ireland, was not Irish. The lance ceased to be an official battle weapon in the British Army in 1927. St. Many sailors used to wear gold earrings so that they could afford a proper burial when they died. Some very Orthodox Jew refuse to speak Hebrew, believing it to be a language reserved only for the Prophets. A South African monkey was once awarded a medal and promoted to the rank of corporal during World War I. Born 4 January 1838, General Tom Thumb's growth slowed at the age of 6 months, at 5 years he was signed to the circus by P.T. Because they had no proper rubbish disposal system, the streets of ancient Mesopotamia became literally knee-deep in rubbish. The Toltecs, Seventh-century native Mexicans, went into battle with wooden swords so as not to kill their enemies.

Turtle found that pooped plastic for a month As the world's experts on plastic pollution gather this week in Honolulu for the Fifth International Marine Debris Conference, a disturbing new report has been released that chronicles what decades of plastic pollution in our oceans has done to sea turtles. The turtle was rescued in 2009 after marine biologists in Melbourne Beach, Fla., noticed that it seemed to be having problems digesting food. After dislodging a large piece of plastic from the animal's gastrointestinal tract, the turtle proceeded to defecate 74 foreign objects over the next month. Some of those objects included four types of latex balloons, five different types of string, nine different types of soft plastic, four different types of hard plastic, a piece of carpet-like material, and two large tar balls. Though this turtle was rescued, it is representative of a growing problem for sea turtles around the world, creatures that easily mistake plastics for food items like jellyfish.

The Dalai Lama’s 18 Rules For Living May 6, 2011 | 42 Comments » | Topics: Life, List At the start of the new millennium the Dalai Lama apparently issued eighteen rules for living. Since word travels slowly in the digital age these have only just reached me. Take into account that great love and great achievements involve great risk. via OwenKelly Hot Stories From Around The Web Other Awesome Stories