ONC Updates EHR Usability, Health IT Patient Safety Guides. Uk.businessinsider. I am a physician-scientist in the Division of Neonatal-Perinatal Medicine at Columbia University Medical Center. 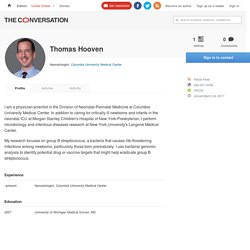 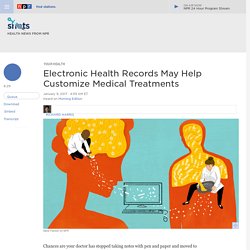 That is supposed to help coordinate your care. Increasingly, researchers are also exploring these computerized records for medical studies and gleaning facts that help individual patients get better care. Computerized medical records are hardly new. Transformation: When your therapist is a piece of software - Modern Healthcare Transformation Hub. In 2014, Milwaukee-based Froedtert & the Medical College of Wisconsin health network, which operates three hospitals in eastern Wisconsin, saw its standard way of delivering behavioral health services wasn't enough to meet the demand. 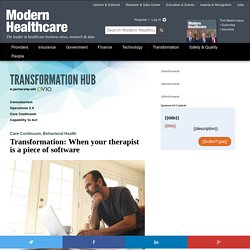 Patients with mild-to-moderate mental health issues would receive a referral to get one-on-one visits with a psychiatrist or psychologist. Froedtert also recognized that many of its patients who were having difficulty managing chronic illnesses like heart disease and diabetes were also having issues with depression and anxiety. “We realized that a lot of people that were struggling with chronic disease also had a mental health co-morbidity,” said Michael Anderes, vice president for Digital Health for Froedtert & MCW health network. 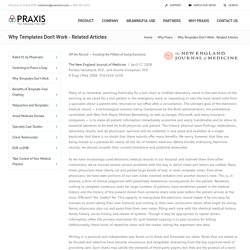 Well-intended physicians are being victimized when audits reveal their EHRs have allowed non-compliant claims. Audited practices have been fined between $50,000 and $175,000 per physician for their inadvertent infractions. Today's political and economic environment has focused a spotlight on healthcare reform and the promotion of health information technology in particular. The Obama administration has promised to invest $10 billion per year over the next five years on HIT, including electronic health records.

Design Thinking Can Help Improve Care for the Elderly. By 2050, the number of Americans over age 65 will more than double. 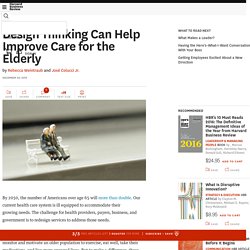 Our current health care system is ill equipped to accommodate their growing needs. The challenge for health providers, payers, business, and government is to redesign services to address those needs. In response, the tech community is creating an abundance of devices to monitor and motivate an older population to exercise, eat well, take their medications, and live more engaged lives. But to make a difference, these products must be integrated into the daily lives of the population and the daily workflow of health care providers.

How Machines Can Help Track Depression. It might not be until something seems off that you realize you’re paying attention to the tiniest twitches and scrunches of another person’s face. 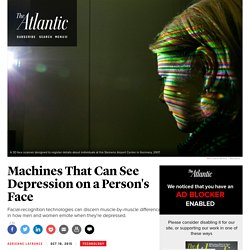 Humans are hardwired to catalogue and interpret minuscule clues about emotion this way. We find meaning in broken eye contact, a passing brow crinkle, the pause that goes on a beat too long. But how good are people, generally, at discerning how others feel based on the faces they’re making? In 1872, Charles Darwin laid out a case for the universality of key facial expressions in his book, The Expression of Emotions in Man and Animals. An Overburdened Physician System Is Yet Another Obstacle To Getting Wearables To Those Who Need Them. The intersection of healthcare & computer science. While we’ve heard plenty about the computerization of medical records, what you might not have realized is how many other ways computer science is making the field of medicine more efficient than ever before. 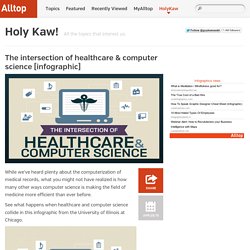 See what happens when healthcare and computer science collide in this infographic from the University of Illinois at Chicago. Via UIC. The latest information in infographics. Why We Must Keep Track of Errors in Electronic Medical Records. The first visit to a new doctor usually starts with yet another recitation of medical history. 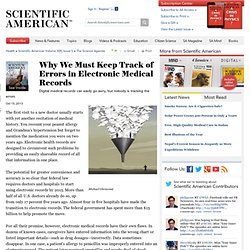 You recount your peanut allergy and Grandma's hypertension but forget to mention the medication you were on two years ago. Electronic health records are designed to circumvent such problems by providing an easily shareable record of all that information in one place. The potential for greater convenience and accuracy is so clear that federal law requires doctors and hospitals to start using electronic records by 2015. More than half of all U.S. doctors already do so, up from only 17 percent five years ago. Almost four in five hospitals have made the transition to electronic records. 7 steps for developing an effective eHealth strategy.

Very few health organizations or geographic regions have a proper strategy for the implementation of eHealth, despite evidence that technology's role in healthcare continues to grow, according to research published this week in the Journal of Internet Medical Research. 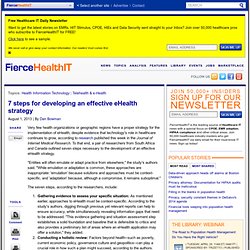 To that end, a pair of researchers from South Africa and Canada outlined seven steps necessary to the development of an effective eHealth strategy. "Entities will often emulate or adapt practice from elsewhere," the study's authors said. "While emulation or adaptation is common, these approaches are inappropriate: 'emulation' because solutions and approaches must be context-specific, and 'adaptation' because, although a compromise, it remains suboptimal.

" The seven steps, according to the researchers, include: Hospitals undergoing massive surgery to adapt to changing patient needs. Health care is under enormous strain and many experts fear the situation will only get worse as demands on the system rise. 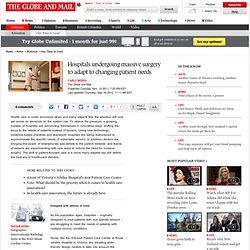 To relieve the pressure, a growing number of hospitals are reinventing themselves in innovative ways, shifting the focus to the needs of patients instead of doctors. Using new technology, evidence-based practices and teamwork, hospitals are being restructured to accommodate the specific needs of vulnerable seniors. In addition, doctors are bringing the power of smartphones and tablets to the patient bedside, and teams of experts are experimenting with new ways to reduce the need for invasive surgery. The shift to patient-focused care is a move many experts say will define the next era of health-care delivery. Designed with seniors in mind As the population ages, hospitals – originally designed to treat patients with one specific ailment – are struggling to meet the needs of patients with multiple chronic conditions.

Personal Technology: A Diabetic Meter That Talks to iPhones and Doctors. Wirelessly enabling the long-distance house call. When Sandra Rouhi found out she carried a gene that put her at a high risk for developing breast cancer, she opted for a bilateral mastectomy, and then reconstructive surgery. Twenty-four hours after that operation, she was recovering in the comfort of her home, armed with a smartphone, which her surgeon asked her to use to take pictures of her breasts. It was so easy to do, her two young children often helped take photos of the incision. When a lumpy bruise appeared at the surgical site four weeks later, she worried she wasn’t healing properly and sent a picture to her surgeon, John Semple, who was halfway across the world on a vacation and research trip in Nepal.