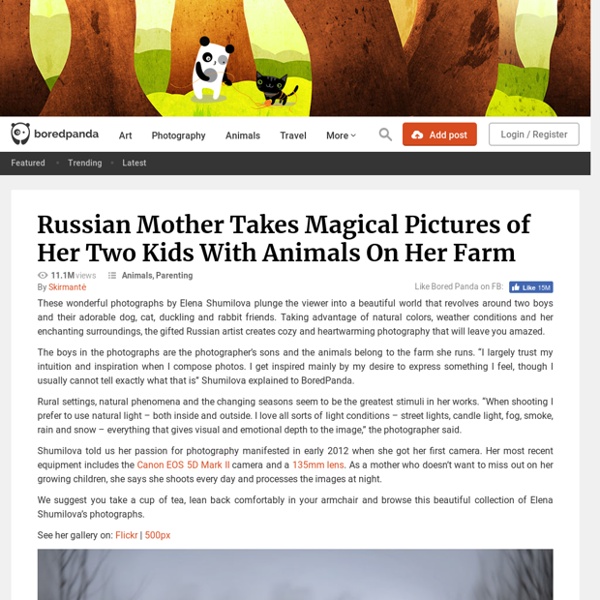 These wonderful photographs by Elena Shumilova plunge the viewer into a beautiful world that revolves around two boys and their adorable dog, cat, duckling and rabbit friends. Taking advantage of natural colors, weather conditions and her enchanting surroundings, the gifted Russian artist creates cozy and heartwarming photography that will leave you amazed. Show Full Text The boys in the photographs are the photographer’s sons and the animals belong to the farm she runs. “I largely trust my intuition and inspiration when I compose photos. I get inspired mainly by my desire to express something I feel, though I usually cannot tell exactly what that is” Shumilova explained to BoredPanda. Rural settings, natural phenomena and the changing seasons seem to be the greatest stimuli in her works. Shumilova told us her passion for photography manifested in early 2012 when she got her first camera. See her gallery on: Flickr | 500px “Children and animals – it’s my life.

25 Stunning Portraits of Black Women in Fantasy Photography Fantasy photography is a captivating genre. It allows us to get lost in another world—one of ethereal characters, amazing costuming, and breathtaking settings. But if you’ve spent any time admiring these surreal works, you might’ve noticed that they predominantly feature white people. Black women are often left out of the spotlight, even though they, too, are creating stunning images worthy of praise. Twitter user @btsanima is helping to call attention to Black women appearing in fantasy photography. melanie ferguson is monday’s muse I’ve been waiting a long time for ceramic artist Melanie Ferguson’s website to go live. Her work is astounding and I’ve been itchy to share. It’s up.

courtney jade’s blog It’s the holly jolliest time of the year again, and my bestie Jessica of Modern Moments Designs and I teamed up to do a Rustic Woodland Holiday styled session displaying lots of fun gift ideas! We are lucky enough to live in beautiful Portland, OR, where we are spoiled with an abundance of amazing local gourmet shops. I highly recommend any and all of these places if you are a local north-westerner, but if you are not, take our ideas and run with them in your own city! So, what do you get the person who “has everything” for Christmas?! Treats of course! German Shepherd Ciccio Attends Italian Church Of Santa Maria Assunta Mass Daily As He Mourns Late Owner Maria Lochi (PICTURES) A dog whose owner died two months ago visits the church where her funeral was held every day in the hope she will return. Ciccio, a 12-year-old German Shepherd, attends Mass at the church of Santa Maria Assunta in San Donaci, Puglia, every day. According to Sud Italia News, the grieving hound mourns daily for Maria Lochi, his former owner who was known in the area for her love of animals.

10 Pics Of People Before And After They Were Asked To Smile (New Pics) The Dalai Lama said, "A simple smile. That’s the start of opening your heart and being compassionate to others." Smiles have the ability to change one's whole day, and not only to the one that's smiling, but also to those who see a smile. It's just a simple expression, and yet it may be the most powerful, as it's the most positive one. Jay Weinstein tests this idea in his project "so I asked them to smile" with an extremely diverse group of people, and the answer behind each and every one of his pictures is that a smile changes everything—not only the mood, but even the whole picture. Photo Hoarding Columns Tuesday, November 26, 2013 By Bill Hatcher

R.I.P Chuppy: These Adorable Photos Will Always Remind Us Of Chuppy The Golden Retriever Although Chuppy the majestic golden retriever passed away just week ago, his memory will live on in these beautiful pictures taken by his owner, Jessica Trinh. They are so popular that even rapper Snoop Dogg posted one of the photos on his Instagram. All the pictures below were shot when Jessica was 17-18 years old, which goes to show just how talented this young photographer is.

Impressive Portraits Of Indigenous Tribes Photographed By Alexander Khimushin During His 3year Project in Siberia Currently living in Australia the Russian ethnographic photographer Alexander Khimushin traveled to more than 80 countries where he implemented different projects of photographing vanishing cultures. One of his recent projects is the “World in Faces” where he portrayed indigenous people and their impressive and inspiring traditions. Encountering these people makes his trips more interesting and motivates to new discoveries and projects.

Hasselblad unveils its 2014 Masters Held every two years, the Hasselblad Masters competition is open not only to users of medium or large format cameras but also to active professionals with more than three years of experience using cameras that offer resolutions of 16MP or above. This year, Hasselblad received more than 4000 entries from which 12 Masters were selected, each in their own categories. The winners are: