Where women rule: the last matriarchy in Europe – in pictures 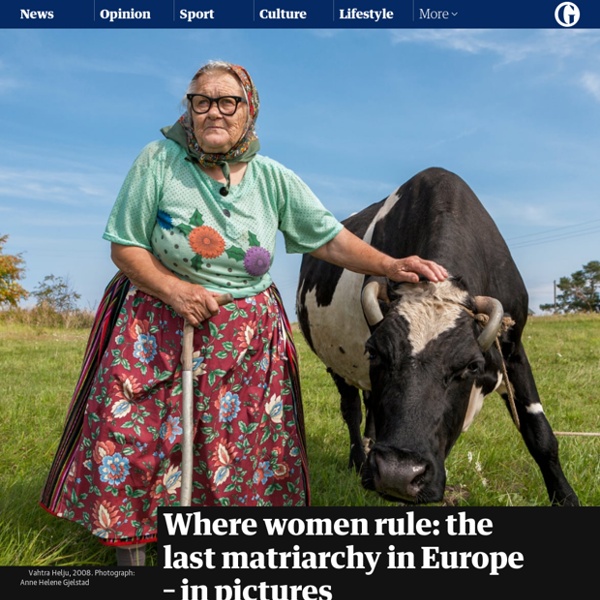 25 Stunning Portraits of Black Women in Fantasy Photography Fantasy photography is a captivating genre. It allows us to get lost in another world—one of ethereal characters, amazing costuming, and breathtaking settings. But if you’ve spent any time admiring these surreal works, you might’ve noticed that they predominantly feature white people. Black women are often left out of the spotlight, even though they, too, are creating stunning images worthy of praise. Twitter user @btsanima is helping to call attention to Black women appearing in fantasy photography. In a viral Twitter thread, she implores people to share their favorite fantastical images of Black women, stating, “Even though our presence is small, I will not be deterred.”

10 Pics Of People Before And After They Were Asked To Smile (New Pics) The Dalai Lama said, "A simple smile. That’s the start of opening your heart and being compassionate to others." Smiles have the ability to change one's whole day, and not only to the one that's smiling, but also to those who see a smile. It's just a simple expression, and yet it may be the most powerful, as it's the most positive one. Jay Weinstein tests this idea in his project "so I asked them to smile" with an extremely diverse group of people, and the answer behind each and every one of his pictures is that a smile changes everything—not only the mood, but even the whole picture. His pictures also show that a smile is unique to every individual and that it's sometimes hard to know how beautiful they look when they smile until they do.

Impressive Portraits Of Indigenous Tribes Photographed By Alexander Khimushin During His 3year Project in Siberia Currently living in Australia the Russian ethnographic photographer Alexander Khimushin traveled to more than 80 countries where he implemented different projects of photographing vanishing cultures. One of his recent projects is the “World in Faces” where he portrayed indigenous people and their impressive and inspiring traditions. Encountering these people makes his trips more interesting and motivates to new discoveries and projects. Last three years, the photographer devoted to exploring tribes in Siberia, most of which are at the edge of vanishing.

Beautiful Dog Portraits Capture Their Adventures in the Great Outdoors This post may contain affiliate links. If you make a purchase, My Modern Met may earn an affiliate commission. Please read our disclosure for more info. Pet Pig Grows up with Dogs and Thinks He's Just Like His Canine Crew As the old saying goes, “a dog is a man’s best friend,” but this pet pig might disagree. Meet Chowder, the 6-year-old Vietnamese potbellied pig who has his own group of unlikely animal friends. The domesticated farm animal lives with five rescue pups—named Rika, Slick, Nya, James, and Bashe—and his human, Shelby Madere, in Southern California. (Altogether, they make up @piggypoo_and_crew.)

Polish Photographer Captures The Unique Beauty Of Local People Of India – Earth Wonders A Polish photographer has sent the internet wild with her beautiful portraits of locals in India. Magdalena Bagrianow who’s originally from Żoliborz in Warsaw traveled to the South Asian continent to explore the country and discover its traditions. Photographer Magdalena Bagrianow had spent months in India capturing portraits of its people showcasing just how unique and beautiful they are. The portraits are very powerful, bursting with emotions in each frame. While exploring South Asia, the photographer was learning more and more about traditions and local people. Portraits of Thomas Jefferson's Sixth Great Grandson Strikes a Chord Thomas Jefferson For the past 15 years, photographer Drew Gardner has been bridging past and present through his ongoing project titled The Descendants. For this innovative photo series, Gardner has been tracking down the living relatives of history's greatest figures and photographing them as they take on the guise of their ancestors. Most recently, the project has garnered a new wave of attention after the dedicated photographer worked with Smithsonian Magazine to photograph the descendants of Thomas Jefferson, Frederick Douglass, and Elizabeth Cady Stanton.

Leila Jeffreys' Elegant Bird Portraits Show Feathery "High Society" The Tweets Photographer Leila Jeffreys holds intimate portraiture sessions with her intriguing, colorful muses: cockatoos, doves, and hawks. The Sydney-based artist began her avian projects a decade ago by photographing the colorful budgerigars of her childhood memories. Jeffrey's most recent series is entitled High Society and marks a return to her original feathery subjects. The series explores the flock as a community, and the relationships between the budgerigars are on magnificent display.

Photographer Uses 160-Year-Old Camera Equipment to Create Beautifully Haunting Portraits Many photographers are excited to utilize the latest and greatest camera technology, but Giles Clement likes to keep things classic. The Nashville-based creative produces dramatic portraiture with equipment that was made more than 160 years ago, as he describes, “from an era when cameras were made by craftsmen in small shops and lenses were designed using slide rules, experience and feel.” These devices have their own technological shortcomings, but that’s precisely why Clement likes them. “The inherent flaws of these instruments lend themselves perfectly to my view of a beautifully imperfect world.” Clement’s photographic approaches include tintype and its sister process, the ambrotype. Photographer Shares Meaning Behind His Portraits of Native Americans Larry Photographer Craig Varjabedian is known for his stunning portrait series celebrating the lives and cultures of Native Americans. The Native Light Photo Collaboration project sees Varjabedian working with Indigenous people around New Mexico to create photographs that highlight their spirit. By working together, photographer and model have equal control and, therefore, the images avoid the exploitation that can sometimes occur in this genre of photography. Varjabedian works closely with each Native American who sits for a portrait. Together, they find what works in order to tell the story of the individual's cultural identity.

Photographer Documents the Unique People He Sees at the Airport The airport is a prime location for people watching. There, you see folks from all walks of life in various states of being; some are rushing to their gate while others are killing time until they board their plane. For photographer Mustafa Çankaya, working at the Atatürk airport has given him more than just an opportunity to watch people from all over the world. It's been the impetus for his ongoing project called 100 Faces 100 Countries. “I see thousands of different faces passing by every day, from every culture and every part of the world,” Çankaya writes.