Chronicling America. Shifted Maps. Embed A Google Map Into Your Website Or Blog. Trans-Atlantic Slave Trade. Animated interactive of the history of the Atlantic slave trade. Source: slavevoyages.org For the full interactive version, use a larger device.

There are a few trends worth noting. In the 1700s, however, Spanish transport diminishes and is replaced (and exceeded) by British, French, Dutch, and—by the end of the century—American activity. Enroll now in a different kind of summer school. Vintage-Greece. Historical Photo Mapping. There's nothing I enjoy more than exploring historical maps and vintage photos. 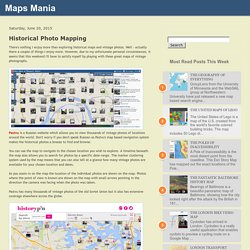 Well - actually there a couple of things I enjoy more. However, due to my unfortunate personal circumstances, it seems that this weekend I'll have to satisfy myself by playing with these great maps of vintage photographs. Pastvu is a Russian website which allows you to view thousands of vintage photos of locations around the world. Don't worry if you don't speak Russian as Pastvu's map based navigation system makes the historical photos a breeze to find and browse.

REPRESENTACIÓN FOTOGRÁFICA Y AUDIOVISUAL DE LOS INDÍGENAS AMERICANOS. The Real-Time Sounds of the World. Right now I'm listening to the sound of the rain falling on the roof of Maweni Farm in Tanzania. 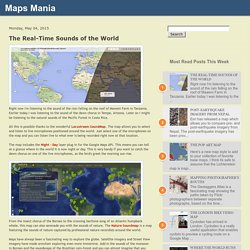 Earlier today I was listening to the sound of the dawn chorus in Tempe, Arizona. Later on I might be listening to the natural sounds of the Pacific Forest in Costa Rica. All this is possible thanks to the wonderful Locustream SoundMap. The map allows you to select and listen to live microphones positioned around the world. Just select one of the microphones on the map and you can listen live to what ever is being recorded right now at that location. The map includes the Night - Day layer plug-in for the Google Maps API. 18th Century shipping mapped using 21st Century technology. Last month we looked at an example of an old mapping style being applied to modern data. 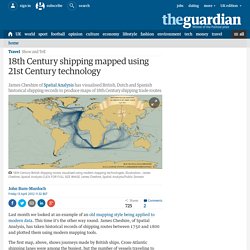 This time it's the other way round. James Cheshire, of Spatial Analysis, has taken historical records of shipping routes between 1750 and 1800 and plotted them using modern mapping tools. The first map, above, shows journeys made by British ships. NatGeo Mapmaker Interactive. From Paper Maps to the Web: A DIY Digital Maps Primer. Leer versión en español Lire en Français I was invited to the National Library of Colombia’s 2nd Digital Book Week as a speaker and to give a workshop on digital mapping tools. 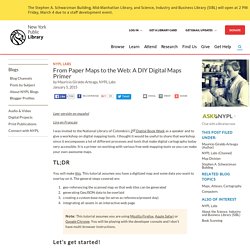 I thought it would be useful to share that workshop since it encompasses a lot of different processes and tools that make digital cartography today very accessible. It is a primer on working with various free web mapping tools so you can make your own awesome maps. You will make this. Geo-referencing the scanned map so that web tiles can be generated generating GeoJSON data to be overlaid creating a custom base map (to serve as reference/present day) integrating all assets in an interactive web page Note: This tutorial assumes you are using Mozilla Firefox, Apple Safari or Google Chrome. Let’s get started! This is what we want to make. 1) Geo-referencing The first step after scanning a map is to add geographical data to it; to establish an equivalence between its pixels and the geographic location they represent. 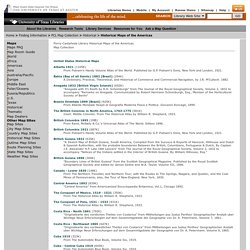 Welcome! - WorldMap. Old Maps Online. WhatWasThere - Put history in its place! Historypin. Fotobanco. Cultural Institute. Photos of The Great War. It was supposed to be the war to end war. 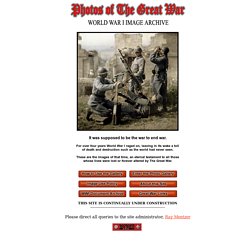 For over four years World War I raged on, leaving in its wake a toll of death and destruction such as the world had never seen. These are the images of that time, an eternal testament to all those whose lives were lost or forever altered by The Great War. Home. Explorar. Imágenes de Google.