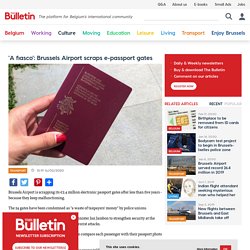 The 24 gates have been condemned as "a waste of taxpayers' money" by police unions. They were introduced by former interior minister Jan Jambon to strengthen security at the Zaventem terminal against the threat of terrorist attacks. The gates use face recognition technology to compare each passenger with their passport photo - and only open if there is a match. "But they were constantly defective," a police source told De Standaard. The system often failed to detect a match - and in one case it allowed a female passenger through when she had scanned her husband's passport.

"It was promised that they would save manpower, which could then be deployed elsewhere," the police source added. A federal police spokesman said: "We will replace them with a more efficient system. " "It is a real fiasco," said Carlo Medo, from the NSPV police union. Health apps pose 'unprecedented' privacy risks. Image copyright Thinkstock Using popular health apps could mean private information about medical conditions is not kept confidential, researchers warn. 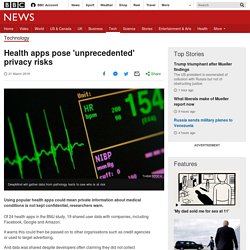 Of 24 health apps in the BMJ study, 19 shared user data with companies, including Facebook, Google and Amazon. It warns this could then be passed on to other organisations such as credit agencies or used to target advertising. And data was shared despite developers often claiming they did not collect personally identifiable information. Media playback is unsupported on your device Users could be easily identified by piecing together data such as their Android phone's unique address, the study says.

Biometric monitors bring fresh privacy concerns to pro sports. I have been a sports fan my entire life. 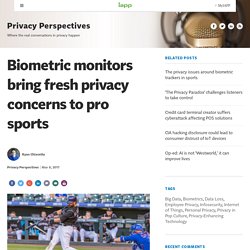 Ever since my dad took me to my first baseball game, where Boston Red Sox right fielder Darren Bragg hit a grand slam off of then-Seattle Mariners super-mullet fireballer Randy Johnson, I was hooked. (I might also be the only person who remembers Darren Bragg, besides Darren Bragg). Watching countless games on TV, I’ve seen the evolution of the TV broadcasts go from simple graphics to an overwhelming onslaught of information. Ever since I started working at the IAPP, it’s been hard not to view everything without thinking about all the privacy implications surrounding the things I love.

Take this example from our Sam Pfeifle, who wrote last summer about the coverage of the 2016 Summer Olympics and how the athletes were constantly put under an invasive spotlight. For example, a continuous biometric monitor has been spotted on two different National Basketball Association players during the last two seasons. No Harm, No Foul: Court Dismisses Biometric Data Privacy Class Action Against NBA 2K Games. Background Take-Two’s NBA 2K15 and NBA 2K16 games contained a “MyPlayer” feature allowing users to create custom in-game characters based on detailed 3D facial scans using a webcam or other peripheral device. 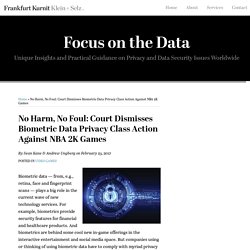 BIPA safeguards the use of biometric data by private entities in connection with financial or commercial transactions, and regulates the collection, distribution and storage of biometric data, which includes unique personal identifiers such as retina scans, fingerprints, voiceprints, or scans of the hand or face. BIPA requires companies to disclose their procedures and data retention policies, and obtain customer consent before collecting or transferring the data. BIPA also sets the “standard of care” for data security measures, and provides that individuals “aggrieved” can sue to recover attorney’s fees and statutory damages of up to $5,000 per violation. The plaintiffs’ suit, entitled Vigil, et al. v.

Motion to Dismiss Takeaway. Mashable. "Indians in general have yet to understand the meaning and essence of privacy," says Member of Parliament, Tathagata Satpathy. 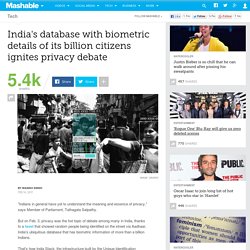 But on Feb. 3, privacy was the hot topic of debate among many in India, thanks to a tweet that showed random people being identified on the street via Aadhaar, India's ubiquitous database that has biometric information of more than a billion Indians. That's how India Stack, the infrastructure built by the Unique Identification Authority of India (UIDAI), welcomed OnGrid, a privately owned company that is going to tap on the world's largest biometrics system, conjuring images of Minority Report style surveillance. But how did India get here? Biometrics. Biometrics privacy security. Biometrics.