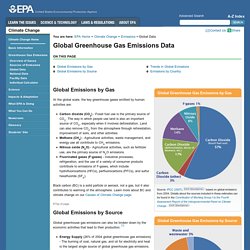 The way in which people use land is also an important source of CO2, especially when it involves deforestation. Land can also remove CO2 from the atmosphere through reforestation, improvement of soils, and other activities. Methane (CH4) - Agricultural activities, waste management, and energy use all contribute to CH4 emissions. Black carbon (BC) is a solid particle or aerosol, not a gas, but it also contributes to warming of the atmosphere.

Top of page Global Emissions by Source Global greenhouse gas emissions can also be broken down by the economic activities that lead to their production. [1] Energy Supply (26% of 2004 global greenhouse gas emissions) - The burning of coal, natural gas, and oil for electricity and heat is the largest single source of global greenhouse gas emissions. Trends in Global Emissions. Australia's Wildfires Are Getting Worse Because of Climate Change - Businessweek. Tony Abbott wrong on coal being ‘good for humanity’, Oxfam report finds. Tony Abbott is mistaken in claiming coal is “good for humanity”, with the fossil fuel causing numerous health problems and ineffective in delivering electricity to the world’s poor compared with renewables, a new Oxfam report has found. 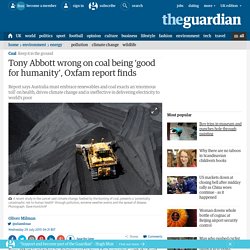 The Powering Up Against Poverty study argues the Australian government’s continued embrace of coal exports is out of step with an international shift towards clean energy and would do little to help the one in seven of the world’s population who do not have electricity to light their homes or cook food. For Tony Abbott, it's full steam ahead on coal, 'the foundation of prosperity' If, as the environment movement contends, fossil fuels are the new tobacco, then Australia has cast itself as a sort of swaggering Marlboro man, puffing away contentedly as the rest of the world looks on quizzically. 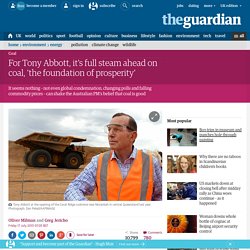 As other countries look to transition to low-carbon alternatives with one eye on crunch climate talks in Paris later this year, Australia is pushing ahead with an expansion in coal extraction that its conservative prime minister Tony Abbott insists is “good for humanity”. A series of huge mines planned for outback Queensland would, at capacity, produce nearly enough coal to match Germany’s total greenhouse gas emissions.

The federal government has just approved another mine, further south, on the fertile farming plains of New South Wales. It will be allowed to operate until 2046, a full 26 years after the point when the Intergovernmental Panel on Climate Change suggests the world should stop emissions rising to avoid disastrous global warming. Australia ranked worst-performing developed nation on climate performance. Could not load plugins: File not found 'Outrage' at climate stance Australia's decision not to contribute to a global climate fund has been greeted by outrage and disbelief at an international conference in Peru, according to the Climate Institute. 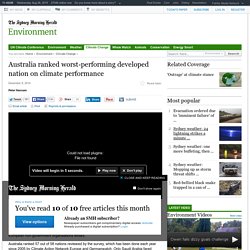 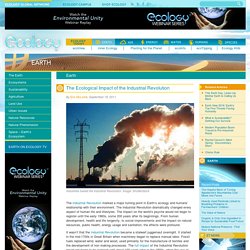 Image: ShutterStock The Industrial Revolution marked a major turning point in Earth’s ecology and humans’ relationship with their environment. The Industrial Revolution dramatically changed every aspect of human life and lifestyles. The impact on the world’s psyche would not begin to register until the early 1960s, some 200 years after its beginnings. From human development, health and life longevity, to social improvements and the impact on natural resources, public health, energy usage and sanitation, the effects were profound. Global Warming Has Begun, Expert Tells Senate. WASHINGTON, June 23— The earth has been warmer in the first five months of this year than in any comparable period since measurements began 130 years ago, and the higher temperatures can now be attributed to a long-expected global warming trend linked to pollution, a space agency scientist reported today. 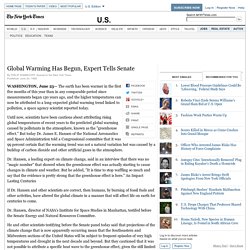 Until now, scientists have been cautious about attributing rising global temperatures of recent years to the predicted global warming caused by pollutants in the atmosphere, known as the ''greenhouse effect.'' 20 Years of Effort and Achievement. UNFCCC -- 20 Years of Effort and Achievement Key Milestones in the Evolution of International Climate Policy November 1988 IPCC Established World Meteorological Organization WMO and UN Environment Programme UNEP establish the Intergovernmental Panel on Climate Change IPCC. 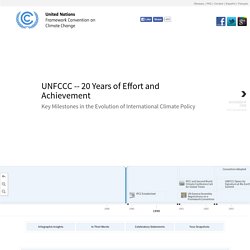 To this day IPCC assessments are the scientific underpinning of international negotiations while also providing unique insights into, for example, managing the risk of extreme events and disasters. What else happened: NASA scientist James Hansen testifies to U.S. November 1990 IPCC and Second World Climate Conference Call for Global Treaty. National Centers for Environmental Information (NCEI) Consensus. Multiple studies published in peer-reviewed scientific journals1 show that 97 percent or more of actively publishing climate scientists agree: Climate-warming trends over the past century are extremely likely due to human activities. 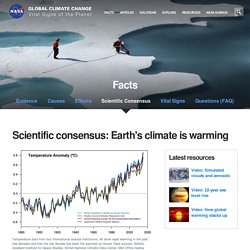 In addition, most of the leading scientific organizations worldwide have issued public statements endorsing this position. The following is a partial list of these organizations, along with links to their published statements and a selection of related resources. Statement on climate change from 18 scientific associations. Emaciated polar bear pictures raise global warming concerns.

Paul Nicklen, a scientist at the University of Alberta who studies polar bears, agreed with the assessment that the bear had starved to death. 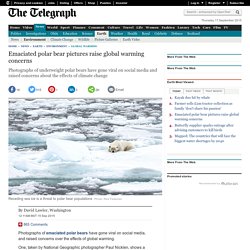 “You can’t say 100 per cent that it starved to death, but that’s probably what happened," he told Mashable. Urban growth meets climate change: Asia proves need for integrated approach. As countries make final preparations for this month’s UN summit in New York to agree the post-2015 development agenda, there is a growing need for policies that take an integrated approach to climate change and urban crises. 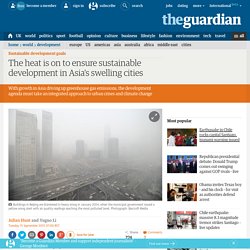 Ground zero is Asia, where 60% of the world’s population live. Asia’s conurbations are transforming faster than ever, with their geographies and populations doubling in less than 10 years. As the continent consumes ever-greater natural resources and discharges more waste, cities are generally not able to keep air pollution levels within international health standards. There is now a greater incidence of illness and death among the elderly and vulnerable, including young children. Furthermore, many Asian – and also African – cities are losing the vital contribution that green spaces make to public health, despite studies showing that parks and roadside trees are cost-effective measures against high temperatures, pollution and flooding. Global Warming Effects Map - Effects of Global Warming. Organic can feed the world. Wednesday, December 10, 2014. YOURHOME-6-HousingOfFuture-1-AdaptingClimateChange-(4Dec13).pdf.