Smoked Spare Ribs that Literally Fall Apart. I receive emails every week asking how to make super tender spare ribs in the smoker and some even say that the 3-2-1 method still doesn't get them as tender as they like. 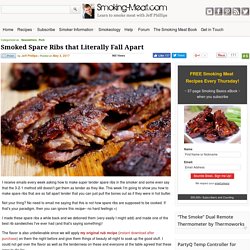 This week I'm going to show you how to make spare ribs that are so fall apart tender that you can just pull the bones out as if they were in hot butter. Not your thing? No need to email me saying that this is not how spare ribs are supposed to be cooked. If that's your paradigm, then you can ignore this recipe– no hard feelings =) I made these spare ribs a while back and we deboned them (very easily I might add) and made one of the best rib sandwiches I've ever had (and that's saying something)!

The flavor is also unbelievable since we will apply my original rub recipe (instant download after purchase) on them the night before and give them things of beauty all night to soak up the good stuff. Get the Recipes for Jeff’s Rub and Sauce Remove the spare ribs from the package and rinse under cold water. How to Grill Frozen Steaks. What if you could take steaks directly from the freezer to the grill, and have perfect results on the table in only 30-40 minutes? 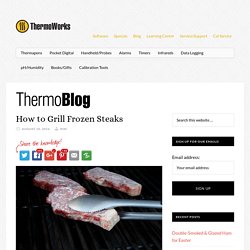 If you do it the right way, you may even find you prefer this method. More and more chefs are recommending cooking frozen steaks, and we’ve got the key temperatures to help you understand how to grill them right. Why Grill A Frozen Steak? ➤ A Dinner-Planning Time Saver for Busy Weeknights Grilling is a quick cooking method that is ideal for whipping up a quick meal any night of the week. The thought of taking a rock-solid piece of frozen meat and placing it on a ripping-hot grill seems contradictory to traditional cooking, but it is a well-vetted method. ➤ More Perfect From Edge to Edge.

Perfect Temperatures for BBQ Chicken. Are you looking for an easy BBQ project for the weekend? 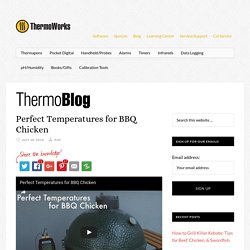 Why not smoke a whole chicken? It’s a project that’s inexpensive and quick-cooking even with the low cooking temperatures of smoking. Temperature is a critical component to the perfect cook for tender, succulent BBQ chicken. We have the precision tools along with chicken cooking and doneness temps to set you up for smoky success! E-Z Marinated Swordfish - Printer Friendly. Slow Cooker John Wayne Casserole - The Magical Slow Cooker. Not your average recipe today! 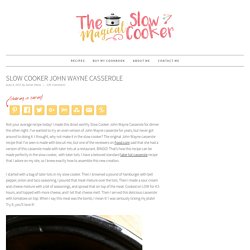 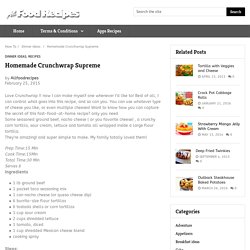 Now I can make myself one whenever I’d like to! Best of all, I can control what goes into this recipe, and so can you. You can use whatever type of cheese you like, or even multiple cheeses! Bang Bang Shrimp Pasta! This is one of my families favorite meals and what makes it even better? 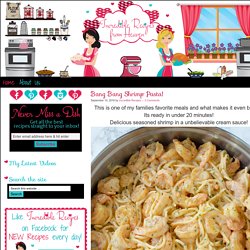 Its ready in under 20 minutes! Delicious seasoned shrimp in a unbelievable cream sauce! Its such an easy and fantastic recipe, everyone is sure to adore! Sheet Pan Shrimp Boil. Easiest shrimp boil ever! 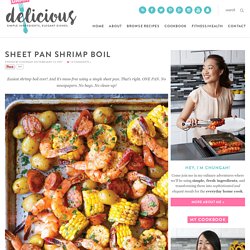 And it’s mess-free using a single sheet pan. That’s right. ONE PAN. No newspapers. No bags. I have a hot date waiting for me… Dish.allrecipes. The ultimate Buffalo wing experience is just 3 steps away. 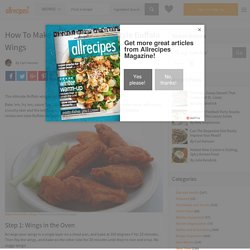 Bake ’em, fry ’em, sauce ’em. This classic triple-threat restaurant trick creates wings with crispy, crunchy skin and the tenderest, most juicy meat. Here’s how to make the ultimate restaurant-style Buffalo wings happen in your home kitchen. Step 1: Wings in the Oven Arrange your wings in a single layer on a sheet pan, and bake at 350 degrees F for 25 minutes. Roast Sticky Chicken-Rotisserie Style Recipe. Slow Cooker Ribs with Coca-Cola. Oh goodness I can not tell you how tender and tasty these Slow Cooker Ribs with Coca-Cola are. 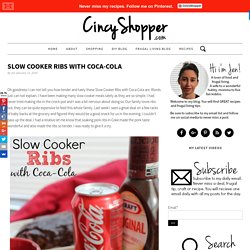 Words just can not explain. I have been making many slow cooker meals lately as they are so simple. I had never tried making ribs in the crock-pot and I was a bit nervous about doing so. Our family loves ribs but, they can be quite expensive to feed this whole family. Last week I seen a great deal on a few racks of baby backs at the grocery and figured they would be a good snack for us in the evening. Making ribs always seems like such a long process either on the grill or in the oven. INGREDIENTS 1 rack Pork Baby Back Ribs 1 can Coca-Cola Salt and Pepper 1/2 bottle Barbecue Sauce DIRECTIONS Salt and pepper ribs on both sides. Marinara Sauce Recipe : Giada De Laurentiis. Marinara Sauce Recipe : Ina Garten. Alfredo Sauce Recipe : Ree Drummond. Olive Garden Alfredo Sauce. Creamy Chicken and Mushroom Soup by Damn Delicious An easy, no-fuss dish you can make right at home with ingredients that you already have on hand. 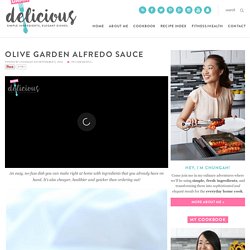 It’s also cheaper, healthier and quicker than ordering out! I woke up one morning with a huge craving for alfredo sauce. I don’t know what it was but I just had to have it right then and there. But delivery was going to take over an hour and Olive Garden was about 45 minutes away. At that point, I was almost even tempted to buy those jarred alfredo sauces. But after perusing through my pantry, I realized that I had all the ingredients to make the Olive Garden alfredo sauce right at home. And as always, the homemade version really knocked it out of the park. Amish Country Pasta Casserole – 12 Tomatoes.

Almost-Famous Animal-Style Burgers Recipe. Almost-Famous Animal-Style Burgers Recipe. One Pot Pasta. The easiest, most amazing pasta you will ever make. Even the pasta gets cooked right in the pot. How easy is that?! With Jason’s graduation today and our upcoming move back to Los Angeles in the next couple of weeks, we’ve been scrambling here left and right. We’ve been resorting to either take-out or skipped dinners altogether. Either way, cooking at home has been a bit tough. Now this is probably the easiest pasta dish you will ever make in your entire life. So the next time you want to overload on Thai take-out, this pasta is a must. Cajun Chicken Pasta Recipe. Cajun Chicken Pasta Recipe.

Slow Cooker Beef Stroganoff I Recipe. BBQ Chicken Breasts. The most tender, juicy chicken grilled to PERFECTION, smothered in a thick, homemade BBQ sauce. You can also make this ahead of time! Summer is not one of my favorite seasons. For starters, I like sweater season. Because I can typically sneak in an extra serving of fries underneath my clunky grandma sweaters. But I think this BBQ chicken was a legit game changer for me.

Chicken Lazone. Vegetable Lasagna Rolls. Baked Omelet Recipe. Shrimp Carbonara. Restaurant-quality pasta made right at home in 25 minutes. Not to mention the creamy sauce with crisp bacon and tender-juicy shrimp! Crisp bacon bits. You Won't Be Single For Long Vodka Cream Pasta Recipe : Rachael Ray. How To Cook Perfect Prime Rib Roast. Cajun Chicken Pasta. Oven-Baked Reuben Casserole – 12 Tomatoes. When it comes to classics, a good ol' Reuben sandwich never fails to hit the spot. Seriously, there isn't much that grilled-to-perfection, gooey sandwich can't cure, but it can be rather a hassle to make ourselves, so we decided to come up with an easier way to whip up a big batch that'll feed a crowd: a reuben casserole! Filled with rye bread cubes, your choice of pastrami or corned beef, sauerkraut, pickles and Thousand Island dressing, this casserole tastes just like our favorite hot sammy, and we didn't have to stand over the hot stove to make it!

Pizza Cake - Thinkarete. Pillsbury is cray cray with this idea. Totally executable by any home cook, so I would suggest trying this out once a year on a special someone that would rather have this than your traditional cake. pizza cakepizza cake. Swedish Meatballs. Nothing beats homemade meatballs smothered in a creamy gravy sauce, and yes, they taste so much better than the IKEA version! Remember those trips to Ikea where the budget-friendly furniture finds are the last things on your mind but all you can think about are those amazing swedish meatballs? Well, that was always me. But since we’ve moved to the Bay Area, our nearest Ikea is in the middle of the most trafficked area in the entire city so it’s really hard to get my swedish meatball fix when needed.