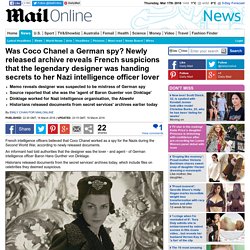 An informant had told authorities that the designer was the lover - and agent - of German intelligence officer Baron Hans Gunther von Dinklage. Historians released documents from the secret services' archives today, which include files on celebrities they deemed suspicious. French intelligence officers believed that Coco Chanel worked as a spy for the Nazis during the Second World War, according to newly released documents.

Twitter. JFK and Jacqueline in the streets of New York, 1960. Follow @dfest88. A model during a photo shoot distracted by first plane hitting the twin towers. Untitled. Throughout history, things have changed, but people stay the same. 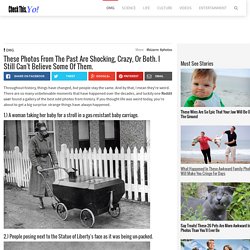 And by that, I mean they're weird. There are so many unbelievable moments that have happened over the decades, and luckily one Reddit user found a gallery of the best odd photos from history. If you thought life was weird today, you're about to get a big surprise: strange things have always happened. 1.) 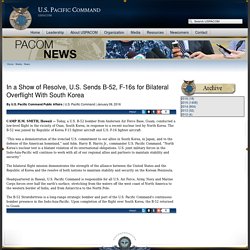 Pacific Command Public Affairs | U.S. Pacific Command | January 09, 2016 CAMP H.M. SMITH, Hawaii -- Today, a U.S. B-52 bomber from Andersen Air Force Base, Guam, conducted a low-level flight in the vicinity of Osan, South Korea, in response to a recent nuclear test by North Korea. Adolf Hitler feeding a fawn from his hand, circa 1930s. A River of Blood floods the Tower moat In London. The First World War was named "The Great War", the War to end all Wars and had the brutal number of casualties to prove it's claim. 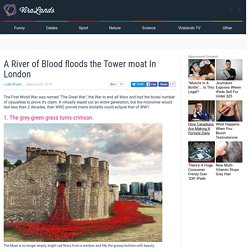 It virtually wiped out an entire generation, but the misnomer would last less than 2 decades, then WW2 proved man's brutality could eclipse that of WW1. 1. James Donovan: The hero behind the Cold War spy swap. James Donovan with his client, Russian spy Rudolf Abel in 1957 As he jingled the nickels in his hand he noticed that one was lighter than the rest. 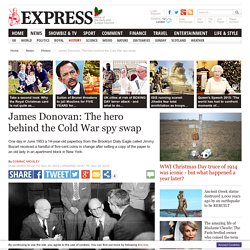 He let it drop to the pavement to test its durability only to see it break in two, revealing what turned out to be a tiny piece of microfilm. Death by moonlight: 75 years on from the devastating Luftwaffe blitz of Coventry. Just one night of bombing killed 568 men, women and children and left more than 1,200 people injured “The word embodied the idea of the physical and psychological destruction of an entire city,” explains historian Angus Calder. 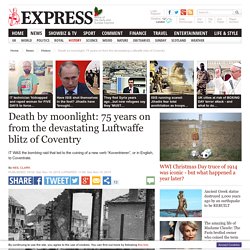 The Luftwaffe’s attack on Coventry, which took place exactly 75 years ago today, marked a new departure in the Blitz. On just one night 500 tons of high-explosive bombs and 30,000 incendiaries were dropped, killing 568 men, women and children and leaving 1,200 people injured, over 800 of them seriously. Death by moonlight: 75 years on from the devastating Luftwaffe blitz of Coventry. Adolf Hitler: Secret hideout Nazi leader could have fled to 'after faking his death' Archaeologists have discovered an outpost in a remote jungle in Argentina which is believed to have been built for some of the Führer's top aides. 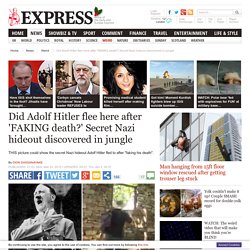 German coins from 1938 to 1944 were found in the hideout and experts predict the Nazis created the building as a safe haven in the event of their defeat. It comes after a Nazi-hunting author claimed Hitler faked his death and then fled to Paraguay via Argentina before settling in a small Brazilian town. In her book Hitler in Brazil - His Life and His Death, Simoni Renee Guerreiro Dias claimed the evil dictator did not die at the end of the Second World War. Instead of committing suicide with wife Eva Braun in a Berlin bunker on April 30 1945 Ms Dias says she has EVIDENCE Hitler lived until he was 95. NAZI lair covered in SWASTIKAS discovered in Argentina jungle. The ruins, close to the border with Paraguay, were reported to have Nazi symbols adorning the walls. 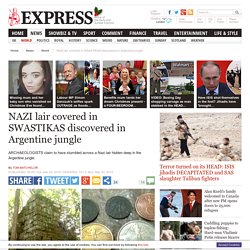 Explorers also found a stash of German coins from the 1930s and fragments of pottery with the words “Made in Germany” inscribed on them. Experts believe the hideout may have been used by war criminals seeking shelter from prosecutors after Germany’s defeat in 1945. Locals have long-believed that the vine-covered stone buildings were once home to Adolf Hitler’s private secretary, Martin Bormann, with signs guiding tourists to the site.

A propaganda magazine makes Adolf Hitler look like laughing stock. Deutschland Erwache Hitler banned publication of this image from an early Nazi propaganda book IN THE rubble of a house in bomb-blasted Germany a British soldier stooped to pick up a tattered, coverless book. 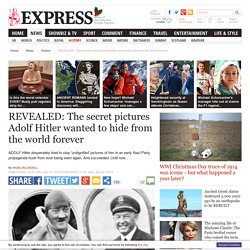 It had been damaged by water but, sensing it would make a good souvenir to show the folks back home, he tucked it into his canvas satchel. John Hoppy's medals were sold at auction for £24k. Flight Lieutenant John 'Hoppy' Hopgood's Distinguished Flying Cross and Bar was sold at auction yesterday for £24,000 and his family have donated the money to the charity WaterAid. 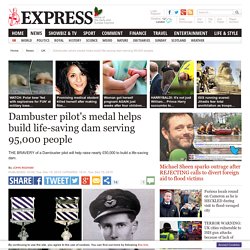 The collection fetched less than the pre-sale estimate of £40,000 but the Government has pledged to match the sale price. This means £48,000 will go towards building a dam in Uganda which will give 95,000 people access to clean water. Flt Lt Hopgood had already won the DFC twice for taking part in more than 40 raids when he was chosen by legendary 617 Squadron chief, Guy Gibson for the RAF's most famous raid in 1943. He received his medals from King George VI at Buckingham Palace just weeks before he died and never got to wear them. Adolf Hitler unseen pictures show him wearing lederhosen. Court snapper Heinrich Hoffmann did once capture the Fuehrer in the traditional short-trousered costume of Bavaria, plunging him into a rage.

"He no longer wanted to be thought of as being nothing more than a Bavarian or an Austrian," said fashion expert Esther Sünderhauf, "but as the leader of an entire German empire. "To that end he wanted total control over his image and not to leave himself open to nakedness and ridicule. He wore his clothes from 1933 onwards as a kind of armour that made him untouchable. " A propaganda magazine makes Adolf Hitler look like laughing stock. The INCREDIBLE picture that proves Adolf Hitler lived to 95 with his Brazilian lover. The evil dictator fled to Paraguay, via Argentina, before settling in a small town in the state of Mato Grosso, Brazil, according to a shocking book. Hitler is said to have used the assumed name of Adolf Leipzig and was known to the 12,000 locals in Nossa Senhora do Livramento as "the Old German". The man at the centre of the controversial claim is pictured, two years before his death in 1984, posing happily with his black girlfriend Cutinga.

Simoni Renee Guerreiro Dias, who wrote Hitler in Brazil - His Life and His Death, claims he was in the area hunting for buried treasure using a map given to him by friends withing the Vatican. She insists that Hitler was using his lover Cutinga to hide his true identity as a vile Aryan supremacist. Simoni, a Brazilian jew, refuses to accept that the Fuhrer shot himself in his Berlin bunker on April 30 1945.

The INCREDIBLE picture that proves Adolf Hitler lived to 95 with his Brazilian lover. 'There is no evidence' Scientists dash hopes of finding Nazi train full of gold and art. The missing carriages, carrying a loot of gems, weapons, art and gold, were said to have been hidden as Nazis fled at the end of the Second World War, carrying a loot of gems, weapons, art and gold. But researchers have presented their own findings, which say there might be a tunnel - but no train beneath the Polish town of Walbrzych. It was claimed that the train was hidden underground near Wroclaw as Soviet forces approached in 1945.

The Nazis had many miles of tunnels constructed near Walbrzych during the Second World War which were dug by prisoners. In August, Deputy Culture Minister Piotr Zuchowski said that ground-penetrating radar images had left him "99 per cent convinced" that a German military train was buried near Walbrzych. He said images appeared to show a train equipped with gun turrets. Prince Charles - Islamic State terror group will wipe Christians from Iraq in five years. The Prince of Wales described the protection of the Christian faith in the region as the “greatest challenge we face”. Around 250,000 Christians are still in Iraq but 100,000 of these have been displaced by fighting and the threat from Islamic State. Thousands more have fled the country - and neighbouring Syria - as ISIS continues its bloody terror campaign against those unwilling to pledge loyalty to the death cult.

Charles told a gathering of UK-based clerics that "emergency help" was needed to avert the disaster. Speaking at Archbishop House in central London about the threat to Christians in the Middle East he said: "Their suffering is symptomatic of a very real crisis which threatens the very existence of Christianity in the land of its birth. "This affects us all, consequently the greatest challenge we face is how to ensure the spiritual and cultural heritage of Christianity in the Middle East is preserved for future generations.” France secret links to Nazi Holocaust revealed. The secret archives were opened as France faces up to its Nazi shame. They relate to the so-called Vichy regime, led by Marshal Philippe Petain from 1940 to 1944 after the country’s defeat by Hitler’s Germany.

There was often enthusiastic collaboration with the Nazis by French police and paramilitaries during the Holocaust. Jews were rounded up as “enemies of the state” and sent to death camps in Germany. Many victims came from major cities including Paris, where occupying German forces worked closely with local officials. Nazis collaborators who helped kill French Jews to be named today. The Most Courageous Raid of WWII - Documentary Film. The First Day Of The Blitz. No bells rang out for Christmas in England in 1941; bells meant Nazi invasion. Medieval England’s ultimate treasure, The Domesday Book – Factually Royal. Medieval England’s ultimate treasure, The Domesday Book is associated with William the Conqueror’s effort to control England. Along with numerous castles throughout the country, the Domesday Book would offer William massive clout in England. On 25 December 1085, William ordered the survey to advance his tight grip on England, William I instructed that a book was put together comprised of evidence of all ownership throughout the land.

Watch SpaceX launch and land a rocket, and see how the world reacted. One of the greatest libraries of Judaica headed to auction at Sotheby’s. Rare Look At Iran in the 1960s and 1970s (35 Pics) - Atchuup! - Cool Stories Daily. Saudi Arabia Unveils 'Islamic Military Alliance' Against Terrorism. Saudi Arabia said Tuesday that 34 nations have agreed to form a new "Islamic military alliance" to fight terrorism. Queens Regnant: Maria I of Portugal - History of Royal Women. Jesse Owens wins gold in Nazi Germany, 1936. Colour Photos Of Nazi Germany Will Chill You To The Bone. Ancient Spooning Couple Discovered in Greece. Archaeologists digging in Greece stumbled upon a love scene 6,000 years in the making: a man and woman, buried with intertwined arms and legs, as if they were spooning.

Experts are still searching for clues as to why the couple was interred so deliberately. "There've only been a couple of prehistoric examples of this behavior around the world, but even when couples are buried together, they're beside each other and not typically touching. This couple was actually spooning. We assume they were partners of some kind, and because of DNA analysis, we do know they are male and female," noted archaeologist Michael Galaty. The spooning duo is believed to have died around 3800 B.C. and was discovered near the Alepotrypa Cave on Greece's Mediterranean coast. Gloucester Castle Discovered Beneath Prison Basketball Court. Survivors return to Pearl Harbor 74 years after attack. Today is December 7th, National Pearl Harbor Day, when we remember that "day of infamy" when 2,407 Americans lost...